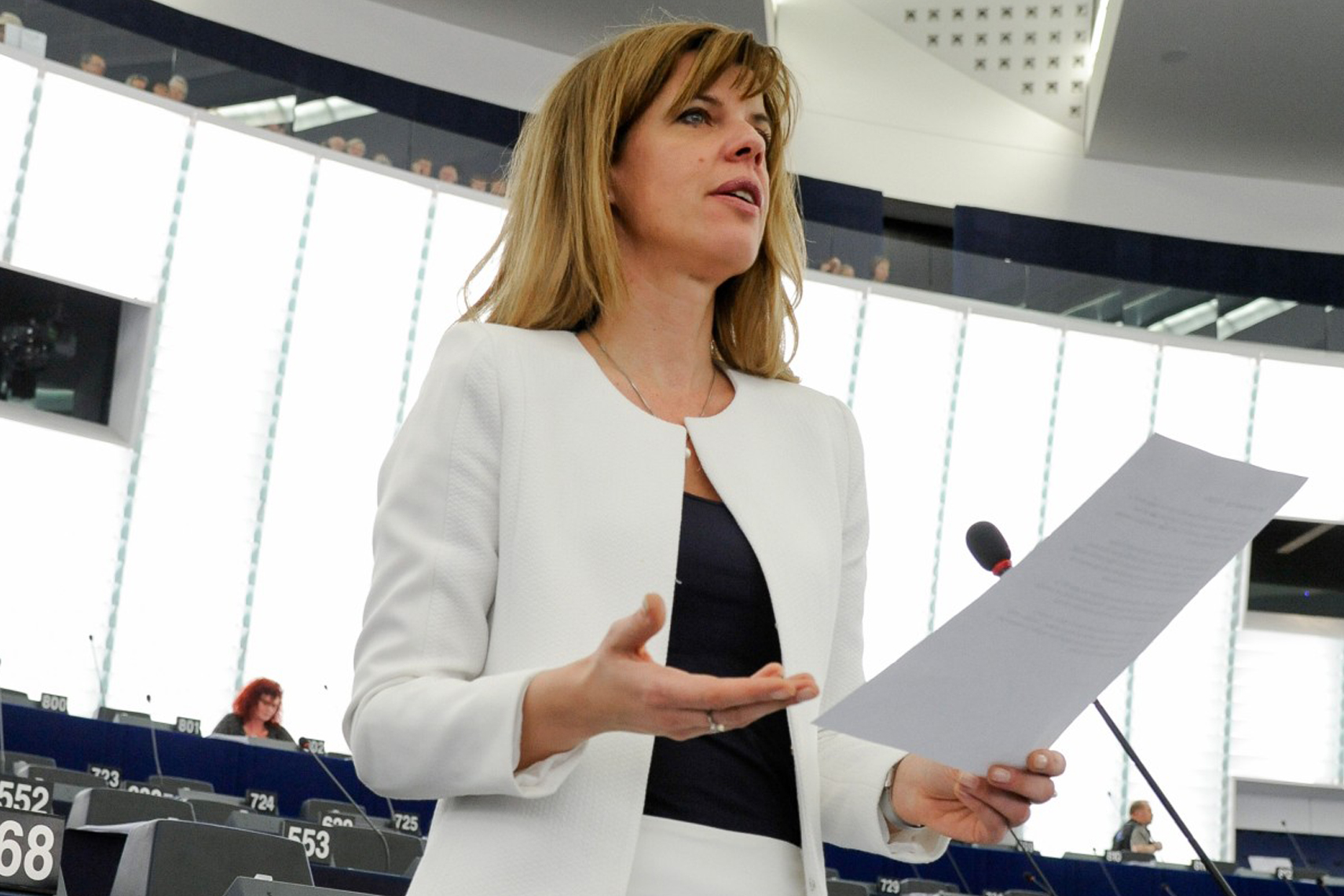 European Western Balkans continues with a series of interviews with key people from Western Balkans countries. This time we spoke with one of the first Members of European Parliament from Western Balkans. Ms. Biljana Borzan (@BiljanaBorzan), Member of European Parliament, is a prominent member of Socialdemocratic Party of Croatia. Ms. Borzan graduated at University of Zagreb’s Faculty of Medicine in Osijek. In 2006, Borzan began to specialize occupational and sports medicine. She is a member of the SDP since 1999. From the 2004 to 2008 Mrs. Borzan served as Vice President of the Main Board of the SDP Croatia. She was Deputy Mayor of City of Osijek from local elections in March 2008 until January 2009. At the parliamentary elections in 2007 Borzan was elected as an MP in the Croatian Parliament. Member of European Parliament from 2013. In the European Parliament from July 2014, Ms. Borzan is member of Committee on the Environment, Public Health and Food Safety together with Delegation to the EU – Former Yugoslav Republic of Macedonia Joint Parliamentary Committee. Ms. Borzan is also substitute member to the committees on gender equality, consumer protection and the Delegation to the EU – Montenegro (Stabilization and Association Parliamentary Committee).

Biljana Borzan, MEP: The European Union is a project whose main goal was to create the preconditions for a lasting peace among its member states. After the tragic experiences of the First and Second World War, Europe, especially France and Germany, needed a platform of cooperation that would bind its members economically and politically so any conflict becomes inconceivable. As it turned out, the vision of Schumann, Monnet and others proved to be successful. Those who advocate the deconstruction of the EU have forgotten how valuable peace is and how expensive war can be. We in the Western Balkans have somewhat fresher experiences, therefore I consider myself to be a friend of the EU and I believe that, by entering  the Union, Croatia made the most important geopolitical step since independence.

EWB: Croatia is the first country in the Western Balkans which joined the EU. From today’s perspective, how do you look on the integration process before full membership of Croatia into EU?

BB: After a year in the Union, it is clear that Croatia went through a more significant transformation during the process of negotiation rather than after it. The life of an average Croatian citizen changed more during the preparation than after accession. The value of the preparation for membership is reflected in this fact. After ten years of adjustment and difficult reform of politics and values, Croatia is now arguably a better place to live. Unfortunately, we had the misfortune to enter the EU during a severe economic crisis.

Looking back on the negotiations, sometimes it seemed we were unjustly and unfairly blocked, that the demands of the European Commission and some member states were exaggerated. And indeed they were, but the reality is that sometimes a candidate country must make concessions to reach the final goal.

EWB: What was the role of Parliament of Republic of Croatia in the process of integration, and what is today during the EU membership? Is there cooperation with the citizens’representatives from Zagreb and Brussels?

BB:During the process of accession, the Parliament of Republic of Croatia played a key role because under the Constitution, Parliament has the task of protecting the national sovereignty and the accession to the European Union implied the transfer of sovereignty on the part of EU institutions. From a legislative perspective, parliament had to pass hundreds of laws and amendments to laws to harmonize Croatian legislation with EU legislation. Today the Parliament oversees almost all European legislation as the departmental Committee for European Affairs provides an assessment of subsidiary, for example assessing whether an act is under the jurisdiction of Croatia or the EU. In regards to the cooperation between us and the colleagues from the Parliament I believe it is good. Colleagues often come to Brussels for meetings of various inter-parliamentary bodies, and regularly communicate about issues of acts that are particularly important for Croatia. As a member of the Committee on the Environment, Public Health and Food Safety of the European Parliament I am in constant touch with its counterpart committee from the Parliament of Croatia.

EWB: How does the European Parliament cooperates with the parliaments of the candidate countries and potential candidates countries?

BB: Primarily through joint parliamentary delegations or delegations for the Stabilization and Association. These bodies are a platform for the exchange of information and initiatives and streamlining the accession process. At the last plenary session the European Parliament voted on the composition of these bodies and I am a member of the Delegation on Relations with Macedonia and substitute on the Delegation on Relations with Montenegro.

EWB: Do you think that, in addition to the harmonization of the laws and policies with the EU, should be lead to changes in the ratio of Ministers, MPs or local officials to their responsibilities? In which direction these changes should be directed?

BB: This is not something that should be linked to European integration, but common sense and good practice. However, it seems that in this region the easiest way to implement substantial changes is under outside coercion. I can say that the change in the way how politicians perceive their responsibilities is evident in Croatia, in respect to ten years ago. Some have not changed because they didn’t to, and some did a makeover because they needed to be acceptable to Europe. Without the transformation of society and politics, it would be not possible for former Prime Minister Ivo Sanader to be tried and jailed for corruption. I have to note that the EU is facing a major challenge in the implementation of reforms in Bosnia and Herzegovina, their political elites have proven especially resilient to changes.

EWB: How is the acceptance of European standards, regardless of membership in the EU, important for citizens of Western Balkans?

BB: Adoption of European standards is more important for the citizens than the membership itself.Countries and societies do not change on the date of accession, they change during pre-accession process. From this perspective,is was perhaps good for Croatia that our path towards the EU took so long.

EWB: What is it that you consider particularly important for the further integration of the Western Balkans in EU?

BB: The political will of the European Commission and EU member states is the first and foremost condition for the continuation of the process of EU enlargement in the Western Balkans. In his inaugural speech, the new president of the European Commission, Jean-Claude Juncker said that during his five years the EU will not expand. Croatia has negotiated for almost a decade, and that happened during a much more favorable period for the Union. I’m afraid that the European economic and political turmoil somewhat narrowed the perspective of membership for the countries in the region. Elections for the European Parliament signaled arise of euroscepticism among citizens, and some of the countries of Western Europe will be difficult to convince the Union has to expand in the medium term. This does not mean that the ongoing processes will be stopped though. Let me remind you that Croatian path towards the EU took ten years.

EWB: Do you have advice to your counterparts from the Western Balkans countries?

BB: Each successive wave of EU enlargement put more stringent and complicated conditions before the candidate countries. Croatia has had to meet a number of conditions and mechanisms Slovenia did not. So logic dictates that it will be the same for other Western Balkan countries. Judging from our experiences, they will need a lot of patience, nerves and painful reforms. There were moments when it seemed that the Croatia was hopelessly stuck, but we were lucky that all major political actors in the country regarded EU membership as a priority. This national consensus was crucial in some difficult moments. Furthermore, it is crucial to have “friends” in the EU, countries that will be able to jump start the process when it gets stalled.

EWB: Thank you Ms. Borzan. European Western Balkans wishes you very best in your future activities in the European Parliament. We will surely accompany you work at Delegations to the EU – Former Yugoslav Republic of Macedonia Joint Parliamentary Committee and Delegation to the EU – Montenegro SAPC.