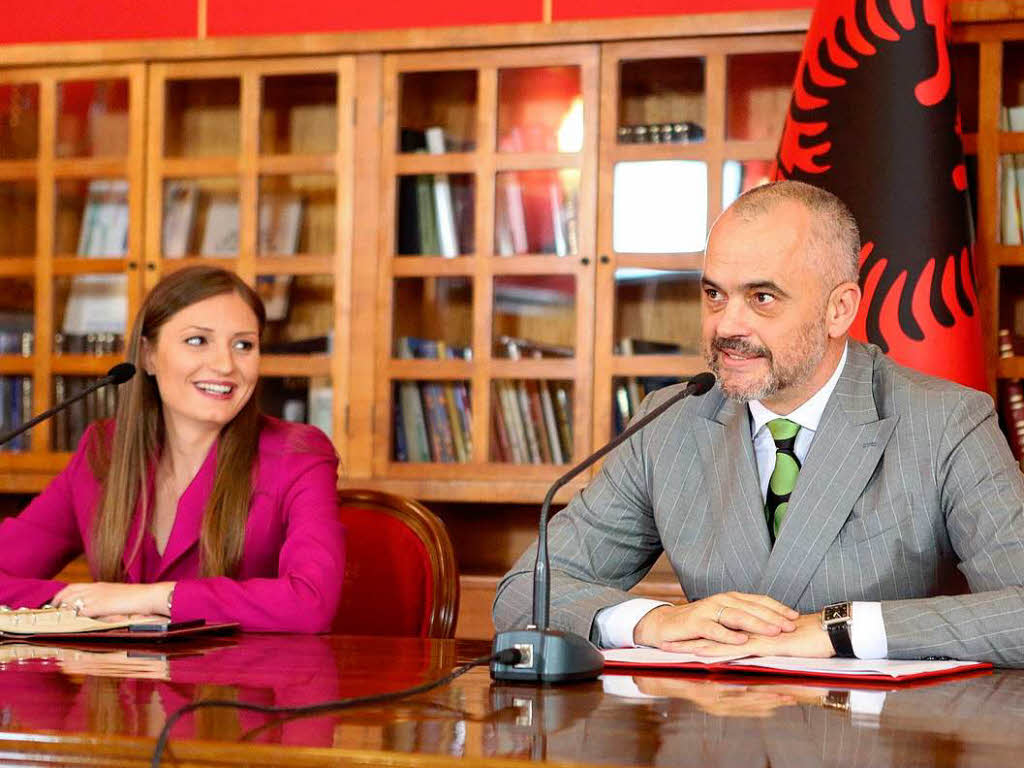 European Western Balkans continues with series of interviews with key people from Western Balkans countries which are involved in European integration process of their countries. Ms. Klajda Gjosha is Minister of European Integration of Republic of Albania from September 2013. Ms. Gojsha, the youngest minister in Albanian Government, holds a Master’s Degree in European Studies from the University of Reading, United Kingdom where she earned her Bachelor Degree in Political Sciences and International Relations too. Ms. Gjosha held the office of the Deputy Minister of Labour, Social Affairs and Equal Opportunities (2012 – 2013). Since 2012 she is Deputy Chair of the Socialist Movement for Integration and Member of the Chairmanship, and also holds the Chair of the SMI Women Forum. Ms. Gjosha held various important offices in other institutions, such as Tirana Municipality, Tirana Regional Employment Directorate and National Tourism Agency.

European Western Balkans: Thank you Ms. Gjosha for your time. At the begging can you tell us what is your personal opinion about the European Union and about the importance of integration of Albania and the region of Western Balkans in the EU?

Ms. Klajda Gjosha: European Union is a success model that, despite all challenges it has had to overcome, still inspires million of people. It is a model that affirms the strength of common values share by people. In this context, Albania’s and Western Balkans’ integration in this Union is of primary importance not only for our countries, but also for the EU itself, which was established on the principle of unity and not exclusion. I am sure that by the side of other EU countries, Albania would be a more democratic, free and developed country. Albania would provide more opportunities and a better life for its citizens and the generations to come. The same holds true for our neighbours. The future of the Western Balkans is one and only: as a part of the European family.

EWB: What is the role of Minister of European Integration in Albanian Government?

EWB: Can you shortly evaluate where is Albania in European integration? What are your future plans of the Government in EU integration process?

KG:  Candidate status opens up a new phase for Albania in the EU integration process. Now, we are closer to Europe, but we are aware that now starts the hardest work. Another step is the screening process that our country will go through and the opening of negotiations. The government has the utmost commitment and engagement to advance the EU integration agenda. We are working on meeting the five key priorities set out by the European Union, specifically: establish an efficient and depoliticised administration, strengthen the independence of justice bodies, reinforce the fight against corruption, reinforce the fight against organised crime and ensure human rights. There is a roadmap in place with measures and tasks o be implemented by all institutions within clearly set deadlines. This roadmap is a government document that entrusts responsibilities to each institution. Reforms launched by the government – particularly the territorial and justice reforms – are indispensable in pushing forward with the EU integration process.

KG:  The EU integration process needs the adoption of the European standards in order to advance. In general, the integration process implies precisely that: adoption and adaptation of European standards. I think that for this to happen properly, a transformation of the whole society is required. Progress has been made along these years in many areas, particularly with the approximation of legislation which is one of the accession prerequisites. Still, much needs to be done, but we are on the right. That I can say for sure.

EWB: Are you as institution prepared for negotiation process? Are you preparing for the Acquis chapters? Do you know which one will be the most difficult?

KG:  Albanian institutions have the right commitment for all the phases of the integration process. It is a fact that the actual phase is a hard challenge, but I think that we have the adequate capacity and the assistance of our European partners to take things one at a time and successfully meet all the obligations.

EWB: Do you have consultation with your counterparts from other governments in the region which are included in the accession process or which are from member states? What are areas in which you cooperate?

KG:  Regional cooperation is intensive and unceasing with all our neighbours through a multitude of joint projects. I must underline that the future of the Western Balkans is with the European Union. Good neighbourly relations and mutual cooperation serve to develop our countries and without these the integration process can not be fully achieved.

EWB: What are the steps of Government of Albania for increasing of amount of use of IPA?

KG:  We have a new approach for programming EU financial assistance. Just a few months ago, the European Commission decided to allow Albania to manage the funds allocated by the EU. This is a sign of trust in this government. This is a first-time thing, just as the development of projects that will follow a sector-based approach; programming and management will be well-thought and timely, not leaving things for the last minute as this was often the case. Our goal is to develop projects with sustainable impact in the priority sectors.

EWB: What do you consider to be especially important for further integration of the Albania in the EU?

KG:  Justice reform is crucial in ensuring a smooth integration process, since it ensures strengthened rule of law and consolidated democracy, these two being fundamental principles of the establishment of the Union. Fulfilment of the five key priorities is equally crucial. The Albanian government is determined to fulfil the obligations and deliver results which, first and foremost, benefit our Albanian citizens.

EWB: Again thank you Ms. Gjosha for your time and answers. European Western Balkans wishes you very best in process of integration of Albania into European Union.

Joksimovic: No slowdown in screening-related talks