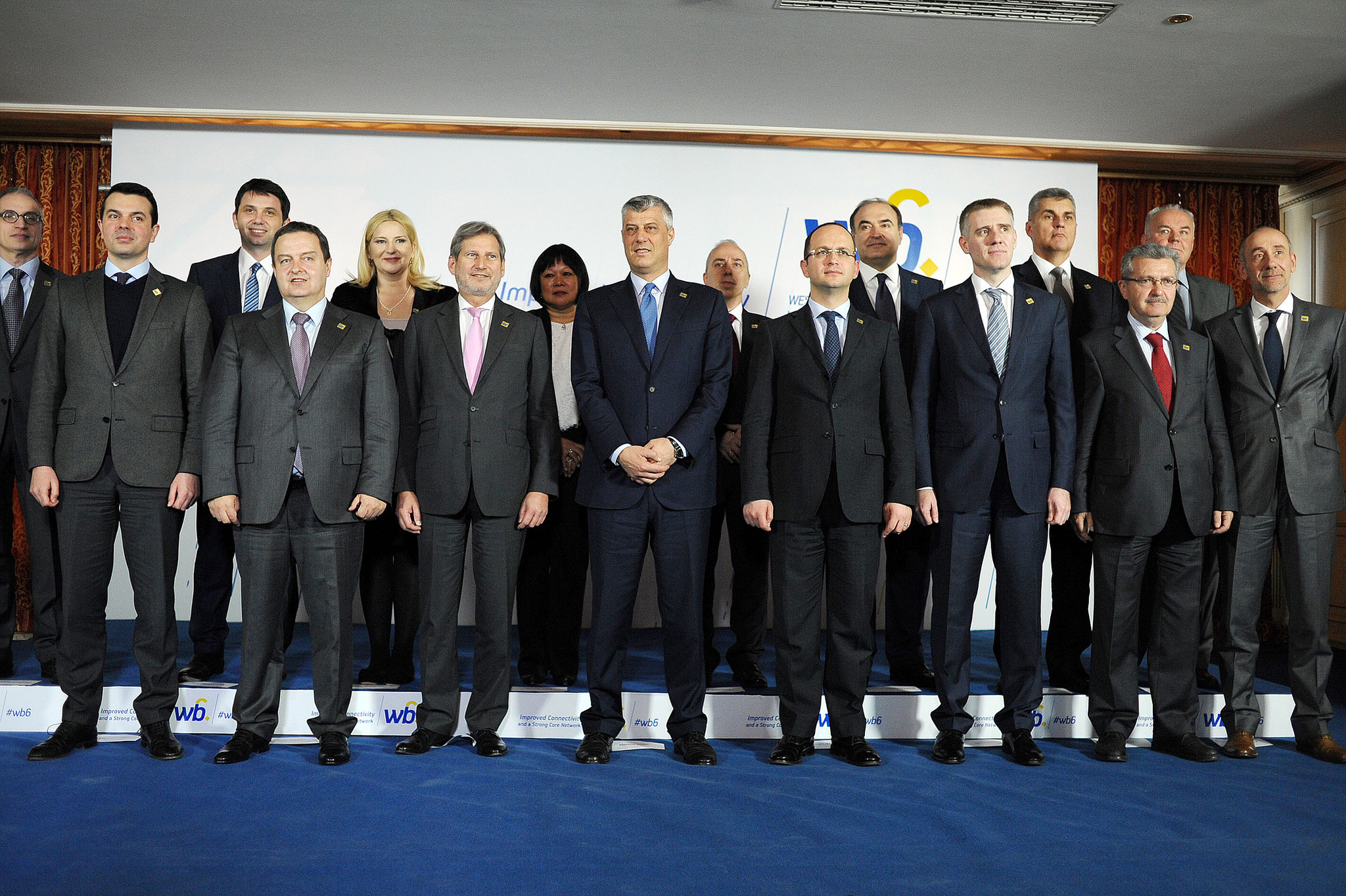 I am delighted to be with you today on the occasion of the first meeting within the Western Balkan 6 framework since taking up my mandate in November.

I would like to thank our hosts for offering to organise this meeting. It is the first time that a meeting in this format is organised in Pristina, and it perfectly illustrates the inclusive nature of our cooperation.

It is also important that our cooperation is effective. I therefore hope that today we will be able to reach agreement on the core transport network for the region.

On this day 198 years ago the world’s first fare paying passenger railway service started in Great Britain. The railway was not as you might expect in London, it was in South Wales, connecting the port of Swansea with it’s under developed hinterland, bringing access to jobs, markets and new opportunities.

The same simple lesson of two centuries ago applies today, perhaps more than ever: well-developed and interconnected infrastructure for transport and energy is a key driver for economic growth and jobs as well as for attracting new investments.

However, there are some other cautionary lessons to learn. First the railway was horse drawn, perhaps not the best choice for the 21st Century. Second, it stopped operating after a few years due to competition from a new toll road.

This is why the transport policy of the European Union aims to close the gaps between Member States’ transport networks and remove bottlenecks that still hamper the smooth functioning of the internal market.

Agreement on core network is vital

The main building block comprises the core network linking all capitals, main economic centres and major ports. These priority links only become part of the core network if Member States are able to commit to completing all related investments and other ‘soft’ measures by 2030.

The core network therefore involves focusing on the most important inter-connectors and ensuring that the countries have the necessary fiscal and budgetary means to complete them on time. This mutual commitment makes the process credible.

The aim is, therefore, not to have the largest possible regional core network but to focus on the most important segments which could be implemented within a reasonable time frame. We do not want “grand designs” we want “good designs”.

Mutual commitment is the essential foundation. It ensures the added value of the process and provides the necessary guarantee for each country that its investments will be worthwhile. And, each country knows that its neighbours share the same commitment to the same core network.

This is the framework into which we want to connect the Western Balkans, not just a physical connection, through road and rail but a political and legal connection as well.

If we add the regional core network to the Transport Community Treaty it will become legally binding for the Western Balkans as well as for the EU thereby further strengthening the credibility of the process.

I have spoken of the need to develop realistic plans but we must also be realistic when we look at how these plans will be financed.

Public funds are scarce and we need to get the maximum value for every Euro we spend. To deliver on the most important investments and bring real benefits sooner rather than later, there is a clear need to carefully select priorities and to explore all possible sources of funding including private capital.

The functioning of the National Investment Committees will be crucial in this regard. They bring together the Ministry of Finance, the relevant line ministries, the Commission, IFIs and the main actors of the private sector. They will be responsible for establishing single sector pipelines with the most relevant investment projects to be financed in the country over the medium term.

There are a lot of lessons which can be learned from existing National Investment Committees. We will hear later this morning about the Serbian experience with the sector pipelines.

I urge you to take as much inspiration as possible from this good practice and from other positive experiences from around Europe and the region.

Agreeing on this approach and methodology would send a clear signal – to your business, to your citizens and to potential investors – that you are determined to boost the economy in the Western Balkans by working closely together in the common interest.

Credible sector strategies and single sector pipelines are as important for us as they are for other investors. Theywill be pre-conditions for getting access to multi-country and national IPA funding for investment co-financing.

Let me also emphasise the importance of adding value to these investments. It is easy to think about connectivity in terms of the “hardware”, bridges, intersections and the like. But I would emphasise that, like a computer, the hardware needs software to operate effectively. And the better the software the easier it is for the hardware to maximise its potential.

Let me give an example: implementing EU standards of road safety will reinforce the added value of investments in infrastructure and connectivity.

There will be even greater gains if this is combined with more efficient border crossings. Obviously it makes little sense to invest heavily in state of the art roads or railways if trucks or trains get stuck at the borders.

The good news is that significant improvements can be made fairly rapidly in reducing transportation time at relatively low costs. In this regard, I look forward to the presentation later this morning about the joint work carried out by the authorities at the Hani e Elezit crossing point.

I have spoken about establishing a core transport network. This reflects the importance and the scale of the task ahead of us. But the connectivity agenda is not limited to transport. In the Energy sector, the Guidelines for trans-European energy infrastructure establish common rules for the timely development and interoperability of priority corridors.

Here too we need a strategic overview and a clear priority given to the Projects of Energy Community Interest (PECI).

We are working with Energy Community Secretariat to establish a short list of the most vital projects.

And for energy, just as with transport, operating under EU-compatible rules such as unbundling utilities or allowing third-party access will be an essential element of the connectivity agenda.

Next steps and the Vienna summit in August

At the start of my presentation I expressed the hope that here today we would be able to reach an agreement on the core network. Such an agreement would pave the way for the next steps.

Commissioner Bulc and I are looking forward to host your Prime Ministers on 21 April in Brussels. This will be the occasion to give the agreement we intend reaching today political confirmation at the very highest level.

Such a political commitment will be a strong signal of our mutual engagement in the connectivity agenda.

With the political commitment confirmed we can then work together to turn this commitment into action.

In June, we would use the TEN T days in Riga to organise a specific WB6 Ministerial to agree on the appointment of corridor coordinators.

The coordinators would help organise discussions where all relevant stakeholders work towards identifying short term regulatory and operational improvements as well as priority investments in cross border connections and bottlenecks for each extended corridor.

Finally, in August we would use the Vienna Summit to present a list of specific investment priorities on energy and on the regional transport core network. The list would comprise mature projects already included in the framework of the Western Balkans Investment Framework and which would make a clear contribution to the connectivity agenda.

Of course these projects will need financing. As a first step up to 130 million euro in IPA II funds will be available from the 2015 multi-country programme as grant investment co-financing to move these projectsforward together with loan-financing from European Financial Institutions.

Strong commitment to improving connectivity in the region

I say a first step because I am strongly committed to improving the connectivity within this region and between the region and the European Union. We are ready to commit as much as 1 billion euro from IPA II to this end.

This is a substantial effort and with the appropriate loan-financing leverage it could bring about significant connectivity improvements to the region, boosting overall competitiveness, leading to growth, job creation and a real improvement in the lives of all who live here.

This is my commitment but we must work together and I know that you are committed too.

Your commitment means focusing on the core investment priorities (core network) and establishing a credible planning and funding mechanism in the form of single sector pipelines.

It also means ensuring that you have the fiscal space to take up the necessary loan financing to get all the projects implemented on time.

And I will work with you on implementing EU-compatible reforms in order to ensure the best regulatory environment to implement and operate these projects.

From this it is clear that the connectivity agenda is closely linked to economic governance and notably the Economic Reform Programmes your Governments submitted to us earlier this year.

I count on you to pursue with vigour all the structural measures included in these reform programmes. You will get the maximum support possible from us in order to achieve this.

I have tried to highlight the challenges linked to connectivity that lie ahead for the region as I see them, and to offer my commitment and the support of the European Commission to  help you tackle them.

I would be very grateful for your views on these challenges and for suggestions on ways we can better help you address them. And I would urge you to look at this constructively and make it a reality.