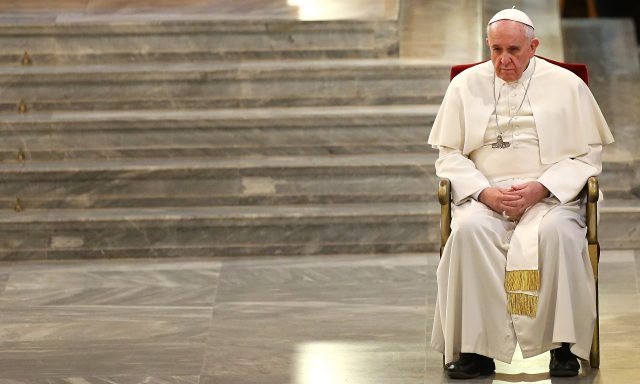 Is Pope Francis aware that he will be welcomed to Sarajevo by the same people who welcome and glorify war criminals?
Read a letter to Pope from Bosnia and Herzegovina.

We are deeply encouraged by Your forthcoming visit to our country. The announcement indicated that You were coming to foster seeds of good and contribute to the consolidation of fraternity and peace, so we took the liberty of addressing You. As residents of Bosnia and Herzegovina, we would like to share with You what You might not hear from politicians and officials. We are most respectfully addressing Your Holiness to introduce several issues we find to be of burning importance for Bosnia and Herzegovina and its people.

Catholic News Agency accompanied the announcement of Your visit with the statement: “(His Holiness) will also be entering a nation marked with vast ethnic and religious diversity, which served as a key factor in the country’s recent war.” We find this sentence extremely troubling and not complying with the truth.

This vast ethnic and religious diversity is in fact something we are proud of and find to be a great advantage and fortune for our country and society. Our very cultural being is a tightly weaved fabric of different ethnicities and religions; we would not be living in accordance with our own identity if we didn’t have space for the other in it. Although it also encompasses conflicts, sufferings and forced migrations, our multiethnic and multi-confessional identity is truly our natural state. And not only for us – Bosnia and Herzegovina is part of Europe where Muslims, Christians (Catholic and Orthodox), Jews and many other have been living together for centuries. Our tragedy is that this diversity has been used throughout the history as a pretext, or smokescreen, to steal the land and rob the people, following the maxim of “divide et impera”. It has been abused by those who grab power and serve particular interests and ruthless conquerors, by local political, and sometimes clerical, elites.

The early post-socialist period in Bosnia and Herzegovina has been characterized by two powerful and related processes: a “nationalization of the sacral” and a “socialization of the national.” At the same time religion was revitalized, as it came to be understood as a political fact – religion was politicized through ethnicization. As this occurred, the “understanding” of religion has, unfortunately, narrowed: religion has been oriented and reduced to ethnicity, rather than to its immanent universal characteristics, features and mission, thus, ethnic and religious identities collapsed into each other.

A sustainable and just political solution cannot be based on artificial division of our people, established and enforced by those who don’t mean them well. We wish to build on the strong foundations of our common cultural code, ethics and morality. We need to educate people, promote peace and reconciliation, and work relentlessly on justice and reconstruction of the tragically torn social fabric. We feel greatly empowered by Your Holiness offering help.

Bosnia and Herzegovina needs all the help it can get in the tortuously slow process of rebuilding trust among the country’s ethnic groups. A genuine reckoning with atrocities committed during the war is a key element in this process. Such reckoning depends on ending the denial and justification of crimes committed by members of “our” side; on acknowledgement and sincere condemnation of those crimes; on legal and moral accountability. In contrast, we are still witnessing glorification of individuals who, although found guilty and convicted of war crime, are lauded as national heroes and martyrs. In order for BiH to become “normal” we need to perform thorough removal of such nationalist spectacles from the public arena. We need to eliminate fascist notions from politics, education, media, and the street. That is the least our country deserves, having such a great number of people killed, wounded, raped, imprisoned in concentration camps, and expelled on base of ethnicity.

Allow us to illustrate why we see it as fascist logic and behavior with an unfortunate recent example. Below (Photo 1), it can be seen how Dragan Čović, member of the Presidency of Bosnia and Herzegovina, who will be Your host during Your visit to Sarajevo, and Marinko Čavara, current President of the Federation of Bosnia and Herzegovina, publicly welcomed the convicted war criminal Dario Kordić1, who returned from international prison after serving two thirds of his 25 years sentence. Great public celebration on this picture was followed by a Holy Mass and a speech Kordić gave from the altar (Photo 2). There wasn’t a single word of remorse, there was no catharsis nor the so much needed metanoia.

People like Kordić may not understand such concepts, but members of clergy who welcomed him and celebrated his return from prison, especially on his visits to Zagreb (where Kordić was greeted by Bishop Vlado Košić of Sisak) and Mostar, surely must. Instead, they chose to absolve perpetrators, turning them into martyrs. The provincial of Herzegovinian Franciscan Province, Dr. Fr. Miljenko Šteko provided institutional support to Kordic and even the space to lecture about his “experience of faith.” People of other ethnicities perceive this as a form of denial of their suffering and celebration of the crimes committed against them. Their wounds don’t heal, they deepen.

This was by no means the lone example of clergy endorsing war criminals, only the most recent one. Nor is this a phenomenon exclusive to the Catholic Church in Bosnia and Herzegovina. Their counterparts in the Serbian Orthodox Church or Islamic Community have also made public expressions of support for those convicted of or indicted for war crimes and crimes against humanity. Too many members of the clergy across the board do not serve their people, but their nation.

It makes us very sad that the same people who joyfully welcome war criminals are among those who will greet and welcome You in Bosnia and Herzegovina.

In last thousand years Catholic Church in Bosnia and Herzegovina has been an essential part of what our identity is. The contributions of the Church, its clergy and faithful in our spiritual, cultural, scientific progress is immense.

We are full of gratitude for all the help the Church and its people provided throughout the war. Many were nothing less than heroic. We will always remember Gabrielle Moreno Locatelli, a pacifist and student from Lombardia, member of „Beati i Costruttori di Pace“, who lost his life in Sarajevo during the siege. The people of this country are eternally grateful for the support they received from Pope John Paul II who, during the war, continuously spoke about Bosnia and Herzegovina and raised his voice against nationalism. This is why it is crucial how this generation of clergy answers to the calls for true peace and reconciliation.

Most Holy Father, Your every word and gesture will deeply resonate in our society and the world. We look forward to greeting and honoring You in our country. We feel blessed that Your Holiness chose to visit Sarajevo. We firmly believe that Your visit can mark the beginning of the era of genuine peace and reconciliation, which would benefit generations of Bosnians and Herzegovinians.

With deep respect and every good wish to Your Holiness,

Rukiqi: The abolition of 100 percent taxes must be based on...