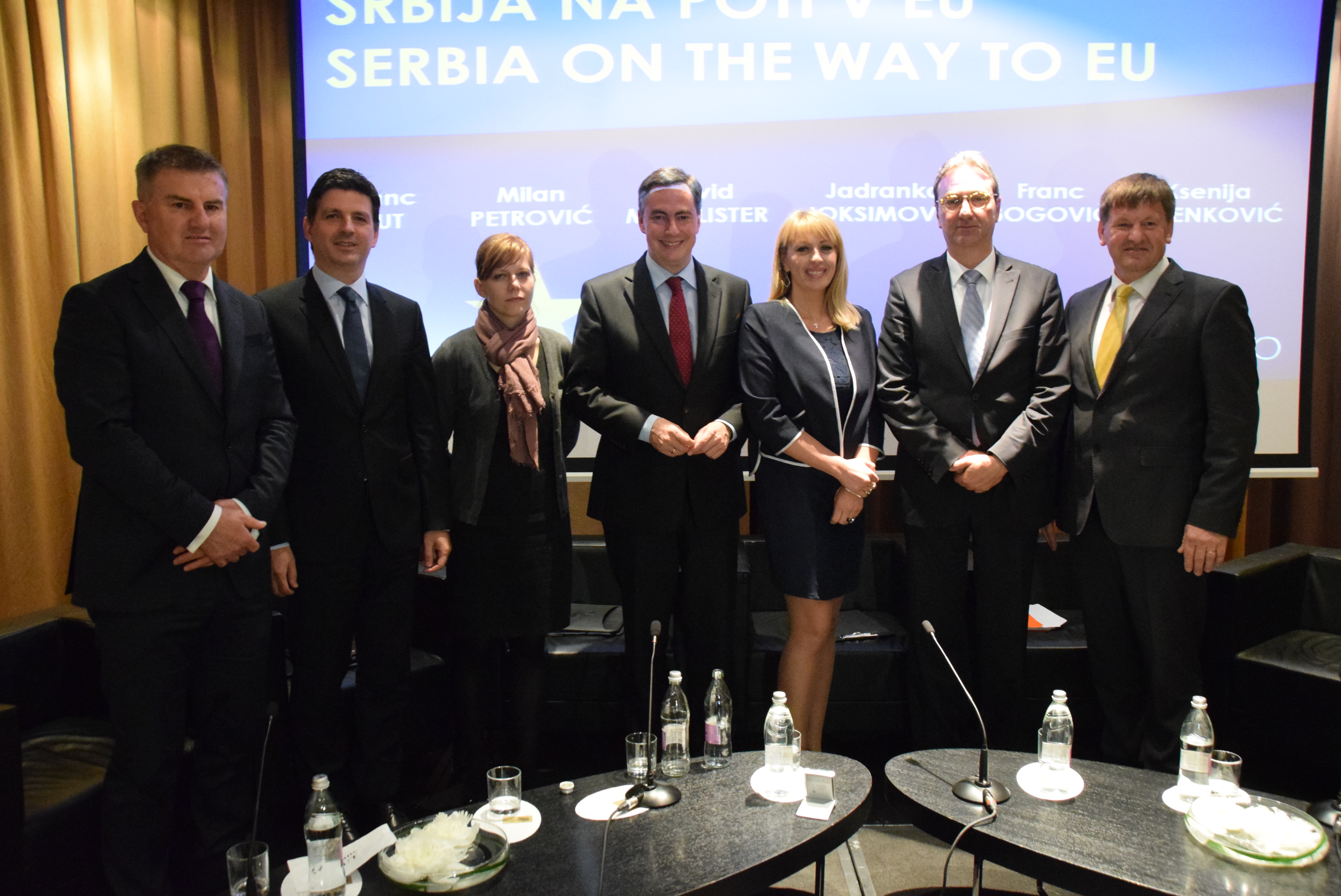 LJUBLJANA, 22.05.2015. – MEP Franc Bogovič hosted a roundtable »Serbia on the way to EU« yesterday evening. The distinguished speakers debated on Serbia’s accession process to the European Union, their motivation and the implementation of reforms, about the question of the enlargement of the EU, the positive and negative aspects of the accession process and of becoming a member state. A lively debate was followed by another one, this time moderated by topical questions from the audience. The speakers agreed on this: Serbia has some obstacles to tackle in the future, but the most important thing is to keep improving, open negotiations and keep investing  resources into improving the state of affairs in Serbia, to help the society, in particular to give the young people a chance to invest in their future in Serbia.

Video of the roundtable discussion can be found here.

Member of the European Parliament (SLS/EPP) Franc Bogovič stated in his opening remarks after greeting his guests that it is a pleasure and an honour to host such an event, because Serbia belongs to the EU and their accession is a process for peace in Europe. The EU was founded after the WWII and it now hosts a population of over 500 million persons. »There is an area of Western Balkans with a little less than 20 million people and I am sure that it is time that this process continues. I am sure that Serbia decided on the right way,« said Bogovič and expressed hope that the roundtable will be a small part of the mosaic of their journey. Implementation of reforms on the practical and local level is very important in his opinion – it will change society. There is a lot of legislation to be passed and work to be done, especially with the people, who are vital to the process. He believes that the situation in Serbia is similar to the situation in Slovenia upon accession. As a former Mayor of Krško Bogovič emphasised the importance of implementing measures because of the will of the people as opposed to a dictate from Brussels: »When people see that you can build environmental infrastructure, roads, village and city infrastructure, those are practical results that people understand.« It is beneficial for a country to become an EU member state, but the motivation must not be the preaccession funds, othervise, another »Greece« can happen. While it can be profitable – the figures for Slovenia show that with IPA between 2003 and 2006, the full amount in the 2007–2013 financial perspective, the structural and cohesion funds – »all in all, we got six times more funds since joining in 2007 than before«. Bogovič believes that Serbia should get more funds from the EU to invest in environmental infrastructure etc. to make the integration process faster and for the people to actually feel what the EU is. »Never forget about the countryside or about the people,« he concluded.

Member of the European Parliament (CDU/EPP) and rapporteur for Serbia for the European Parliament David McAllister said he believes all six accessing countries have a clear European perspective, that is why the EU enlargement process will continue. It is also a driving force for important reforms: »Ever since the beginning of the European Union, enlargement has been a success and has brought stability and peace. The reforms are not only beneficial for those countries that want to join the EU but also for those who are already in the EU.« Some of the reserved current views on enlargement stem from the fact that the prospect countries may not be ready for some time, but it is to be expected they will become members in the 2014–2019 perspective, so the member states should help them. He stated that accession rules are quite simple: »A country can join the EU if it is within Europe, it shares our values and it fulfilles all the criteria. And the criteria must be fulfilled in practice. It helps neither if we turn away from problems. We have to adress the countries and tell them what they are doing right and what they still have to do. The EU is ready to assist, but the major steps have to be made by the candidate country. I think the Serbian train is definitely on track towards the EU.« He added that the Ukraine crisis has changed the EU’s stance on enlargement in a way that it is changing from »One size fits all«. McAllister also pointed out that Serbia has some obstacles to tackle in the future, and lots of thing to take care of, such as independence of judicial system, freedom of the media, privatisaton and improvement in public administration. In regard to the Belgrade–Priština relations, he said: »The EU cannot expect Serbia to recognise Kosovo, but their relations are expected to normalise continually.

Minister without portfolio in charge of European integration in the Government of the Republic of Serbia and national IPA coordinator Jadranka Joksimović expects Serbia to barely be able to adjust and implement all of the required reforms until 2018, and to become a member in 2020. Having friends such as Slovenia and Mr. McAllister, the rapporteur, certainly helps the process. She agreed that enlargement is one of the best and most successful EU politics. Serbia is very serious about accession and it wants to become a functional member of the EU. The reform of Serbian society and EU membership, which is bound to happen as a consequence of negotiations and reforms, is in her words »an added value. That is why we are Euro-realists. We want to be a successful state, a modern state.« Joksimović explained that it is actually difficult for a candidate state to use the pre-accession funds. If a country is able to do so, it is in her estimation actually very functional, because that requires a level of administration, finance management, single project pipe lines etc. She commented on Kosovo, saying that they opened a difficult political dialogue with Priština: »We are committed to this dialogue and are trying to find the best solutions. But I think our relations are not as strained as some other in the Western Balkans.«

Director of the Office of European integration of the Republic of Serbia Ksenija Milenković finds that the real motivation for accession constitutes of very basic elements: »Living standard, employment, social security, the issues, which I think are common to the people and the politicians in potential members and actual member states. This is what people really want to see – the improvement of their lives through the integration. More than 60 % of Serbian citizens support the economic reforms performed by the government. People do not take them for granted, they understand that they will make their lives better.« In her assessment one of the greatest fears in Serbia is »that we will lose our national and cultural identity by acceding the EU, that our language will be lost somehow, that our sovereignty will be lost and we will have to give it all up. I have to say, as legitimate as it is, this is the myth that we have to work on to really break it. But I would definitely not go against the genuine motivation.« Milenković emphasised that even though some of the motivation for accession may seem selfish, profit oriented, so do some of the reasons against enlargement.

Former Ambassador of the Republic of Slovenia to the Republic of Serbia Franc But spoke about the before mentioned fear of losing cultural identity, and Slovenian perception of it in the process of accession. Considering Slovenia’s success and its status as »an accession model« in the region, he reassured Serbia that »we have not lost our identity, we have not sold our land. We kept our traditions, our way of life. On the other hand, we gained the possibility to legally protect some of our traditional products, for instance. This is a business opportunity for a part of our society today. I believe that we can offer some of these experience to Serbia, to the region.« He described the scepticism he encountered while working as an accession negotiator for Slovenia, and how today some of those sceptics are among the biggest proponents of the enlargement. In his opinion, Serbia must pay attention to its stability and open chapters of negotiation as soon as possible.

President of the Serbian Association of Managers (SAM) Milan Petrović focussed on Serbian accession from the business point of view. He believes that joining the EU will be beneficial for Serbian business. His belief is supported by numbers, so economically there is no doubt that Serbia should integrate as soon as it can. But there is another motivation – facing the current social and economic problems, there is a great challenge in dealing with the young people. They would like to invest in their future, but in doing so they are also forced to make a decision between staying in Serbia or going abroad. They need jobs to improve the quality of their lives. Petrović believes that »a more transparent business environment is also necessary for the young people to not only manage, but thrive in Serbia«.

The Ambassador of the Republic of Serbia to the Republic of Slovenia Aleksandar Radovanović said in his greeting before the beginning of the discusion that he is glad the relations between Serbia and Slovenia are so close. This and the talks with Slovenian institutions is another thing giving them hope that Serbia and the region will with Slovenia’s help find their way to the EU.