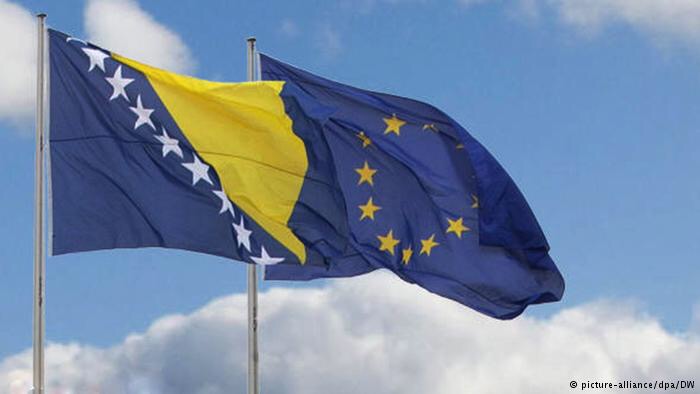 “Today’s full entry into force of the Stabilisation and Association Agreement is a milestone on Bosnia and Herzegovina’s EU path. New chapter begins. Political clarity, decisive action and a real, coordinated effort by institutions at all levels are now needed to develop and implement the reform agenda. Tangible results will be fundamental for the Council to consider a membership application in the future. An overwhelming majority of BiH citizens want their country to join the EU and the leadership of the country needs to redouble its engagement and meet citizens’ expectations,” said Federica Mogherini, High Representative for Foreign Affairs and Security Policy/Vice-President of the Commission.
“I welcome the entry into force of the SAA as a defining moment in the relations between the EU and Bosnia and Herzegovina as well as an agreement which firmly sets BiH on an EU-accession path. At the same time, the SAA also brings new responsibilities stemming from its implementation and for BiH authorities to deliver upon. The Commission will spare no effort assisting the country’s authorities in the implementation of the necessary reform agenda,” said Johannes Hahn, Commissioner for European Neighbourhood Policy and Enlargement Negotiations.
Background

The SAA will more specifically upgrade the EU-BiH relations through the establishment of a dedicated institutional framework: SAA Council, SAA Committee as well as sectoral Sub-Committees; a SAA Parliamentary Committee will also be established between the European Parliament and BiH Parliamentary Assembly. The entry into force of the SAA will also increase the confidence of investors, domestic and international in the country. It will allow both Bosnian companies and EU companies to access their respective markets. This is conducive to enhanced business opportunities for both the EU and the BiH based companies and would stimulate economic growth and employment.

Finally, the SAA will also contribute to the progressive alignment of BiH norms and legislation with the EU legislation, thus benefiting BiH citizens through better quality, healthier and safer goods. The trade part of the SAA entered already into force entered already into force on 1 July 2008 with the Interim Agreement. It still needs to be adapted to take into account the traditional trade with BiH before Croatia’s EU accession.

The first meeting of the Stabilisation and Association Council is expected to take place in the second half of 2015.

Text of SAA on website of Delegation of the European Union to Bosnia and Herzegovina: http://europa.ba/documents/delegacijaEU_2011121405063686eng.pdf

Norms over forms: Empowering civil society in the Western Balkans and Turkey

Declaration of the EU-WB Summit: Full support for acceleration of WB accession

Key findings of the 2021 European Commission Report on Montenegro