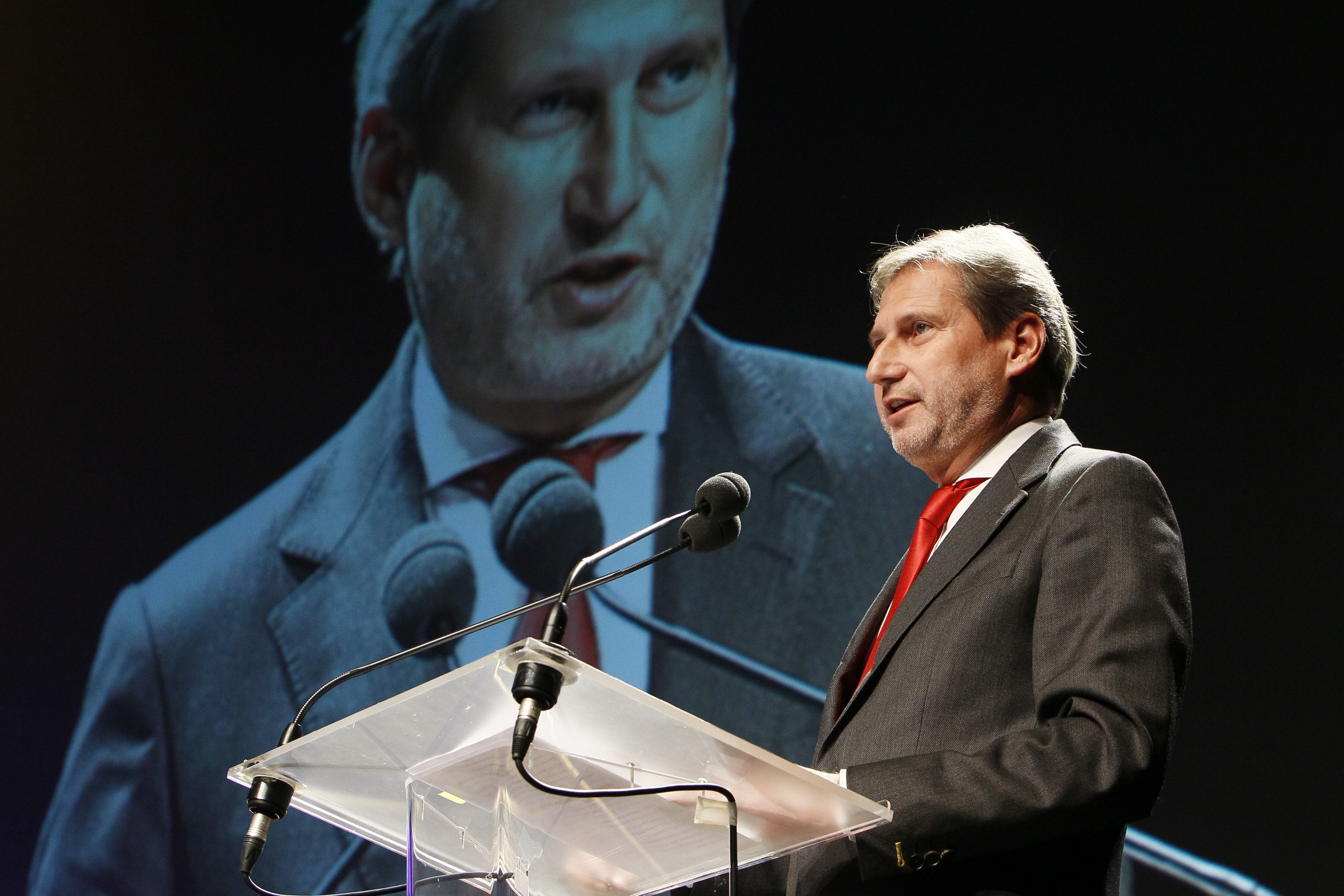 European Western Balkans had honor to spoke with Mr Johannes Hahn, European Commissioner for European Neighbourhood Policy and Enlargement Negotiations. Johannes Hahn (@JHahnEU) previously served as European Commissioner for Regional Policy in the second Barroso Commission. During this term Johannes Hahn implemented the most ambitious and comprehensive reform of EU Regional Policy so far. The main achievement of the reform is the transformation of Regional Policy from a subvention into a genuine investment policy, closely linked with EU economic governance and macro-economic conditions. Hahn is a member of the Österreichische Volkspartei (ÖVP) and the European People’s Party (EPP). Hahn studied at the University of Vienna, graduating with a doctorate in philosophy in 1987. In 1992 Hahn became Secretary of the ÖVP in Vienna and in 1996 he became a member of the City Council in Vienna. From 2003 to 2006 he was a city councillor without portfolio. Since 2004 to the time he became Commissioner Hahn has been Chairman of the ÖVP in Vienna. In October 2014 Johannes Hahn was appointed Commissioner for European Neighbourhood Policy and Enlargement Negotiations.

European Western Balkans: Mr. Hahn thank you for accepting our invitation for the interview. We will try to deal with several countries of the Western Balkans, so let’s start with the biggest one. In the past year, Serbia waited for the date of opening the first negotiation chapters. There were speculations that it would be September, December, February, July… every month there is a new date that can be heard from Nemanjina Street and there is no date from Schuman Square. What is your opinion about this step in European integration of Serbia? Politicians in Serbia are talking about upgrading of conditions set by EU member states. Would you mind telling us is that true?

Johannes Hahn: I always maintain that there is no “speed limit”. This is why I prefer to refer to a “process” rather than to “negotiations”. And the pace of this process lies in Serbia’s hands. The Serbian Government set itself ambitious target date, which I welcome as a sign of their strong dedication. As I mentioned in Serbia month ago, I would like the first chapters to be opened soon and I work with your authorities to reach this goal.

Conditions are clear and they are not a moving target. They have been set by all EU Member States unanimously and are included in the Negotiating Framework adopted in December 2013. In there, it is clearly stated that rule of law, as well as the objective of normalisation of relations between Serbia and Kosovo, should be tackled early in the negotiation process. A lot has been done in this respect, but we are not there yet. My services are currently assessing the latest versions of the Serbian action plans on rule of law chapters 23 and 24, and provided there is parallel progress on the outstanding issues related to the implementation of the agreements reached with Pristina, I am hopeful we could open first chapters this year.

EWB: In February this year you said that EU could not react to claims about violations of press freedom in Serbia without seeing concrete evidence. Now you had meetings with the editors of Serbian media. Do you have a clear picture about this now? Do you agree with the majority of experts and journalists who are telling that there will be no serious reaction from Brussels until the Belgrade-Pristina negotiation process ends and the Chapter 35 is closed?

JH: I have always been very clear on this. Media freedom is a non-negotiable fundamental right and a key condition for candidate countries that must be fulfilled ahead of membership.

The Commission has repeatedly raised concerns about the deteriorating conditions for the exercise of freedom of expression in Serbia and lack of transparency regarding media ownership. I have discussed these matters with the Serbian authorities on various occasions, in an open, respectful and constructive way, and will continue to do so. I believe that the message was understood and hope that concrete improvements will follow.

EWB: In Belgrade you also had a meeting with Serbian Ombudsman. You heard what the situation is. The UN High Commissioner for Human Rights raised concerns about problems in free work of the Serbian Ombudsman. Still, there is no reaction from Brussels. Why?

JH: I stressed EU’s full support for the Ombudsman’s important work and full respect of independent bodies when I was in Belgrade. Independent institutions and regulatory bodies, including the institution of the Ombudsman, have of course an essential part to play in ensuring the accountability of the executive in any functioning democracy.

It is important that all departments of the Government co-operate with the Ombudsman and other regulatory bodies. This is a significant element in implementing the Government’s Action Plan under Chapter 23 of the accession negotiations. This is a message that I passed to all my interlocutors in Belgrade and I am really pleased that since my visit, the Prime Minister met with the Ombudsman. I understand that they could be meeting on a regular basis from now on. I hope this will mark a new beginning in the relationship between the State and independent institutions.

EWB: What do you think about the political situation in Serbia after the meeting with the leaders of the opposition?

JH: I was pleased to meet opposition leaders in Serbia. They fulfil an important democratic role and I told them how critical this is and encouraged them to continue a constructive approach for the challenges that lie ahead. I also welcomed their commitment to Serbia’s EU path. Cross-party consensus is of course crucial for a successful transformation process, which must comprise the whole society.

EWB: After the decision on SAA with Bosnia and Herzegovina nobody has mentioned the condition of changing the Constitution (Sejdic-Finci case). Did Europe forget about its own criteria?

JH: No. EU Foreign Affairs Council Conclusions of December 2014, which set the new EU approach towards Bosnia and Herzegovina are very clear. They state that: “The Council agreed on a renewed EU approach towards Bosnia and Herzegovina on its EU accession path throughout which all conditions, including the implementation of the Sejdic-Finci ruling will have to be met.” In this respect, the Commission is also requested by the Council to pay particular attention to the implementation of the Sejdic-Finci ruling. Our criteria remain the same but what has changed is the sequencing of our conditionality, in order for BiH to finally start addressing, through an initial reform agenda, the outstanding socio-economic concerns the country is facing and the related measures its citizens expect, as demonstrated in the February 2014 protests.

EWB: At the end, we cannot close our eyes in front of the recent events in FYROM. Why there is no a sharp reaction on the political crisis in Macedonia from Brussels?

JH: We, the European Commission, and the EU Member States, have repeatedly expressed our deep concern about the political crisis in the former Yugoslav Republic of Macedonia. Among others, the Council of the EU adopted conclusions on 21 April that sent a strong message to the country’s political leaders.

The Council concluded that all sides must assume their respective responsibilities and take immediate measures towards a sustainable solution. It also concluded that all allegations should be investigated by the relevant authorities, including those allegations of potential wrongdoing being made public, with full regard for due process, the principle of independence and the presumption of innocence.

We have urged the government but also the opposition party to start resolving and to start cooperating. In this context, we noted the recent important announcement of resignations from Government and state institutions as concrete steps towards political accountability. We hope that this development will also contribute to restoring faith in state institutions.

We call on all sides to engage seriously and constructively in political dialogue to put an end to the protracted political crisis. I have just spent recently several hours discussing possible solutions with both parties in Strasbourg at the inter-party talks facilitated by members of the European Parliament.  Also, we expect the authorities and all political parties to make every effort to avoid any increase of political and inter-ethnic tensions.

EWB: Mr. Hahn thank you for your detailed answers and your time. We wish you success in your work in Commission and especially European integration of the Western Balkans countries.