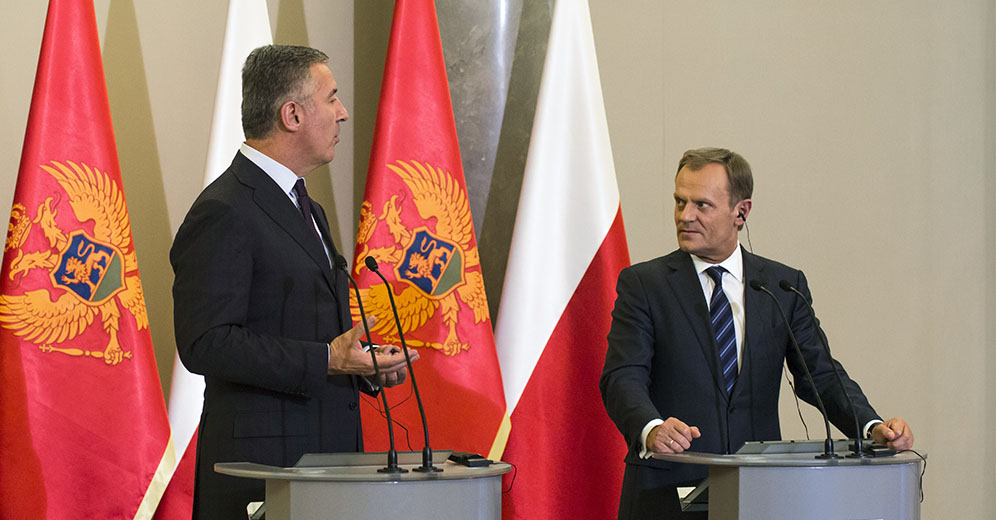 The recent visit by the Montenegrin Prime Minister Milo Đukanović to Brussels would most likely have passed as a regular foreign policy activity of a high state official had the Government of Montenegro not announced on its website that the president of European Commission (EC) Jean Claude Juncker “said that the EC was impressed with the progress Montenegro made in the process of European integration” and that “Montenegro has achieved impressive economic progress and stability of public finances”.

This alleged assessment of the president of EC provoked unprecedented reactions in the Montenegrin public, accustomed to the moderate praise and criticism from EU officials, usually due to the lack of progress on the rule of law.

The vice president of United Reform Action (URA) and independent MP Dritan Abazović pointed out that Juncker’s statement is absolutely incompatible with EC progress reports on Montenegro, and that even the Montenegrin Minister of Finance would deny that Montenegro achieved stability of public finances. Thus, Abazović said, “either Montenegro is utterly irrelevant to Europeans or Juncker met with the Montenegrin Prime Minister completely unprepared”.

Miodrag Lekić, leader of DEMOS, also responded to Juncker’s statement, asking the EU Delegation to Montenegro and its head Mitja Drobnič to explain whether the statement of the president of EC, as released by the Montenegrin Government, is authentic, saying he has doubts given the “confirmed tendency of the government’s propaganda stations” to “manipulate and twist facts”.

“EU Delegation in Podgorica has a duty to respond to this query, given the high level of interest in the Montenegrin public, and the nearly unbelievable, almost scandalous content of this message. Explanation is also needed because of the inconvenient fact that the said statement unexpectedly put a question mark over the credibility of EU institutions among our citizens, as well as over the seriousness of the integration process in which the Montenegrin citizens have so far very highly valued the role of the EU”, Lekić said.

Meanwhile, German ambassador to Montenegro Gudrun Steinacker said that Juncker’s statement on how impressed he was with Montenegro’s progress was primarily intended for the European public, in order to persuade it to continue with enlargement process.

The EU Delegation reacted to the calls by posting an announcement from Juncker’s office on its website, which shows that the Government failed to transmit Juncker’s words correctly, leaving out the part of the statement which says that “visible results, especially in the area of judiciary, will be of key importance for future progress”. Drobnič, who was placed in an unpleasant situation by these developments, told journalists that statements of high EC officials have to be read carefully because “they are sometimes very precise, thus one has to pay attention to all elements contained in those statements”.

“One should know the difference between negotiations and the process of European integration. At the end of the negotiations the countries sign the accession treaty, which stipulates the conditions under which the country joins the EU. At the end of the European integration process the country has fulfilled all the membership criteria and the next step is the accession to the EU”, Drobnič said. The Government had said Juncker was “impressed” with Montenegro’s progress in the EU integration process, whereas the announcement that came from his office said he “commended” the progress in negotiations. “Juncker’s statement was not aimed at the Government or the opposition, it was simply aimed at the state of Montenegro. Montenegro’s achievements are not only due to the efforts of the Government, but also to those of the parliament, which consists of both the government and the opposition”, Drobnič said.

President of the Managing board of Institute Alternative Stevo Muk told European pulse that the EU and EC officials, are continuing the usual practice of combining commendations and calls to action.

“The greater the problems facing other countries of the region in their preparation for EU membership, the more difficult their situation, the more the EU officials taut Montenegro as a good example and their statements are full of optimism about Montenegro’s progress. In this context, what happens in Montenegro matters the least for such assessments”, Muk said.

According to him, the Government of Montenegro and the ruling party always seek to disclose only those parts of conversations and statements by European officials that are positive about the government’s efforts and paint it in the best possible light. “Unfortunately in this they are often aided by the practice of European officials not to give official statements after such meeting and to leave out the more contested parts of the discussion from their diplomatically phrased communications”, Muk said.

In any case, says Muk said, following the reaction of the Montenegrin public to the Government’s recent announcement, president of EC ought to clarify his views and statements that were, unfortunately, published and interpreted by the Government of Montenegro instead of the EC.

“Statements made in relation to Montenegro or any other candidate country are obviously never heard only by the European public, but also by the public of the country the statement refers to. It is therefore important that the statements of European officials should always reflect both the progress and the challenges, as well as efforts of all parties: not just the government, but also the opposition, as well as the civil society”, Muk told.

Executive director of the Centre for Civic Education (CCE) Daliborka Uljarević believes that Juncker’s statement can be regarded as an encouragement for Montenegrin institutions to continue with their hard, demanding and uncertain work in order to achieve the necessary standards that will guarantee Montenegro’s success in negotiations with the EU.

“However, that does not give the government officials, and especially not the Prime Minister, the right to use the statement of the president of EC for propaganda purposes. That is not good for the negotiation process nor for the genuine attainment of tangible results, and finally and most importantly, the propagandist method is not in the public interest of Montenegro”, Uljarević told European pulse.

According to her, an objective and reasoned relation with the public, refusal to resort to propaganda and turning to precise problem analysis accompanied by recommended solutions and personal accountability for implementation would give us the hope that our decision makers have become more direct and that the quality and pace of reforms will increase. “Instead, on the official website of the Government of Montenegro we can only see empty satisfaction with what was already achieved, without reference to a single problem. Practicing power is not only exercise in persuasion, but concrete work on resolving accumulated problems with a clear attribution of responsibility”, Uljarević said.