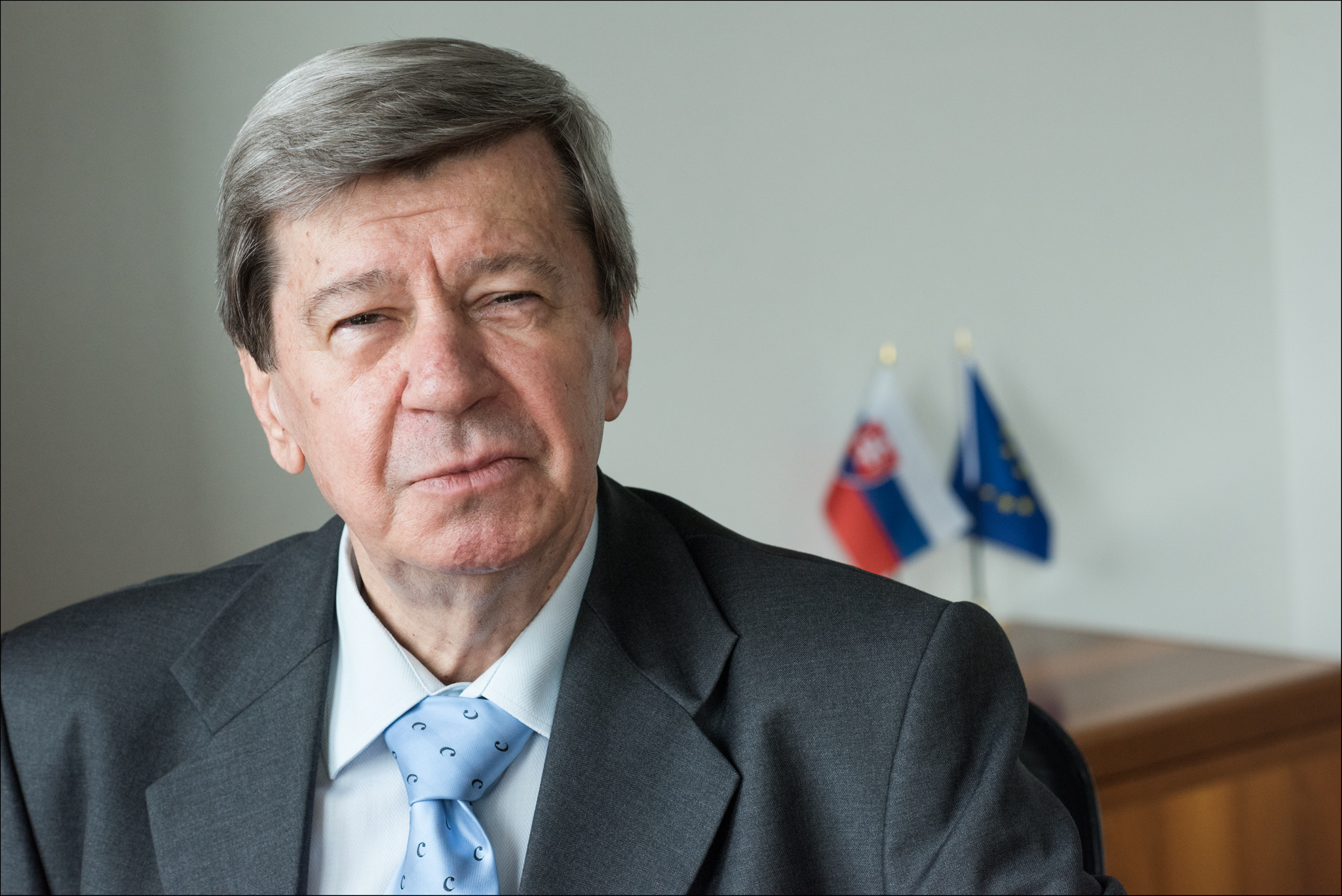 European Western Balkans had honor to spoke with Mr. Eduard Kukan, Slovak member of European Parliament. Eduard Kukan (@EduardKukan) served as Minister of Foreign Affairs of Slovakia from 1998 to 2006 and also a candidate in the presidential election held in 2004. Kukan graduated from The Moscow State Institute of International Relations in 1964. After graduation he received a Doctorate in Law from the Faculty of Law of the Charles University in Prague. He started his career in diplomacy in 1964 and served as Ambassador of Czechoslovakia in Addis Ababa and Permanent Representative of Czechoslovakia to the United Nations in New York. After dissolution of Czechoslovakia Kukan become  Permanent Representative of Slovakia to the UN, UN Chairman of the Committee for Social, Humanitarian, and Cultural Affairs but also Special Envoy for the Balkans, which he remain during all conflicts in the region from 1991 until 2001. He was elected member of European parliament in 2009 election and 2014 election. Eduadd Kukan is current Chairman of Delegation to the EU-Serbia Stabilisation and Association Parliamentary Committee.

European Western Balkans:  Mr. Kukan thank you for accepting our invitation for the interview. Let’s start with what most upset Serbian authorities these days – beginning negotiations of aqui chapters. When do you expect that the first negotiation chapter will be opened in the Serbian case? Which one it will be? What is the condition (or conditions) for opening it?

Eduard Kukan: The European Parliament has been very clear: we support the opening of the negotiation chapters as soon as possible. But Serbia has its own role to play in the process, mark progress in the reforms so that its performance can be assessed. It is up to the European Council, meaning the Member States, to decide on the exact date after evaluating this progress. We would like it to be as soon as possible, so that the country can continue in the reform process in that capacity. As far as which chapters these will be: the ones most prominently discussed, they will revolve around the most important issues linked to the rule of law and judiciary. It doesn’t matter as much on the order of the chapters, because Chapters 23 and 24 will most likely take the longest to close and will remain open during the negotiation process anyways. A lot of attention has been given to the advances in the Belgrade-Pristina dialogue, and the discussion revolves around substantial progress in these negotiations, linked to the opening of Chapter 35. This dialogue needs to move forward, married with strong political will and dedication to implementing the agreements reached.

EWB: During the adoption of the Resolution on progress report on Serbia, in March 2015, you were the Chairman of the Delegation to the EU-Serbia Stabilization and Association Parliamentary Committee, and you were a proponent of the biggest number of amendments. In one of the amendments you are proposing that Serbia should be encouraged that during its chairmanship of the OSCE it should contribute to the stabilization of the situation in Ukraine, and in that way, to show its dedication to human rights, rule of law, strengthening of the democratic institutions… In what way it is possible and necessary for Serbia to show its dedication to the democratic values in Ukraine?

EK: Serbia chairing the OSCE should be seen as an opportunity to help and contribute to stabilizing the situation in Ukraine, through the designed channels of this European organization. It is the role of the OSCE to find multilateral solutions to conflict and crisis situations in Europe. It is important to note that all countries that hold the key to a peaceful solution of the conflict in Ukraine are OSCE member states. That is precisely why I think Serbia’s chairmanship should be seen as a opportunity and an chance to launch the much-needed constructive dialogue, under the auspices of OSCE. Also, it is an opportunity in which Serbia can promote fundamental values and principles it shares with the EU, which it wants to become a part of.

EWB: Does the introduction of the sanctions towards Russia become an informal condition for Serbia?

EK: We have called on Serbia to align itself to EU’s foreign and security policy, and we encourage all our partners in the accession process to follow this line. It is only logical that countries, aspiring to become EU Members, are aligning its position with the rest of the bloc.  Although there is disappointment that Serbia did not do so, we respect its position and do not condition our relations upon it.

EWB:  How do you assess the state of human rights and democratic institutions in Serbia?

EK: Serbia has launched serious reform processes, which should be applauded. At the same time they had shown how much work still lies ahead.  For example, a functioning democratic system and subsequently respect for human rights need constant attention.

Separation of powers, and functioning independent state institutions are the key to democratic development of the country. Moreover, it is important to cultivate a favorable environment for an open and pluralistic society. Parliamentary opposition, the office of the Ombudsman, local governments, free media: all of these provide the necessary pluralistic environment and are key for checks and balances. Rights of minorities, all of them, need to be properly respected.

EWB: Whether, when you are talking about the relations of Serbia with its neighbors, you talk about Kosovo? What is expected from Serbia in the sense of the Brussels dialogue and its relations towards Kosovo at the moment, and what is expected in the future, before the opening of the first negotiation chapter?

EK: Serbia’s relations with Kosovo might have been in the spotlight, but we have to look also at the broader picture. Serbia is the biggest country in the region, and therefore its interactions with its neighbours are a key element to regional developments. In this respect, we have always called on Serbia to engage in a good and constructive manner with all of its neighbours. And these neighborly relations are key also for the integration process. Serbia needs to keep playing a constructive role in the region. Therefore, I was pleased to see Prime Minister Vucic on his reciprocal visit to Albania; this is the prime example of what good neighbours do.

As far as relations with Kosovo are concerned, I thing that they should reach a normal and cooperative level. I would expect that issues, which are still posing problems on a bilateral level will be solved in order to find an acceptable level of coexistence and cooperation for both.

EWB: Do you believe that the Western Balkans is stable? Did the EU menage to ensure the stability of the region (which was the first and the minimal objective 20 years ago when the conflict in ex-Yugoslavia was over?)

EK: I see the Western Balkans, contrary to the situation in the 1990s, as a more stable region, which has a clear EU perspective. That is a substantial difference when looking twenty years back. There are still many unresolved issues and problems hindering some countries to reach their full potential and I hope that there will be enough of courage and political leadership to overcome them.

EWB: What do you think about the behavior of your colleagues from Croatia towards Resolution on progress report on Serbia? After Šešelj Resolution, do you expect some similar behavior for possible Srebrenica Resolution (ALDE initiative)?

EK: My colleagues in the European Parliament played a constructive role when it comes to the EP Resolution on Serbia. I understand their points and encourage them to find a common solution. In my view, it is important to mitigate some bilateral issues from European Parliament’s resolutions and understand that this is a forum of members coming from 28 different countries. Therefore, we should lead a balanced discussion, especially on topics that might be sensitive in applicant countries. This applies not only to Serbia but also to the other countries of the region such as Macedonia, Bosnia and Herzegovina or Albania.

EWB: What will be the new approach of Brussels towards Bosnia and Herzegovina? (Will Croatian community ask for a new Dayton and will Dodik try to hold a referendum?)

EK: The “new initiative” is an important “carrot” for Bosnia and Herzegovina, and a chance for the country to move forward: politically, economically and in it’s relationship to the EU, which it wants to become a member of. I think that the socio-economic component of this initiative should motivate the decision makers to move on with necessary reform agenda. I hope that the Bosnian politicians will also see it as a chance to bring concrete benefits to their country and their citizens.

At the same time we should be expecting that competent authorities in Bosnia and Herzegovina move forward also on other vocal issues such as the implementation of the Sejdić-Finci ruling from 2009.

I would like to see both processes, the new initiative and the Sejdic-Finci ruling implementation, launched in a constructive manner, with political leaders assuming their domestic and international responsibilities.

Bosnia and Herzegovina needs to move on from the politics based on ethnical principles where politicians can play with this agenda for the sake of political gains to politics made for better development of the country and all its citizens. I am convinced that this is possible in Bosnia and Herzegovina.

EWB: Montenegro is the only country without open issues in the region. Is this really true? (These days Mr. Đukanović celebrates 25 years on power, some people complain about the lack of democracy and the media freedom.)

EK: I would correct this statement and say that Montenegro is the only country in the region, which is steadily negotiating EU accession, and with almost 20 chapters opened, a clear leader in this process. This also means that it has the responsibility to keep up the good work and assist other neighbours on their accession path. However, there are still issues that need to be addressed such as a track record of the rule of law, media freedom and freedom of expression, an improved parliamentary environment and making sure there are clear lines between the state and the ruling party. Montenegro should be credited with playing a very constructive regional role and fully aligning with EU’s foreign policy.

EWB: Mr. Kukan thank you for your detailed answers and your time. We wish you success in your work in European Parliament and especially European integration of the Western Balkans countries.

This interview was done in cooperation with NIN.