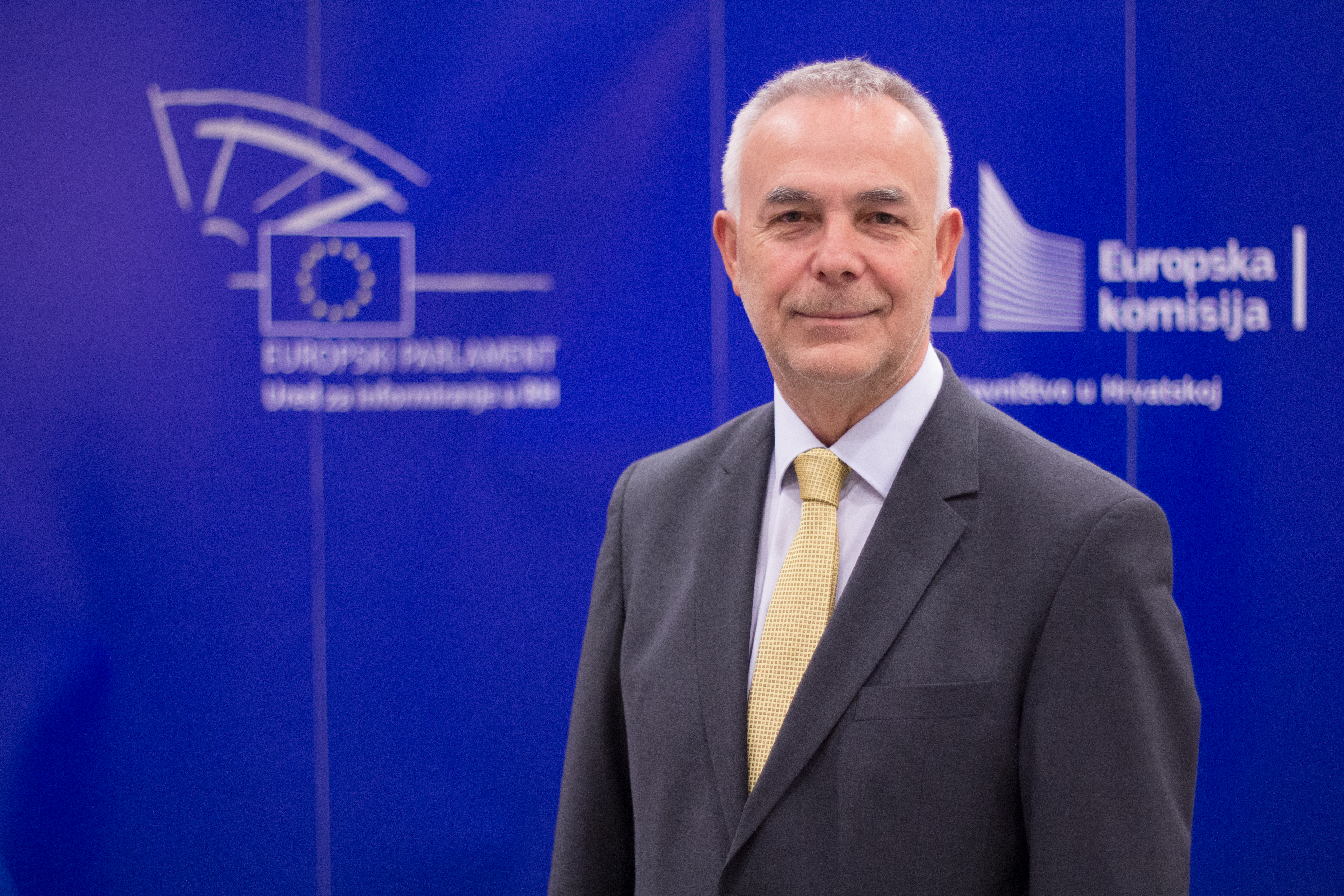 European Western Balkans has spoken with Mr Jozo Radoš, Croatian member of European Parliament in ALDE parliamentary group. Currently Mr Radoš is a member of Committee on Foreign Affairs and European Parliament Delegations for relations with Montenegro, Bosnia and Herzegovina and Kosovo, and also shadow rapporteur for ALDE for those respective countries.

European Western Balkans: Mr Radoš thank you very much for your time for this short interview. In the focus of your current parliamentary work in the European Parliament is the EU enlargement policy in the region of Western Balkans. I have few related questions:

Jozo Radoš: This is quite a new idea and a fairly revolutionary one. The EU is committed to continue with the enlargement process within a business as usual approach. The acceptance of the Western Balkan countries into the EU at the moment when they still aren’t fully fulfilling criteria requested can undermine also functioning of the EU itself. No matter how well-intentioned and perhaps even useful such idea it is, it is clear that it cannot be adopted. However the EU is seriously committed to EU perspective of the region. I am fully supporting this EU enthusiasm. For me integration is not only a bureaucratic activity, but also strategic decision for the EU which is currently facing a lot of problems and challenges, for instance, such as current Greek crisis. EU accession of the countries of the Western Balkans is not only their interest, but also an interest of the Union as a whole. We have some forces within the EU which are opposing the future enlargement, and having also this in mind it is not real to expect that EU will change its current accession criteria, particularly in the context of Western Balkans. The idea to accept countries in the EU under assumption they would easily reform within the Union than outside is not realistic. This is not likely to be accepted from the side of the EU and its Member States.

EWB: ALDE political group in the European Parliament is strongly supporting the EU enlargement of the Western Balkans. As a member of ALDE what do you think how you and your political group can contribute to facilitate and encourage the process?

JR: I am coming from Croatia and it is natural for me to focus on this specific policy area. Under current circumstances it is not likely to see any enlargement during this parliamentary term, even from technical point of view. Anyway, the EU should encourage Western Balkan countries to continuously do reforms and fulfil criteria. I think the new Commission shouldn’t send message that there won’t be any enlargement in this parliamentary term. This message is discouraging, but in the same time it reflects the mood in some EU Member States on this issue. Although it is not likely to have enlargement in this term, the European Parliament and the Commission are encouraging Western Balkan countries to progress on their EU path.

ALDE political group came up with the idea for the European Parliament and the EU to adopt so-called integral approach of the EU towards the Western Balkans as a whole. This new approach is based on the more enthusiasm and additional engagement of the EU, followed by measures and instruments which will facilitate and back up that process. There are two reasons for that. First is the fact that all those countries of Western Balkans are interconnected and have to cooperate. For instance, it is ethnically heterogenic region where members of one nation live in several other countries. Second reason is the fact that all those countries are facing same kind of problems. European Parliament’s resolutions on progress report of those countries in the accession process confirm that, as all of them are more-less very similar.

I welcome such approach in which all the set criteria, which have to be respected, should be uniform, without deviations from country to country. I strongly support committed EU engagement towards integrated and mutually interconnected region of Western Balkans.

EWB: Montenegro is today most advanced country in the region in terms of EU integration’s achievements. How you comment the fact that in past 25 years we have a single party in government. Is this suggesting some democratic deficits within Montenegro?

JR: Montenegro has changed its constitutional order for three times and under such specific circumstances this notion of democratic deficit maybe cannot apply to Montenegro. However, since its independence in 2006 there is a same party in power. This can be justified also by security and stability reasons for a young state with some internal difficulties to consolidate itself. From point of view of highest democratic standards this is problematic. Montenegro has a plural landscape of political parties, with very loud and active opposition, and even without change in power the country is perceived very much as democratic one.

JR: Formally Greece has possibility to block Macedonia in the EU accession; however it is incomprehensible that Greece does that in blackmailing manner. Losing of the EU perspective and frustration in the relations with Greece contribute to losing the interest on the EU. Internal disputes in the country between government and opposition together with semi-functional state and possible dissemination of inter-ethnical conflicts are hidden threat to the country. Blockade of the opening negotiations between the EU and Macedonia is not helpful to existing problems in the country. I hope that current crisis with Greece will be used to find a solution of this bilateral issue. The EU needs more effective techniques to stop some Member States to block an EU accession process of other country into the Union. Croatia was blocked by Slovenia in three occasions, on the basis of bilateral issues which were not connected to any EU accession criteria or EU values. I will not go into the legal nature of the dispute, but the result in the end is disastrous and overwhelming for the EU, Macedonia and partly for the entire Western Balkans. All Western Balkan countries are interconnected and progress of one country always pulls the other. From that point of view Greek blockade is very damaging.

JR: This initiative came from the European Council, but still needs to be clearly formulated. There are difficulties to change this declarative will and willingness for reforms into practical actions. EU accession should serve as a tool to speed up structural changes to achieve fully functional state. However, Bosnia and Herzegovina cannot become functional state without the change of constitution. Current model in fact makes central state dependent on the political relations within entities. Issue of constitutional changes in Bosnia and Herzegovina is extremely complicated so I don’t want to go into details, but reforms are certainly needed. Reforms that are taking into account also rights of the three constituent peoples. Bosnia and Herzegovina is a country of three constituent peoples and it cannot be constituent differently.

In the same time implementation of Sejdić-Finci ruling is impossible without constitutional changes. One cannot expect that implementation of this ruling will improve respect of human rights in the country. The EU is hiding behind its highest principles and values of protection of minorities when insist that Bosnia and Herzegovina should implement Sejdić -Finci ruling. This ruling is impossible to enforce without stronger political pressure on the political elites in the country. I would be happy to see Sejdić-Finci implemented, but in current circumstances I don’t see the point to insist on this issue from the side of the EU. This may be also contra productive, because this is not the most important of all problems that is Bosnia and Herzegovina facing right now.

EWB: Today European Parliament is commemorating 20th anniversary of Srebrenica tragedy. There were controversies with the possibility to have resolution on this topic in the European Parliament. How you see the fact that in the end it was decided to proceed without the?

EWB: Serbia is still waiting to open first negotiation chapters with EU. Dialogue on normalisation of relations between Belgrade and Pristina is one of the prerequisites and is not going smoothly. Where do you see the key point of dispute and how you estimate development of the situation in the future?

JR: It would not be logical to have two countries in the organization that don’t recognize themselves. As long as both don’t find mutually acceptable solution there won’t be improvements. Serbia will halt Kosovo, and vice versa. Dialogue process consists of many phases, of which lot of them are stagnation. It is important that stagnation phases are not too long so the two countries don’t lose the negotiation’s momentum with the EU. It is very important that normalization of relations stays an open process, which goes in the right direction. It is crucial to have both sides engaged together with the EU joint efforts. As an example, Kosovo is very much linked to Albania. Failure of the normalization process with Serbia can complicate the EU accession of Albania. Deadlock in the normalization of two countries potentially can do harm to entire region and slow down the EU accession process of Western Balkan countries. European Commission together with all responsible sides should work together to assist and encourage both sides to continue talks. Both sides should give up some positions and be ready for compromises in order to gain something in the end from this process.

EWB: Croatia and Serbia are two neighbouring countries, one in the EU, other willing to join. How you asses bilateral relations of two countries and which are main open issues between the two?

JR: Good cooperation between Croatia and Serbia is very important. But for the stability and prosperity of the region I see Bosnia and Herzegovina as a key country. It is a country in which both Croatia and Serbia are having possibility to influence. Two countries should develop good bilateral relations especially on the areas of protection of minorities, missing persons or judicial cooperation. These are some of the main pillars on which two countries should develop good bilateral relations. In my opinion Croatia should have fully affirmative approach towards Serbian EU accession perspective and support Serbia on its way to the EU. Of course, it is expected from Serbia to fulfil EU accession criteria, the same one that Croatia fulfilled when joining the EU. Good relations between Croatia and Serbia could encourage also forces in the Bosnia and Herzegovina to find a solution for problems this country is facing. The EU is also supporting such developments. A positive example in the form of good relations between Croatia and Serbia could be used as a model for the entire region of Western Balkans as well.