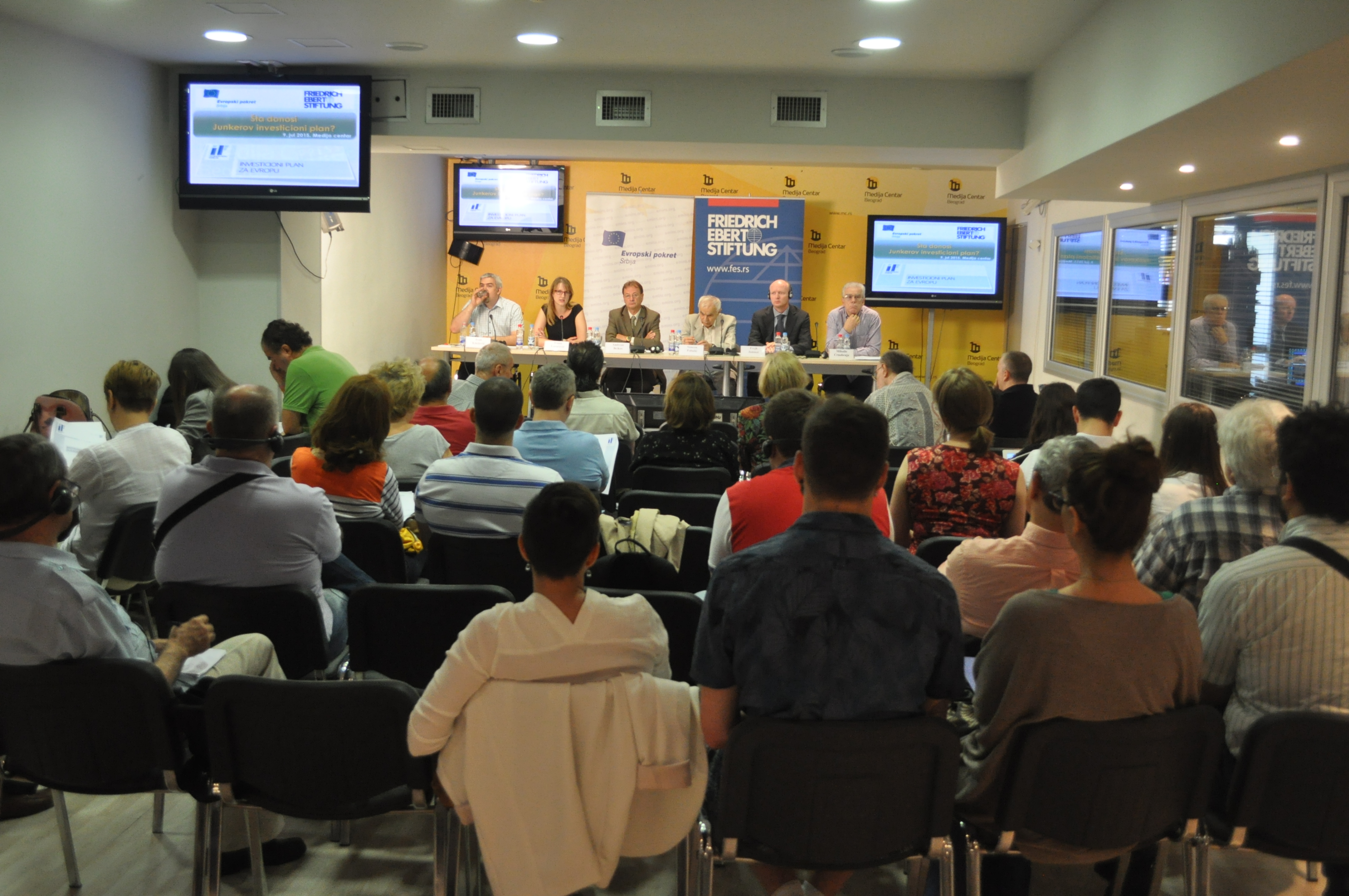 BELGRADE – The Investment plan for Europe represents a chance to significantly change economic outlook of Europe and its economic partners, is the overall message sent today from the event held in Belgrade. The debate on the Investment Plan for Europe or so-called Junker’s Plan was organized by European Movement in Serbia and German Friedrich Ebert Foundation.

Ivana Lazarević, representative of European Movement in Serbia, said that the importance of the Investment plan was constantly increasing especially having in mind the turbulence the European economy is facing as a result of the crisis in Greece. The role of the Investment plan will also be to give answers to the question what will follow upon reaching the final decision on Greece, how could the economy of Greece and the EU as a whole be improved. Setting up the European Fund for Strategic Investment (EFSI), which is at the core of the Investment plan, should help attract the focus of investors back to the strategic projects (infrastructure, education, energy, research and development, innovation, etc.) that are of significance for the competitiveness of the European economy.

Investment plan has the capacity to ensure 21 billion euros for investments throughout Europe. Head of Office of the European Investment Bank in Serbia, Andreas Beikos said that the EIB group would be in charge of conducting this Plan and helping the establishment of transparent project pipeline in order to ensure that the investments reach the real economy and create significant impact. He also said that there was an open possibility for Serbia and Western Balkan countries to apply for means in the European Fund for Strategic Investment with cross-border projects in line with the interests of the European Union.

Freek Janmaat, Head of the European Integration Section, Delegation of the EU to the Republic of Serbia agreed, however highly recommended the WB countries make use of already available, but still insufficiently used funds specially designed for them. It is easier for those countries to gain funds without having to compete with all 28 member states. Investment plan and its main pillars (EFSI, creating investor friendly environment and cutting red tape) could also serve to the EU acceding countries to align their economic governance in the best possible manner and prepare for the changes that the accession brings.

Significant level of investments this initiative would create, calls for serious reflections regarding spillover and social effects of the plan. Having in mind that the implementation of the plan is still in its initial phase the forecasts remain complicated to make, never the less, Simeon Pobulić from Forum for International Relations of European Movement in Serbia was cautiously optimistic. He expressed a concern regarding the total effects of the plan and the multiplication of 15 used for the means placed in the EFSI. He said the plan should be used as a long-term initiative to strengthen the European economy, but also to help fight poverty, social exclusion, level of unemployment, and income differences. Junker’s plan will not be sufficient if left alone.

Professor Mihailo Crnobrnja, Director of the Center for European Integration and Public Administration at the Faculty of Economics, Finance and Administration expressed his doubts regarding the real impact of the Investment plan. He made a comparison with the Pact for Stability and Growth that was once seen as extremely beneficial and important, yet disobeyed by many of the EU member states. Strict devotion and timely evaluation is needed in order to keep this Plan and its potential benefits alive and realistic. Impacts of the plan to the countries such as Serbia will be positive if the country seizes the opportunities the plan introduces.

The event was conducted in the scope of the new initiative of the European Movement in Serbia entitled ‘’European Affairs’’. The goal of the initiative is to keep a steady track record of the current state of art in the European Union, give proposals on how Serbia should use the ongoing changes in the EU, and provide meaningful information on the European affairs to the wider public in Serbia and the region.