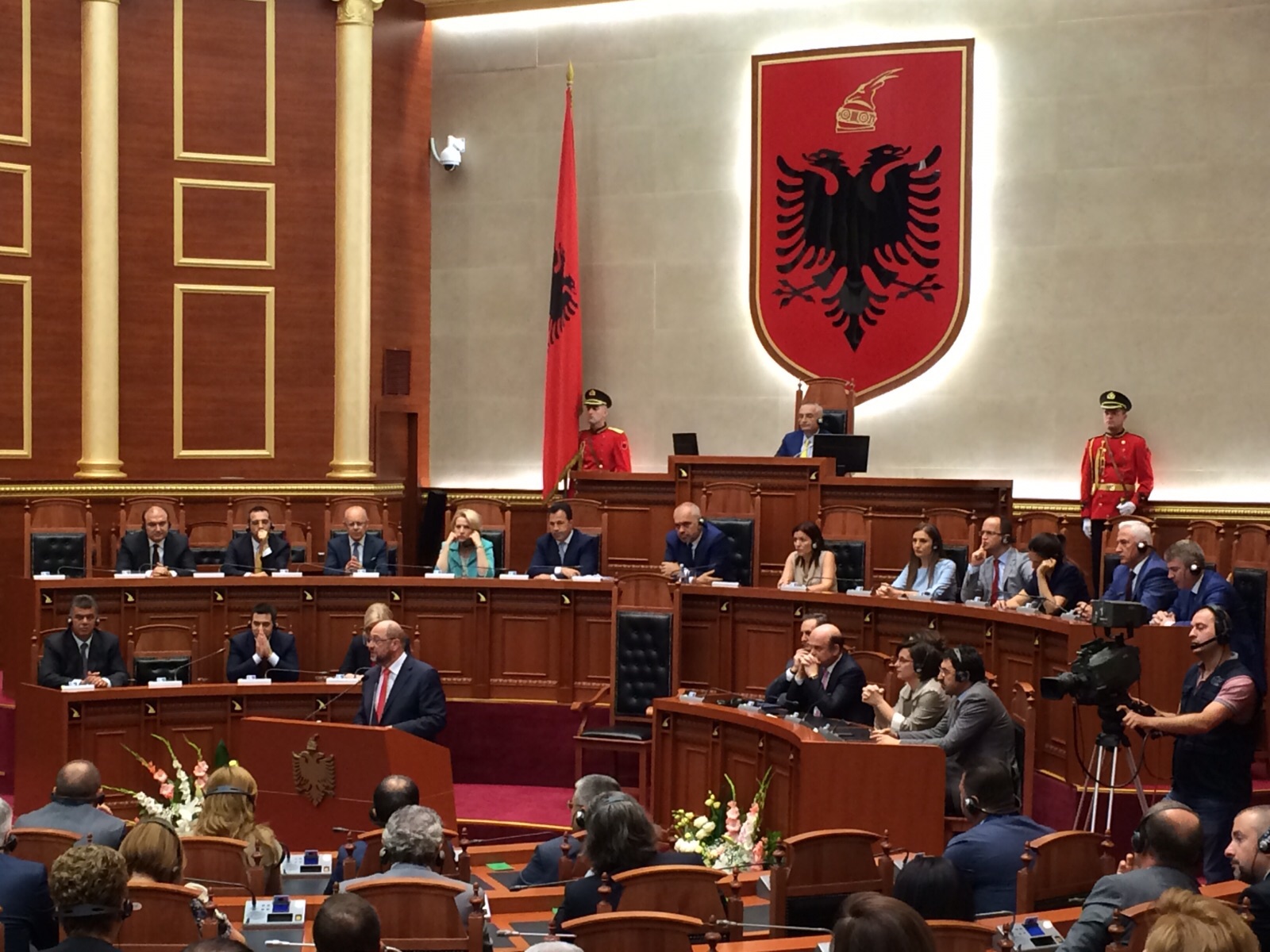 It is a great pleasure and honour for me to be here to speak to you in Kuvendi.

In the past year, many commemorations have been held in Europe. These ceremonies and pauses for recollection are important. They give us a rare opportunity to stop what we are doing and think about where we have come from, how much past events still determine what is happening now, and how closely our history as Europeans and thus also our futures are interwoven.

A century ago, the First World War was triggered by the assassination in Sarajevo – not far from here. During the First World War – the first war to be waged industrially – we saw the worst side of the modern age. Millions of young men who believed in loyalty, chivalry and honour on the field of battle were flung into situations where they had to face the merciless military technology of the 20th century, and died miserably in industrialised mass slaughter. Millions of people suffered under occupation and the consequences of war. Your country too, which had only recently achieved independence, was occupied.

The First World War, that first great catastrophe of the 20th century, left in its wake a devastated, destroyed continent; powers collaborated, borders were redrawn, and the seeds were sown for fresh rancour, fresh hatred. Millions of dead and a generation deeply scarred by the war were its legacy. And the destruction yet to follow proved to be greater still. Fascism. The Second World War, which Nazi Germany unleashed with its invasion of Poland three quarters of a century ago, and which enveloped Europe like a wall of fire. Again, Albania was occupied. The massacre by the German Army in Borova, 72 years ago, on 6 July 1943, in which German soldiers barbarically took reprisals for attacks by partisans and cruelly murdered women and children, will for ever fill us with shame. We shall not forget it.

Just as we shall never forget the courage and humanity of those Albanians who saved their Jewish neighbours from deportation. Thousands of Jewish refugees also found shelter and protection in your country. To a people who act on the principle that it is simply right to take in a stranger who needs your help, even at the risk of your own life – a principle which you call ‘besa’ – to such a people I can only express my deepest respect.

In 1944 your country was then liberated from occupation, but freedom did not come. The Iron Curtain arbitrarily divided Europe into East and West. My country too was torn in half; families were brutally separated.

Whereas in the West something happened for which there was no historical precedent – the victors did not overwhelm Germany, which had been responsible for the war, but extended to their archenemy the hand of reconciliation and set up a community of peace and democracy, progress and solidarity – meanwhile the East was for many decades to be denied self-determination and freedom.

For half a century, the Albanian people had to suffer under the worst of tyrannies, brutally shut off from the world, arbitrarily separated from their European family.

That remained so until a quarter of a century ago, when a year of miracles came, when the spark of freedom set Europe alight. In Poland, Solidarność was victorious. In Hungary, people won self-determination through their own efforts. From Vilnius to Riga and Tallinn, people stood hand in hand and gained their independence through a singing revolution. In Berlin, people pulled the wall down, shouting ‘We are the people’. And in Tirana too, first students and then more and more other citizens came out into the streets demanding freedom.

Today we see it as virtually inevitable that this European freedom movement would succeed, and that the Iron Curtain had to fall. However, that was by no means guaranteed. It really was not a foregone conclusion that banners, candles and flowers, songs and prayers would triumph over tanks and guns, walls and borders. How easily the demonstrations could have ended in tragic bloodshed!

We ought to remember that fact today, so as to understand what enormous courage those people displayed, what fears they experienced and overcame because they wanted to live in a free and just society, how much gratitude we owe to those freedom fighters, and what a responsibility we bear as a result.

Ladies and gentlemen, It is important to keep the memory of our history alive, recalling the bad events as well as the happy ones. Because there can be no reconciliation without memory. Reconciliation is only possible if the pain and suffering that people have experienced are acknowledged, if we remember how poisonous rhetoric and populist agitation pave the way for cruel deeds. I see this European history of ours as imposing on us the obligation, every day, to resist the resurrection of old demons, to resolve conflicts constructively at the negotiating table, to fight every day for freedom and democracy, peace and mutual understanding.

The recent rapprochement between your country and Serbia is a manifestation of this European spirit. By means of his visit to Serbia in November, Prime Minister Rama took a vital step towards better understanding throughout the region, and it was followed by the visit to Tirana by Prime Minister Vucic a few weeks ago, in May. I congratulate Prime Minister Rama on this initiative.

Colleagues, differences of opinion may sometimes arise between neighbours. Differences of opinion, conflicts of interest are a fact of life. What matters is how one resolves them. We in Europe have decided to resolve them through dialogue and consensus. We Europeans engage in discussion until we find a solution. That is often a laborious business; it may not be easy on the nerves – a fact which I can honestly confirm, having come from the weekend summit in Brussels. But, if we consider the alternative, which would mean the stronger party simply imposing his will on the weaker, or resolving conflicts of interest through violence, then we should be happy to engage in difficult negotiations.

The latest rapprochement between Serbia and Albania likewise shows that, despite differences of opinion, it is possible to for visits to take place in a friendly atmosphere. Indeed, they have even intensified their contacts.

The fact that Albania and Serbia now wish to make their cooperation the driving force behind wider cooperation in the region is a really encouraging sign. The Western Balkan Six are paving the way for a good future for the region. The agreement on transport networks is a milestone. I hope that you will soon begin to implement it, because such a transport network will accelerate the process of integration in the region – in economic, political and human terms. I myself grew up in a border region, on the border between Germany, Belgium and Holland, and learned that the best thing to do with borders is to open them in order to make them less of an issue and resolve minority problems.

So your commitment to regional cooperation is exemplary – keep up the good work!

Do not let anyone divide us and play us off against one another! We must stand shoulder to shoulder, work together to free ourselves from dependences and for example also cooperate more closely in the field of energy supply and energy security. Albania and the EU are 100% in agreement on external policy. Let us continue to pull together!

In March, another High Level Dialogue on the key priorities for Albania’s process of integration into the EU – already the fifth of its kind – was held under the co-chairmanship of Prime Minister Edi Rama and Commissioner Hahn.

On that occasion, Commissioner Hahn expressed his concern about the increasingly confrontational political climate; about the fact that the persistent tensions were damaging your country and constituted a risk to the whole reform process. I share his concern. I call on you, therefore, to act in accordance with the 13 conclusions of the dialogue, particularly as regards reforms of the justice system, strengthening an independent, accountable and efficient judicial system and building up an efficient system of public administration. Independent institutions are the key to a fair and prosperous future. And initial successes in efforts to combat corruption should encourage the government to pursue them further in an energetic manner.

Ladies and gentlemen, A century after the outbreak of the First World War and three quarters of a century after the beginning of the Second World War, 28 States have now committed themselves to overcoming the challenges that they face together. Because we share common values and are stronger together. A quarter of a century after the fall of the Iron Curtain, Eastern and Central European States have also at long last become members of the EU. They have implemented impressive reforms, completely revamping economic systems and models of society. That required people to make great sacrifices, which is not easy. But the EU keeps its promise to those who courageously undertake reforms.

The European Parliament supports those who choose the path of democracy and the rule of law, who see reconciliation as the key to security and cooperation in the Western Balkans. We stand side by side, in a spirit of solidarity, with everybody in Albania who wishes to build a peaceful, common future, work to bring about reforms and reach out to his or her neighbour the hand of reconciliation in order to live together in mutual respect and peace.