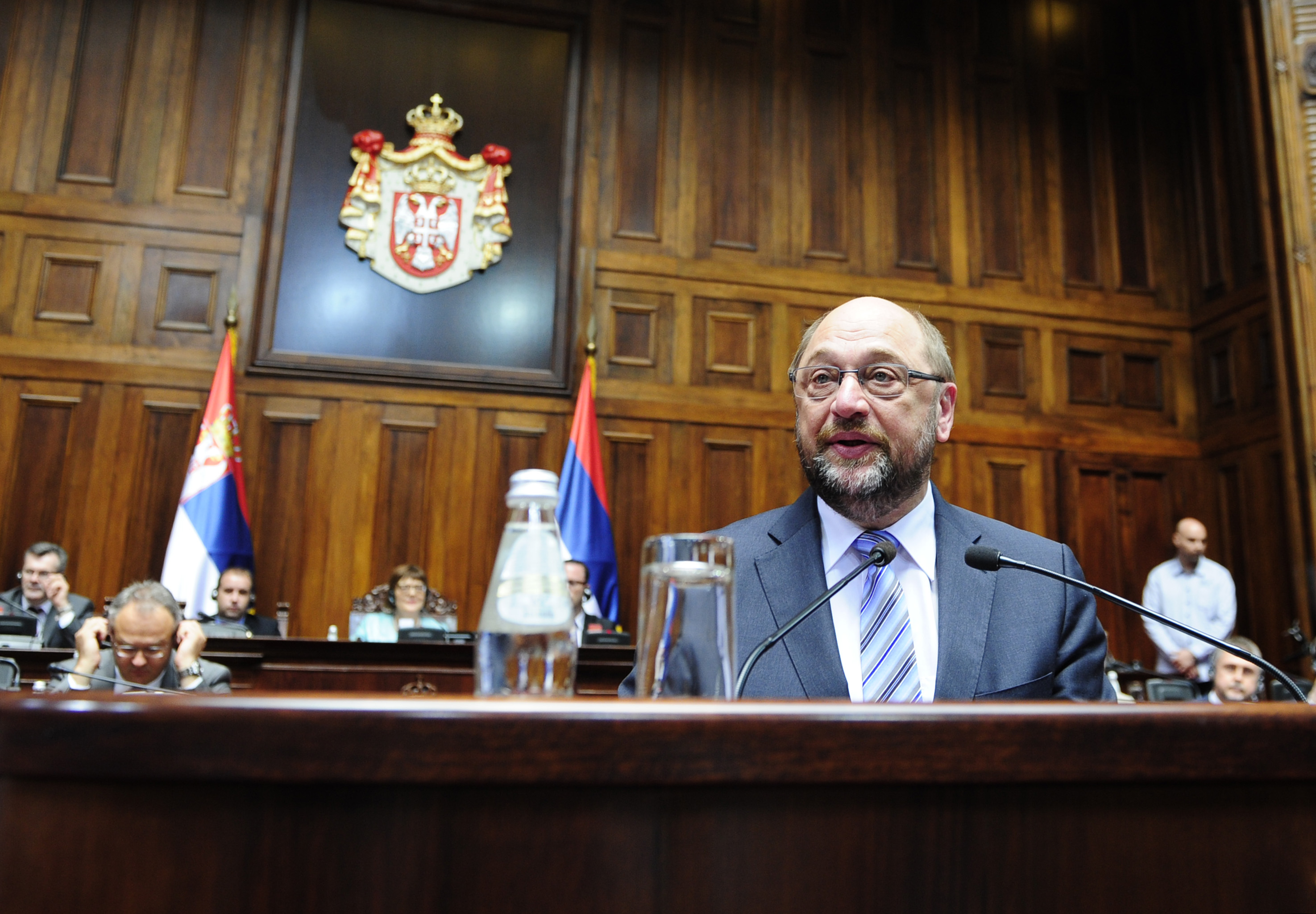 Members of the Serbian Parliament, colleagues,

I am both delighted and honoured to have been given the opportunity to address the Serbian Parliament today. Thank you for your invitation and for your warm welcome.

We in Europe have a year of commemorations behind us. Together we commemorated the outbreak of the First World War one hundred years ago. The First World War, the defining catastrophe of the 20th century, left in its wake a devastated, destroyed continent. And the destruction which was yet to follow proved to be even greater still: the Second World War, which Nazi Germany unleashed with its invasion of Poland three-quarters of a century ago and which then enveloped Europe. The German Luftwaffe’s bombing of Belgrade on 6 April 1941 alone claimed 20 000 civilian lives. Germany brought terrible suffering to the peoples of Europe. Through the Holocaust, the nadir of human history, Germany heaped a terrible responsibility on to its own shoulders. For that reason, it was important that this year we should also commemorate the liberation of the concentration camps and the victory over National Socialism.

As the German President of a multinational parliament, and even after many years in European Union politics, commemorations such as the ones I referred to above still leave me moved and humbled by the fact that, after the Second World War had ended, the victors chose not to humiliate Germany. Instead they held out the hand of reconciliation to their arch enemy and made it possible for the German people to return to the international community with their heads held high. What courage, what clear-sightedness the founding generation of the European Community showed!

Let us not forget that the course of action they were proposing, so soon after the war, as houses still lay in ruins and wounds had not yet healed, was anything but popular. Their decision not to exact revenge, but instead to seek reconciliation through de facto solidarity, inoculated the Member States against the threat of war. They endowed the European Community with institutions in which conflicts of interest between larger and smaller countries, between richer and poorer countries, are resolved by means of dialogue and consensus. They established a community of peace and democracy, of progress and solidarity. They encouraged friendships between people who only a few years previously had been shooting at one another. Today, my children take it for granted that they can live and work anywhere in a Europe without borders. What an achievement to set against Europe’s bloody history!

For that reason, I should like to express my admiration for Prime Minister Vučić’s decision to attend the commemoration held in Srebrenica on 11 July. Twenty years ago in Srebrenica 8000 men and boys were systematically murdered over a period of a few days. In Srebrenica, in the heart of Europe, and before the eyes of the world, the worst war crime since the end of the Second World War was perpetrated. The fact that it was allowed to happen constitutes a collective failing on the part of the international community, one of which we should all be deeply ashamed.

Prime Minister Vučić, I was dismayed to learn that when you attended that commemoration you were forced to flee from an angry crowd. This regrettable incident should prompt us all to make even greater efforts to come to terms with the past and achieve genuine reconciliation. Doing everything we can to ensure that violence of this kind can never be repeated is perhaps the best way of honouring the memory of all those who have been killed, raped, tortured or displaced in the course of Europe’s catastrophic wars.

I should like to thank you, Prime Minister Vučić, in particular for your initiatives and for your commitment to making this region more stable. The first initiative that comes to mind is the decision to hold talks with Kosovo. I know that these talks are not easy. Differences of opinion and conflicts of interest between neighbours are part of everyday life; the most important thing, however, is to deal with them in the right way. You have stepped up the talks with Pristina, and that is welcome. I hope that you will soon be able to achieve a breakthrough. At all events, Serbia’s willingness to compromise on these difficult issues has not gone unnoticed in Brussels.

The huge improvement in relations between Serbia and Albania is good news for the entire region. Prime Minister Rama and Prime Minister Vučić have exchanged visits and progress has been made in constructive negotiations. For example, the groundwork has been laid for a youth exchange scheme, the type of project that builds bridges between peoples, the type of project that embodies the genuine European spirit. More and more, the rapprochement between Serbia and Albania is becoming the driving force for cooperation in the region as a whole. The Western Balkan Six are in the process of opening up a better future for their peoples. The agreement on transport networks is a genuine milestone, as these networks will bring the region closer together – in economic, political and human terms – more quickly. Serbia now has a key role to play, in laying the ground for closer cooperation and stability, building bridges and safeguarding shared values in a shared neighbourhood.

Today, the EU and Serbia must pull together in the foreign policy sphere, all the more so because we face challenges of a completely new kind to the south and the east. In the Middle East, states are collapsing and Islamic State is waging a campaign of brutal violence, and in the east the conflict in eastern Ukraine shows no sign of coming to an end. In the face of geopolitical challenges such as these, my hope is that we will not allow ourselves to be divided and played off against one another, but instead that we will stand together and work together more closely.

There are many issues which we need to tackle together. One such is the increase in the number of refugees the region has to deal with.

I am well aware that this is a huge challenge for Serbia. The eyes of the world are on the refugee disaster unfolding in the Mediterranean, and it is intolerable that so many people should be meeting a wretched death at sea as they seek refuge in Europe. Basic humanity compels us to reach out a hand to save those in danger of drowning. I am also aware of the UNCHR statistics which show that today more people are seeking to reach Europe via the Western Balkans, and in particular Serbia, than by Mediterranean routes. One thousand refugees every day. Serbia cannot be expected to cope with this influx.

That Hungary’s response to this challenge should consist of a plan to build a 175 km-long fence along the border with Serbia is simply unacceptable. Isolating yourself is no way to solve problems. Building walls is completely at odds with the European spirit. Standing shoulder to shoulder, never leaving any one country to cope alone, finding solutions together — that is the European way!

The EU has already approved eight million euros of funding for Serbia to meet the cost of a migration management programme and has made a further million euros available to help support Serbia’s asylum system. A coordinated regional response is the only way of dealing with an increase in refugee numbers on the scale we are seeing now. The EU is ready, therefore, to work closely with Serbia. The European Parliament has always advocated that the countries of the Western Balkans should be offered the prospect of EU membership. We want the future of the West Balkans to be one of peace and stability, democracy and prosperity and we fully expect to be in a position to open the first chapter of negotiations with Serbia by the end of this year. That is when our real work will begin!

I must confess that there is one issue that is of great concern to the European Parliament: freedom of the press. When we open chapters we need to have a serious discussion about the media. The independence, diversity and freedom of the media must be guaranteed in all the EU Member States, and the same goes for any country wishing to join the EU. In your country, ombudsmen are fittingly called ‘protectors of the citizens’, but the protectors of the citizens do not need to be protected themselves.

We parliamentarians have an extremely important role to play in the negotiation process which is soon to begin. You will debate and pass the laws which will reform your country. You will have the task of explaining to your people why these reforms are important and right and of seeing that the laws in question are implemented properly. I wish you every success in that task. You have the full support of the European Parliament. We stand behind all those who have set out on the path to democracy and the rule of law, all those who extend the hand of reconciliation to their neighbours as the first step towards living together in mutual respect and peace.

Kocijančič: Gruevski and Hahn discussing how to get back on the path for Euro-Atlantic integration

Bilateral meetings at Pržino have come to a finish, and no closer to an agreement