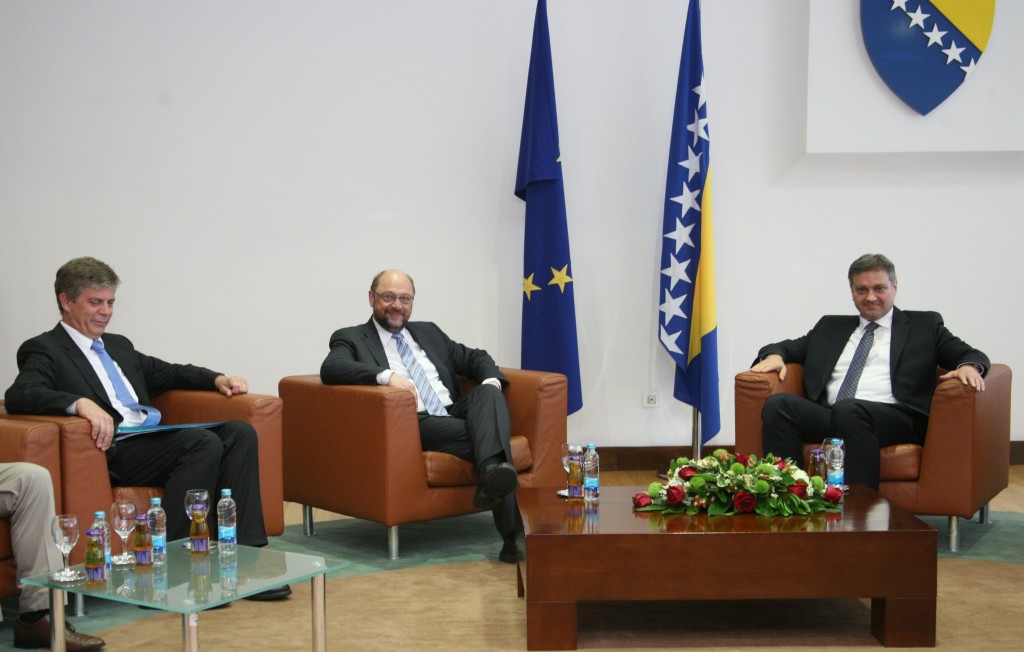 On 15th and 16th July 2015, the President of the European Parliament, Martin Schulz, visited Bosnia and Herzegovina. He met with the top officials of the country including the state Presidency, the Chairman of the Council of Ministers and the Foreign Minister. He was welcomed to the BiH Parliamentary Assembly by the Collegiums of the state level House of Representatives and House of Peoples.

President Schulz also met with students from around Bosnia and Herzegovina to talk about their expectations, hopes and concerns for the future. In order to see the impact of EU assistance funds in the country, President Schulz visited the Vijecnica (City Hall), which was reconstructed with the help of a total of 9 million EUR from the European Union.

“I am now concluding my visit with some mixed feelings. There is some progress in the country. I was deeply impressed by my meeting with the Chair of the Council of Ministers and with the Foreign Affairs Minister in the morning. I also had a very deep and fruitful exchange with President Izetbegovic yesterday. The country is still in a difficult economic situation. I had a meeting with young students from the University of Sarajevo yesterday and it was, for me, very important to listen to expectation, hope but also the worry of young people in the country. Youth unemployment, around 60 percent, remains one of the biggest challenges for all of us, not only here in Bosnia and Herzegovina […] for foreign investments, the country needs internal stability, and internal stability depends on the preparedness of the responsible politicians to cooperate. […]

“My feeling is what the country needs […] are foreign investments, employment, growth, economic reforms, cooperation.”

Read the full transcript of the press conference here http://europa.ba/?p=35394