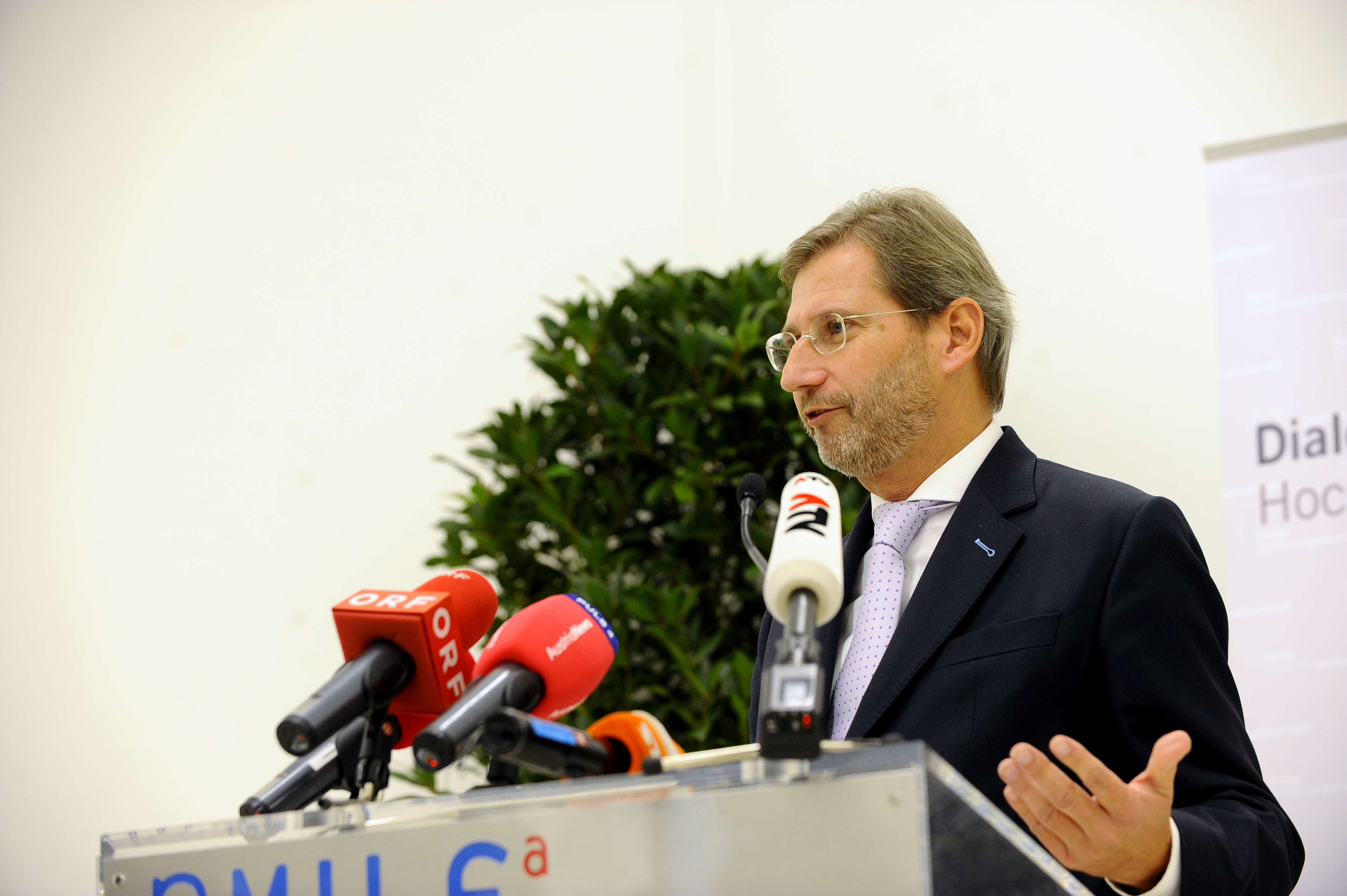 It is a great pleasure to be able to address you today. I do of course already know many of you, thanks to our intense work over the last ten months, in the enlargement countries and in our neighbourhood. But it’s good to see you together “in full force”.

I will start by giving you an overview of how I see the complex situation unfolding across our regions. I will then turn to some specific issues and countries. And I will of course be happy to discuss with you at the end.

Let me start with the European Neighbourhood Policy (ENP).

In the decade since the ENP was conceived, much has changed. There was a clear need to review and revise the Policy.

As you know, in March we launched a public consultation. We received over 250 contributions. I’d like to thank all the Heads of Delegation who worked so hard on getting the word out on this.

A Joint Communication setting out the revised ENP is foreseen for adoption on 18 November. This I can already give you a “sneak preview” of this Strategy. It will focus on the following:

First, we need to stabilise the neighbourhood more effectively. This means placing a greater focus on security issues, but especially recognising that the causes of instability and insecurity often lie outside the “classic” security domain. We must apply the entire EU toolbox more intelligently to stabilize our East and South.

A second key theme: Differentiation. We will work more pragmatically and effectively with each partner according to its aspirations and our own interests.

Related to this, we need a more effective way of promoting our values. We need to uphold EU principles and universal human rights, whilst recognising differing levels of leverage and engagement in different partners.

A “preachy” “one size fits all” approach – what I sometimes call “megaphone diplomacy” – is clearly not working. We need to become smarter and more realistic in incentivizing political transformation.

A further focus: Economic development, with an emphasis on youth and employability, and more differentiation in our trade and investment offer – because a lack of economic opportunities is often at the heart of instability.

Then migration and mobility, the importance of which in our Member States is clear. Partners must see that tackling irregular migration is a major priority for the EU, and that they must deliver. But we must also send credible signs that we are ready to do more to facilitate legal migration.

Finally, energy security is a key interest for both sides. We should work even more closely with our partners on increasing security of supply, but also on managing demand.

The adoption of a new ENP-Strategy is only the beginning. Where we are implementing recent agreements, this work will continue. But there is going to be a real shake up in our work with some countries. This requires an honest discussion to identify fewer and really shared priorities.

The ENP reporting process will also be much lighter, depending on the ambitions of the partner. And we will develop thematic platforms in areas like security, energy and migration, so we can also work better with the neighbours of our neighbours.

Still, the fact that we are reviewing our Neighbourhood Policy should not lead us to forget that a lot of good work is already happening.

Although there are conflicts and pressures from outside the Neighbourhood, we do have a positive story to tell.

The ENP has raised the profile of our neighbours inside the EU. Many of our relations have more political punch than ever before.  In some countries we are supporting reforms with significant results – not as rapidly as we would like, because we can’t run these countries for themselves; but with results for people’s everyday lives!

Riga identified four priority areas for the future: governance, mobility, market opportunities and interconnectivity. Success in these areas will demonstrate the benefits that the ENP can bring. That is the best antidote to Russian propaganda.

In the east we are in some ways ahead of the ENP review: we are already working towards differentiation with Armenia and Azerbaijan.  Our objective is always to boost the resilience of a country’s economy and governance, so it can make its own free and sovereign decisions.

Ukraine is the partner under the greatest pressure: we strongly oppose the illegal annexation of Crimea and push back against violations of Minsk agreement.

But while we support all efforts for peace, the EU must in particular take a leading role in supporting the reforms without which Ukraine will never be independent, strong, and prosperous.

The EU is already providing unprecedented financial support to Kiev. Our Delegation, alongside a newly refocused Ukraine Support Group, is playing a key role coordinating reform aid. But to put the economy on a new footing, vested interests and corruption must be tackled. We are seeing progress – but much more is needed.

Turning southwards, we also had a major success with the Informal Ministerial for all our southern partners in Barcelona in April.

Nevertheless, the challenges in this region are clear. Syria is in a terrible spiral and the neighbouring countries are reaching their limits. Tackling the challenge of displaced people is one of the key tasks. The EU has spearheaded the international response to the humanitarian and development challenge with €3.7 billion mobilised, also for Syria’s neighbours.

Tunisia is showing that the ENP can support successful transitions in the south. The EU, notably through the work of its Delegation, is supporting Tunisia at a critical moment. Still, the country is very vulnerable following the recent terrorist attacks, and the deterioration of the socio-economic situation fuels popular discontent.

It is essential that reforms advance and the EU, with the new ENP, will be more flexible to   accompany Tunisia – and other reform minded partners like Morocco. In a way, Tunisia is a test case for the new Neighbourhood Policy: we need to be able to deploy all means available in a smart and flexible way to bolster stability and reforms.

Let me now turn to the other part of my exciting portfolio: enlargement:

Let’s be clear about one thing: the statement that there would be no enlargement under this Commission has given rise to some confusion, which I have been able to dispel by now.

Enlargement is alive and kicking, and the European perspective remains as important as ever to stabilize South East Europe. This was clearly confirmed at last week’s Western Balkans Summit in Vienna.

But that doesn’t mean business as usual. On the contrary, I want to make our enlargement policy more robust, so it delivers better prepared new members when the time comes. We are not talking about technical negotiations. We are talking about a deep transformation process which needs time.

So the fundamentals remain the same: respect for the rule of law and fundamental rights, economic governance and public administration reform.

We will not compromise on those! If anything, we must push them even harder than before.

For example, we are strengthening the dialogue on economic governance. All enlargement countries now prepare Economic Reform Programmes (ERP). Their implementation will help their transformation into fully functioning and competitive economies.

Building and connecting transport and energy infrastructure is another driver of growth and jobs. This is why connectivity is at the heart of things.

Last week at the Western Balkans summit in Vienna, Prime Ministers committed to completing the most urgent priorities identified in the areas of transport and energy:

for example, to move forward with the regional core transport network and the regional integration of power systems.

Let me say a few things on individual countries and start with Turkey. The situation in Syria and the broader region has yet again underlined Turkey’s strategic importance to the EU.

Turkey has made very commendable efforts to host some 2 million refugees from Syria and Iraq, but we see an ever increasing influx to Europe via Turkey over the last few months.

So we need to intensify our cooperation. I am already looking into a considerable reallocation of our funds to assist Turkey.

The EU also has strong economic interests with Ankara which we need to tap to our mutual benefit. Therefore, we will be working on the modernisation of the Customs Union, on energy and other sectors.

Serbia is another key actor – I would even say a “swing state”. Under PM Vucic, Belgrade has taken significant reform steps. It has also just reached key agreements with Kosovo. This is crucial but it is not the end of the road. Serbia needs to remain fully engaged in the dialogue with Kosovo and make further progress. But the recent agreements make me confident that we will be able to open the first negotiation chapters by the end of this year.

In the former Yugoslav Republic of Macedonia, the EU helped to put together a roadmap leading the country out of its deep political crisis. This showed that our tireless work pays off. At the same time, it also shows that a country needs to have a credible negotiating perspective – if not, we risk losing them.

As regards the serious and systemic failings that have come to the fore through the wiretapping affair in Skopje, the Commission issued “Urgent Reform Priorities” with recommendations in the fields of the judiciary, the media and elections.

The political actors must now swiftly implement the agreement and the reform priorities. I intend to travel to Skopje in two weeks to push this forward.

Another country where political actors must live up to their responsibility is Bosnia and Herzegovina.

Here, we need to step up our efforts even further to keep the positive momentum of recent months. Again, it is clear that the EU as such needs to represent a real and in the end the only alternative to any nationalistic games.

These are fascinating, complex regions, vital to the interests of the European Union. And you, in our delegations, are at the heart of the matter.

Not simply as the traditional diplomatic “eyes and ears” on the ground; but in the front line delivering our assistance programmes and implementing EU policy. You are making a real difference for the lives of people in our partner countries, and you can be proud of that!

I thank you for your hard work under very often difficult circumstances. I look forward to continuing our cooperation. I promise to visit those who I haven’t met in their respective countries yet! And now I look forward to your questions.

Obligations of Serbia in the field of antidiscrimination

Small steps and (not so) great expectations. Notes from the Vienna Summit