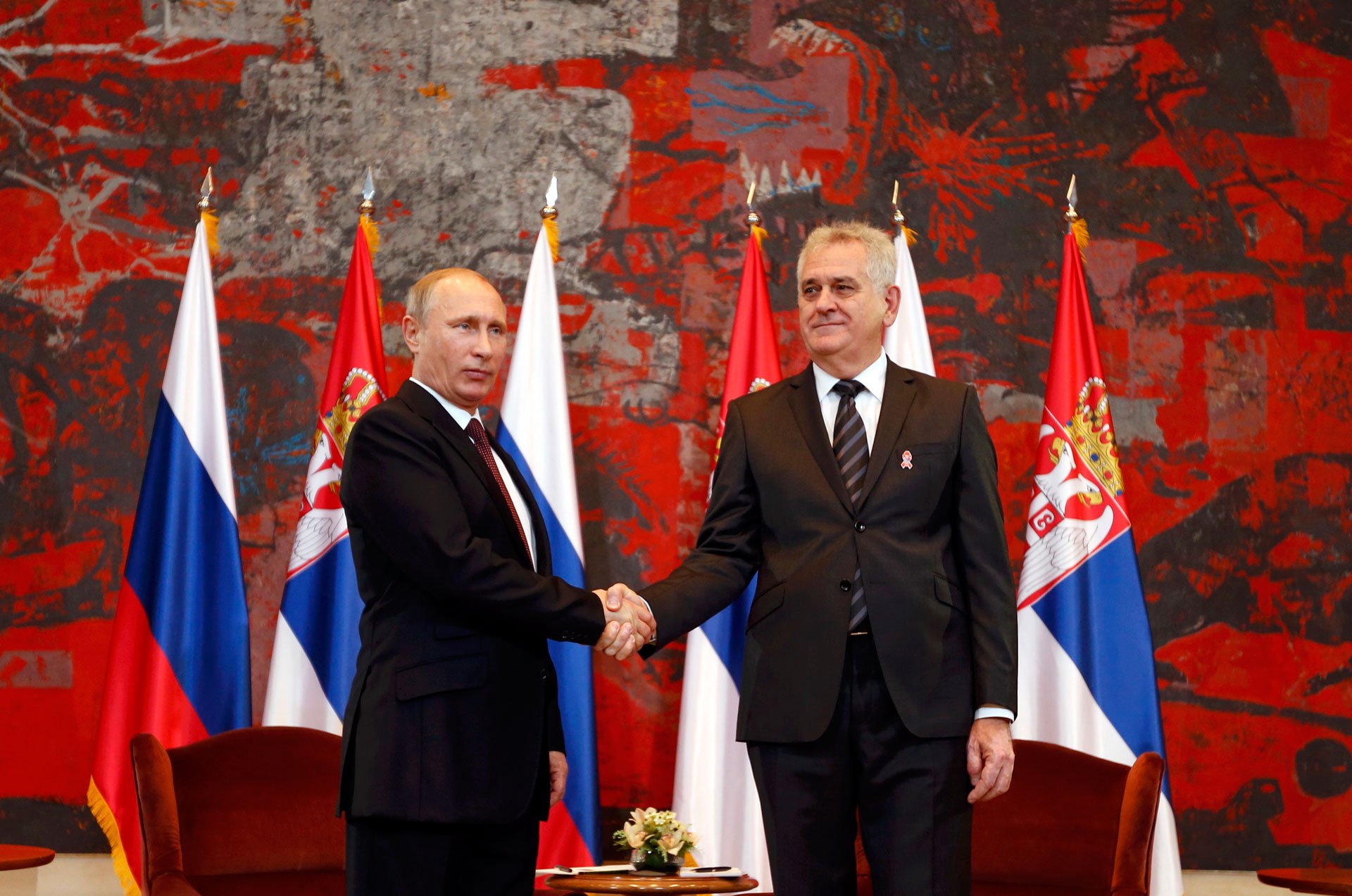 Troubled with domestic political instabilities, immigration crisis, unemployment, and bad macroeconomic situation, the weak political systems of the Balkans are under threat of collapsing. Political crises in FYR of Macedonia, Montenegro, Bosnia and Herzegovina, and Kosovo do not seem solvable in the short term, or with an easy solution, and each one of the prime ministers in the region seems to be involved in them directly. In Republika Srpska, one of the two entities of Bosnia and Herzegovina, Milorad Dodik continues to play a destabilizing role in the country. In Montenegro, the opposition is protesting against their Prime Minister, Milo Đukanović, who is ruling the country for almost three decades, which makes him the longest ruling non-crowned individual in Europe.[1] FYR of Macedonia’s Prime Minister Gruevski is still being shaken by the political calamity caused by the opposition leader Zoran Zaev, who provided proof of wiretapping more than 20,000 Macedonian officials. Kosovo’s parliament is completely in chaos, with tear gas incidents being the main item on the parliamentary agenda. Lastly, like cherry on top, Serbian Prime Minister Vučić paid an official three-day visit to Moscow, where he made worrying statements about ordering new military equipment from Russia. In a situation like this, the Russian influence in the region is on the rise, and the weaknesses of the EU foreign policy in the region are being highlighted on a daily basis, especially in Serbia.

While there seems to be a common belief that Russian influence was always strong in the region, in fact, Russia changed its attitude towards the Balkans just in 2007, when Putin came to power. In accordance with Putin’s strategy of re-inventing Russia as a superpower, it turned towards the Balkans. Moreover, the key stakeholders in Moscow have identified Serbia as the “key country for Russia in the Balkans.”[2] Yet, as the countries in the region opted for the path of EU and NATO integration, it became more difficult for Russia to exercise its influence. However, it redefined its strategy towards the region and is now, with varied degrees of success, exercising both hard and soft power tools in the region, having the most success exactly in Serbia. There are five reasons most commonly present in the political discourse:  energy dependence on Russia, foreign policy issues in which sometimes alienated Serbia can only count on Russian support, very good interpersonal relations between the President Nikolić and President Putin, big infrastructural projects, and cultural affection that a large number of Serbian population has towards Russia.

Firstly, Serbia is completely energy dependent on Russia. Even the small energy production it had was lost in 2008 when the national oil company was sold to the Russian Gazprom. This transaction remains highly controversial, with WikiLeaks cables showing top governmental sources saying that the company was sold at an undervalued price for a vague promise of the Russian support with Kosovo.[3] However, even if we put that aside, the most important issue that emerged is the fact that by selling the company Serbia cemented its energy dependence, makes it quite politically difficult to have and show anti-Russian attitudes.

Secondly, there are numerous foreign policy issues that define Serbo-Russian relationship. Even as a EU candidate country, Serbia did not introduce sanctions against Russia, and did not align its foreign policy with the rest of the Union as Chapter 31 of EU membership negotiations requires. The reasoning behind this is that the Serbian political elite expected Russian support for their campaign against the UN resolution about Srebrenica, and nowadays against Kosovo’s UNESCO membership bid in return. While this might make sense, it is in fact putting Serbia in a situation in which it is trying to sit on two chairs, none of them stable. Moreover, the UK Ambassador made it clear that Serbian foreign policy as it is today is unsustainable, by stating that the candidate countries must align with the Union if they want to make progress on their integration paths.[4]

Thirdly, there is a strong interpersonal relationship between the Russian and the Serbian president. In 2014, President Nikolić awarded President Putin with the nation’s highest decoration – Order of Republic of Serbia, honoring his contribution to the strengthening of the ties between the two nations.[5] While there is a consensus among Serbian Prime Minister Vučić and President Nikolić that Serbia should pursue foreign policy of “equal distance,” and continue towards the EU while at the same time keeping its strong Russian ties, it is visible that Nikolić has greater support from Moscow. Namely, the main Russian media, also the main source of the Russian soft power influence in the region and under Putin’s direct control, are not kind with Prime Minister Vučić, to say the least. The US Vice-President Biden also made this very clear when he said after his meeting with Vučić in Washington, that he knows that Vučić “annoys the Russians.”[6]

Fourthly, Russia holds the funds for one of the biggest infrastructural projects in Serbia – the railway renovation. Moreover, an important part of Serbian exports goes to Russia, making it the third largest importer of Serbian goods.[7] Hence, Prime Minister Medvedev very strategically stated in Moscow last week that Serbia will lose the free trade agreement privileges it currently has with Russia after joining the EU.[8] And lastly, announcement by Prime Minister Vučić that Serbia will be buying weapons from Russia is another eyesore to the West.[9]

Finally, there is an undeniable affection that a large number of Serbian citizens have for Russia.  The discourse of Slavic brotherhood, historic cooperation, and support that Russia gives to Serbia in the international arena is still very present in the public discourse. Moreover, the Serbian Orthodox Church, and a number of pro-Russian NGOs and political parties encourage it. With the recent vote against Kosovo’s UNESCO bid, the sentiment about Russian friendship and protection is solidified in the public opinion, while 61% of interviewees who participated in a survey published by New Serbian Political Though expressed their support for stronger ties with Russia.[10]

This is very indicative of the situation in which Serbia finds itself. While all parliamentary parties are pro-EU, and Serbian membership efforts are never brought into question, the support from citizens is dropping. Today, only around 40% of Serbian citizens are in favor of European integration. This is explained by the fact that Serbia is progressing very slowly on its integration path, and ever more so, everything that comes from Brussels is considered as a new “condition” for membership in the Union. Another reason for drop in support for the EU is the recent EU-Kosovo Stabilization and Association Agreement that was seen in Belgrade as a reward for Kosovo even though it did not fulfill the obligations coming from the Brussels agreement with Serbia. However, while these arguments somewhat explain the Serbian positive attitude towards Russia, they do not make Serbian foreign policy in any way less schizophrenic. It is impossible for a country to believe that it could successfully balance between the two contested powers, and its political elite has to make a clear choice where it is headed. Hence, for all reasons listed above, and for the sake of political stability of not only Serbia, but also the entire region including FYR of Macedonia and Montenegro, it is important for the EU to take concrete steps that will show its devotions to the Balkans, and help the pro-EU governments overcome this seemingly desperate predicament. If the Union fails to do so now, and does not show itself as a real partner in the region, the consequences might be too large to remediate in the future.