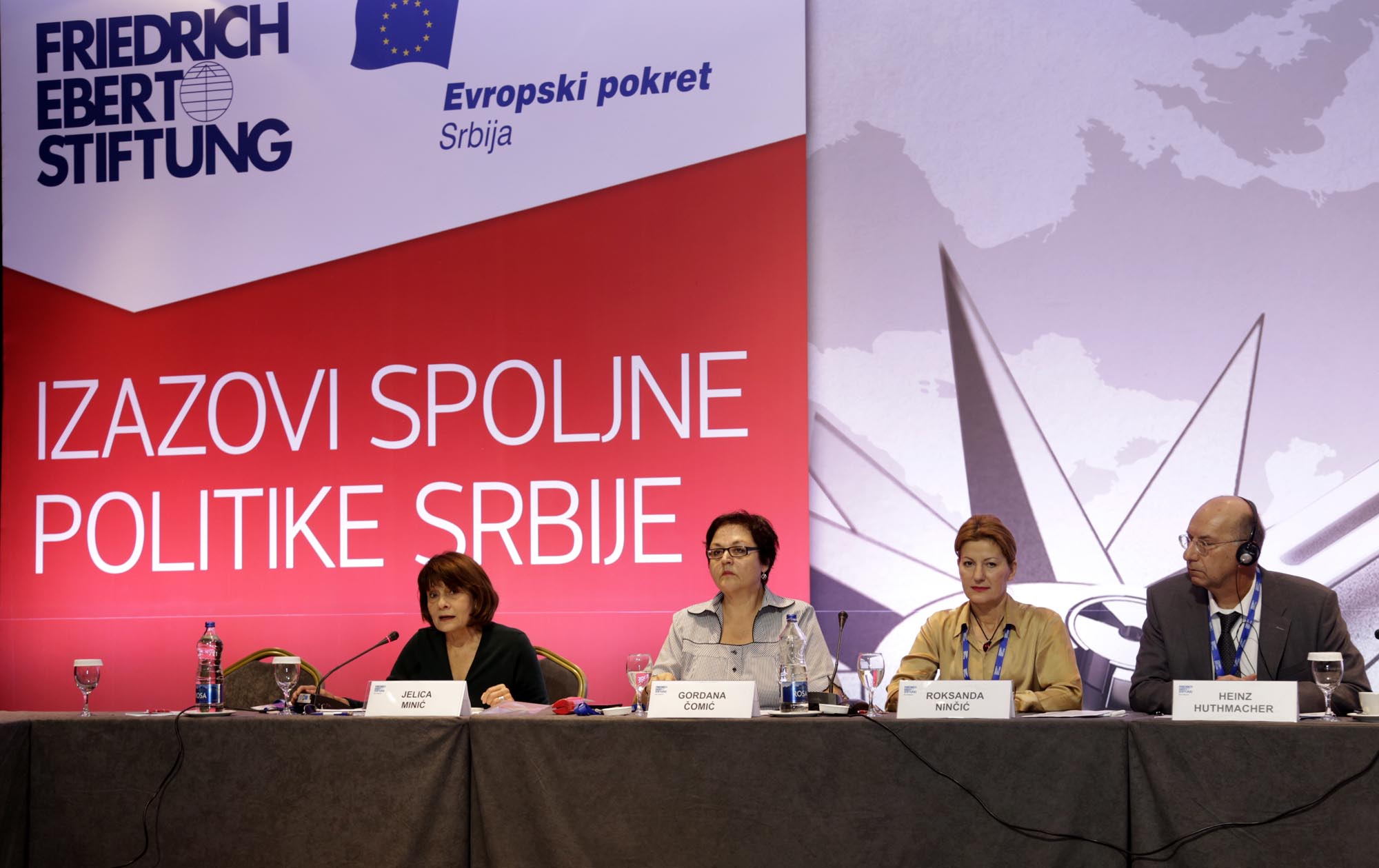 Opening of the conference

BELGRADE, 12.11.2015. – The Friedrich Ebert Foundation and the Forum for International Relations of the European Movement in Serbia are organizing the Conference “Challenges of Serbia’s Foreign Policy” in Belgrade, Serbia.

Having in mind the dynamics of international relations in the past five years, a public debate on Serbian foreign policy is contributing to the better understanding of the wider constellation in which domestic policy choices are taking place, Serbian Presidency to the OSCE and expected alignment of Serbian foreign and security policies to the EU Foreign and Security Policy in the context of opening the Accession Negotiations with the EU are in the focus of the analysis during the conference. The aim of the conference is to come forth with a strategic outline of the Serbian foreign policy for the next period.

At the conference following key issues are discussed: results of Serbia’s foreign policy so far; predicting the future of foreign policy actions and relations to the EU; shaping relations with regional partners and the role of Serbia as a candidate for the EU membership in the current circumstances.

Among the participants are Heinz Albert Huthmacher, the Director of the Friedrich Ebert Foundation Office in Belgrade, Roksanda Nincic, the State Secretary of Ministry of Foreign Affairs of the Republic of Serbia, Gordana Comic, the Deputy Speaker of the National Assembly of the Republic of Serbia, Karsten Dietrich Voigt, former member of the Bundestag and many others.

At the opening speech, Ms. Jelica Minic, the President of the Forum for International Relations of the European Movement in Serbia, pointed out that there is a misunderstanding in the public that the foreign policy is created only in the state’s institutions, such as the President, the Prime Minister, and Minister of Foreign Affairs. “There is much more stakeholders who are participating in this process, and this conference is a homage to everyone who are creating the foreign policy.”

Mr. Huthmacher, FES Belgrade Office Director, pointed out that it is possible to read from the Progress Report on Serbia that the country is still dedicated to the accession to the European Union, and gave a hope that the first chapters will be opened by the end of the year. “We are witnessing two current crisis in Europe: one is the crisis in Ukraine, and the other is refugee crisis. It is shown that the role of the major players in the international relations in the current period is more important than it was in the previous time, and that the role of the EU has been diminished in this situation.”, Huthmacher said. He added that one can get the impression that the EU is more disintegrated than it is integrated these days. “These events are having the huge impact on the Western Balkans, and it could be direct or indirect. These events could influence policies politically and strategically, and that is the reason why we need more dialogue both in the EU and in the Western Balkans.”

“Even the path to the accession to the EU will be long, I am convinced that the Serbia belongs to the Europe, and that is the reason why we will keep supporting Serbia on this path” Mr. Huthmacher concluded.

Ms. Nincic said that the main goal of the Serbian foreign policy is the accession to the EU, and that from 2012 the institutional relations between Serbia and the EU have been improved. She said that the EU is the major Serbian trade partner. She also spoked about Serbian approaches towards the Kosovo bid for UNESCO membership, relations with Russia, current refugee crisis and the crisis in Ukraine, as well as informal regional cooperation, such as Western Balkans 6 summit. Ms. Nincic concluded that “the Serbian foreign policy will be fully aligned with the European when Serbia become an EU member.” Until then, Serbia will align its foreign policy step by step.

Deputy speaker of the National Assembly of the Republic of Serbia, Ms. Comic said that the current key issue in Europe and in the world is “building of the walls”. “There were walls in Europe and in the world in the previous time, and we thought that we will never build them again when the Berlin wall was teared down”, she said, and added that we are living in the time of the building of the walls between countries, people, and cultures. “MEPs do not understand this problem or they are not taking it seriously” Ms. Comic pointed out.

“Politicians can do only two things. One is the creation of cooperation, and the other is the creation of the fear. We cannot do both. If we do both of them, people will be confused and we are risking our disappearance from the political life” she stated. “Our task as Members of the Parliament is to create cooperation, and that is the only thing that we have to have in our minds” she concluded.

No comment from Brussels on suspension of ZSO deal