BELGRADE – Today marks 20 years since the Dayton Peace Agreement was reached in 1995 by the presidents of Bosnia, Croatia, and Serbia at the Wright-Patterson Air Force Base outside Dayton, Ohio, bringing the war in Bosnia-Herzegovina (BiH) to an end.

This year, the date is being marked in the atmosphere of still present divisions between the entities, with Sarajevo intent on strengthening the institutions of the Federation of Bosnia-Herzegovina, but also with Republika Srpska resolved to have its say on relations in the common state in a referendum.

International officials do not like the idea of holding the referendum, and Belgrade advises Republika Srpska to show restraint concerning this intention. 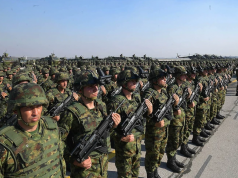 Zaev and Mitsotakis discuss the implementation of Prespa Agreement in New...