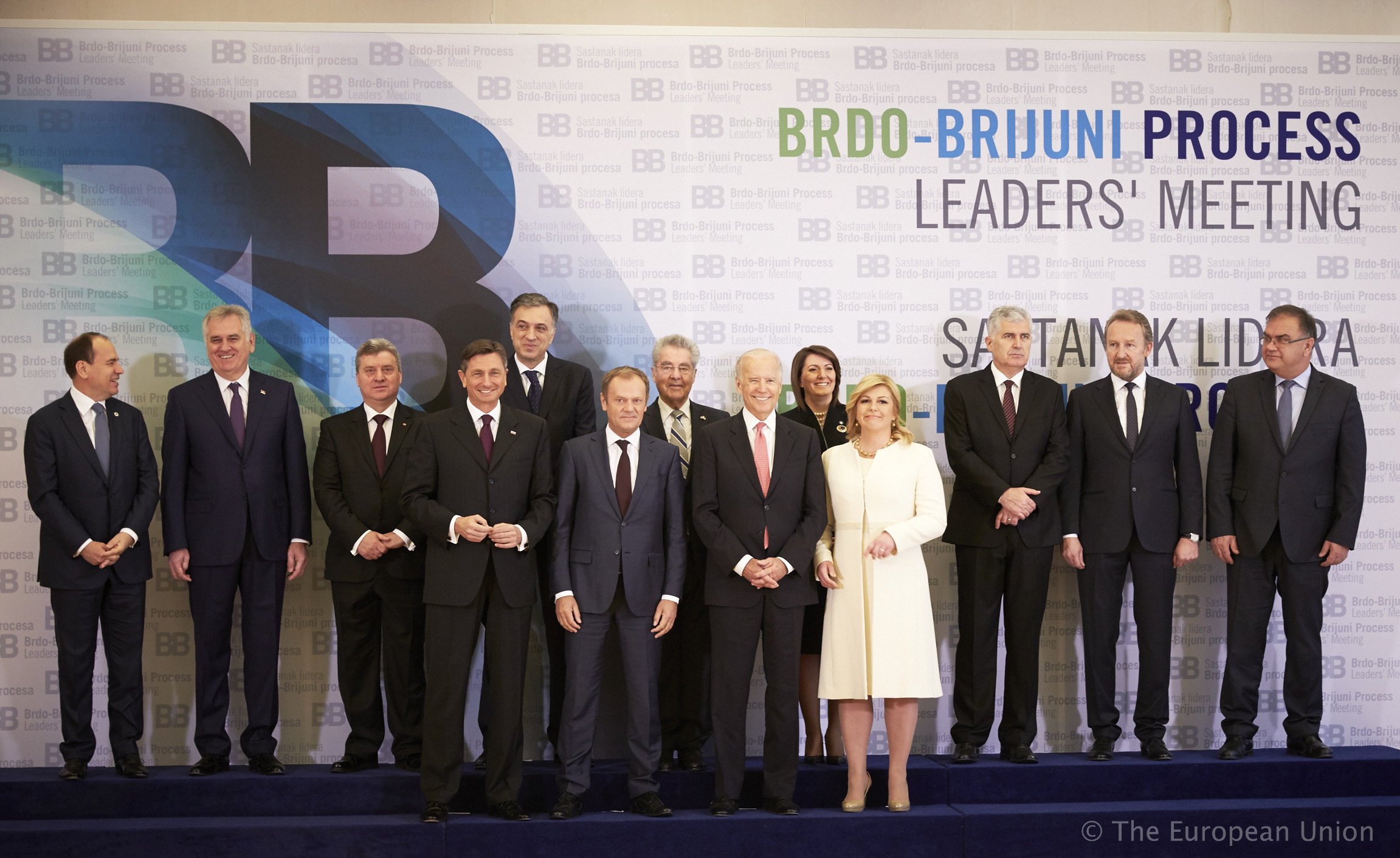 It is good to be back in Zagreb and to attend the Summit of the Brdo-Brijuni Process. In fact, it is less than three months since my last visit to Zagreb.

So, let me first thank President Grabar-Kitarović and President Pahor for their kind invitation. I greatly appreciate their personal engagement in the Brdo-Brijuni Process. Geography, history, recent events and plain common sense all teach us the importance of the Western Balkans. The Brdo-Brijuni Process is an essential contribution to the reconciliation process in southeast Europe. And a reconciled southeast Europe is crucial for all Europe. For our common peace, prosperity and stability.

Today, twenty years after the Dayton agreement was reached, we concluded that Euro-Atlantic and European integration, will help transform southeast Europe.

Today, what we need most of all is real progress: to reinvigorate the EU enlargement process for candidate countries, and to step up the Euro-Atlantic integration process for countries aspiring to join NATO. I fully support the initiative of regular dialogue on security at the operational level between the European Union, the United States and the countries of southeast Europe.

For me, there is no doubt that the future of the Western Balkans is with the European Union. The EU remains firmly committed to the enlargement policy for this region that we established back in Thessaloniki. It is crucial for peace, democracy and stability throughout the whole region.

The region and the whole of Europe face enormous challenges today with the influx of refugees and migrants. In the past days, I visited several countries in the region. And I can only repeat: we must continue working on this together in a coordinated and cooperative manner. The European Union is ready to provide support.

The recent events in Paris, Ankara, Baghdad, Beirut, Bamako and in the Sinai or in Tunisia brutally demonstrated the growing security challenges posed by violent extremism. The Western Balkans remains a key region also in this context. A comprehensive approach against terrorism must include actions to counter extremism, prevent radicalisation and incitement to terrorist acts, as well as tackling the issue of foreign fighters. These challenges can only be solved through common efforts. The European Union will continue to work closely with southeast Europe and the United States on this.

This is our common responsibility. We live in hard times, in a world that is inter-connected as never before. Cooperation among us is as vital as it has ever been. I look forward to the further strengthening of our relations to address the common challenges we face.

Before concluding, let me comment on the situation after the downing of a Russian warplane by Turkey. As I said yesterday, this is a dangerous situation and all need to stay cool headed, calm and use all channels of communication to de-escalate tensions. This incident underlines the difficult situation in Syria, where there are different actors with different interests conducting different operations with different aims. There is only one way to avoid such incidents in the future: all resources should be concentrated on the fight against ISIL. This should be a common objective. There will never be a coalition to fight the moderate Syrian opposition. Everybody needs to understand that. Thank you.

Montenegrin Parliament to vote on NATO membership in Cetinje