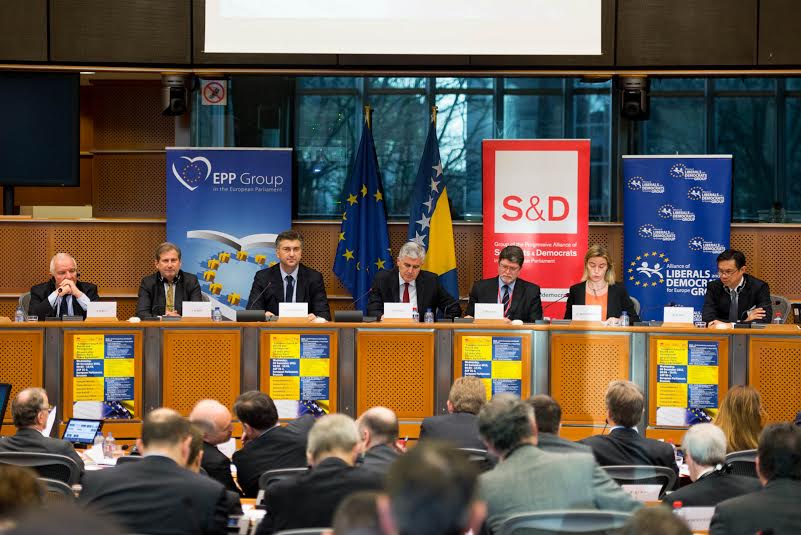 Thank you very much, Tonino Picula. Thank you, Andrej Plenkovic. I would like first of all to thank the three political groups that have organised this. We are at the European Parliament and this is a political initiative. I think it is a timely and important one. And let me also thank the Presidency of Bosnia and Herzegovina, not only for being here, but also for having shown in this last year strong leadership for the benefit of the citizens in their country and shown the capacity to work together for the sake of their all people.

If we look back we see that a lot has changed, and for good. Twenty years after Dayton, this is for sure time to look ahead. To look ahead means to look at our common future inside the European Union. As Andrej rightly said: the way from Dayton to Brussels. But let me just spend one minute, only one, to look back to one year ago. The political situation in Bosnia and Herzegovina and the political perception in the European Union of the country was completely different from the one we are seeing today and this is thanks, I believe, to our common work and to your leadership.

And if we look twenty years back, the Dayton agreement put an end to the bloodiest war in Europe since World War Two. The accords managed to stabilise Bosnia and Herzegovina and to let the reconstruction begin, with all its limits and shortcomings it guaranteed the unity and the stability of Bosnia and Herzegovina for two decades. Still Dayton cannot be forever and was not intended to be forever. The negotiators in Dayton hoped that the post-war politics would be able, I quote, “little by little, to bring the country together”. And we all know that there is still much that has to be done in this respect.

Twenty years is indeed a long time, but perhaps not enough to expel all the toxins of a civil war. And the overall political climate in Europe might not facilitate in these days this task. Because our continent over all is experiencing a tendency, a rather sad tendency, to look inwards. And too often to look at each other with fear and suspicion.

We do not need to draw new dividing lines inside Europe, based on ethnicity, nationality or religion. Your history tells us how dangerous this can be. Looking at our European identity, this has been forged through centuries of exchanges between peoples and cultures. And our dark times have been the times of conflicts within Europe. Our culture, our European culture, is based on openness and not on segregation. What we need is to build new spaces of coexistence, of cooperation, where everybody’s rights are recognised, where all can contribute to the common good. And this is true for Bosnia and Herzegovina as well as for the whole of Europe and for our entire neighbourhood.

Nothing is wrong with keeping one’s national and cultural identity. On the contrary, I really believe that strong identities are what make us open to diversity. It’s the contrary that it is a problem. It is when our identities are weak that we fear the other and the opening to the other.

So, nothing wrong about keeping a strong national and cultural identity. On the contrary; unless the nationalist discourse becomes a way to divert the public opinion from the real issues at stake – being it the economy, being it the European path, being it the wellbeing of the citizens. This is true for Bosnia and Herzegovina, this is true for the European Union. On this also we are together. The priority are the citizens of the European Union, in our case, of Bosnia and Herzegovina, also in our case, because we do care for our European people.

This is why this last year was so important. In December last year, exactly in these days, the European Union Council agreed to engage in a “renewed approach” to overcome the stalemates that hindered Bosnia and Herzegovina’s EU path. We managed to move forward because we all agreed that we had to give priority to the concrete issues affecting the life of the citizens. We agreed inside the European Union that social-economic reforms had to come first, and we agreed together in Sarajevo exactly one year ago that this had to be the priority. And together, let me say, one year after we have shifted our focus on making a difference to people of Bosnia and Herzegovina. I believe that this is what brought us so far one year after that.

Much has been achieved following this new commitment. I recommended to the EU Council to make the Stabilisation and Association Agreement enter into force on 1 June. All of Bosnia and Herzegovina’s government levels agreed the scope and the depth of reforms to be undertaken.

Economy has been the first point on the agenda: creating new opportunities, new jobs, especially for the young people of the country that are the ones that are demanding changes on the European path. This is crucial for the stability, for the prosperity of the country and again for the prosperity of the people. But today the reform process covers a much broader agenda – not only the economic and the social one.

International partners, starting from the US and international financial institutions, have been and still are helping us to make these reforms happen daily. Addressing all the country’s issues is not easy and will not be easy, but it is indeed possible. And, I think you have shown this this year. Success is fully in the hands of your country, of your leadership.

At this point your country is considering a possible application for EU membership. This is an achievement in itself. Let me say this very clearly. Difficult to think of something like this only a year ago. To make an application credible, Bosnia and Herzegovina will need to continue to deliver on commitments made to its own citizens. Not so much to the European institutions, but to its own citizens. I will always keep in my heart and in my mind the words and the expressions of the young people, most of them women, that I met several times in Sarajevo, hoping for their country to become part of the European Union. That is the commitment you have all collectively made and this is the commitment to which we are all trying together to respond in a positive way.

Much has been achieved as I said in just one year. This week I will chair the first ever EU-Bosnia and Herzegovina Stabilisation and Association Council that is going to happen a day after tomorrow here in Brussels. And earlier today we have discussed with the Presidency what needs to be done to move forward concretely and together. And I am planning – we are discussing this – to come back to Sarajevo soon. That would be the third time for me, maybe together with my good friend Commissioner Johannes Hahn, to continue our common work together in partnership.

I believe that the future of your country – and of the whole Western Balkans – is within the European Union. I will never stop saying this until this happens.

In Dayton, the future of Bosnia and Herzegovina was shaped by the country’s leaders together with your neighbours and the international community. Twenty years after, the responsibility is yours and fully yours. You are accountable to your people.

I truly hope we will soon be able to open a new chapter in the country’s history. Bring your country together, work for all of your citizens. We will be with you as we have been, as we always be, and together we will build our common European future. I thank you very much.

Link to the video:
http://ec.europa.eu/avservices/video/player.cfm?ref=I113901

Hahn: Bosnia and Herzegovina needs to move from a Dayton logic to a Brussels’ perspective