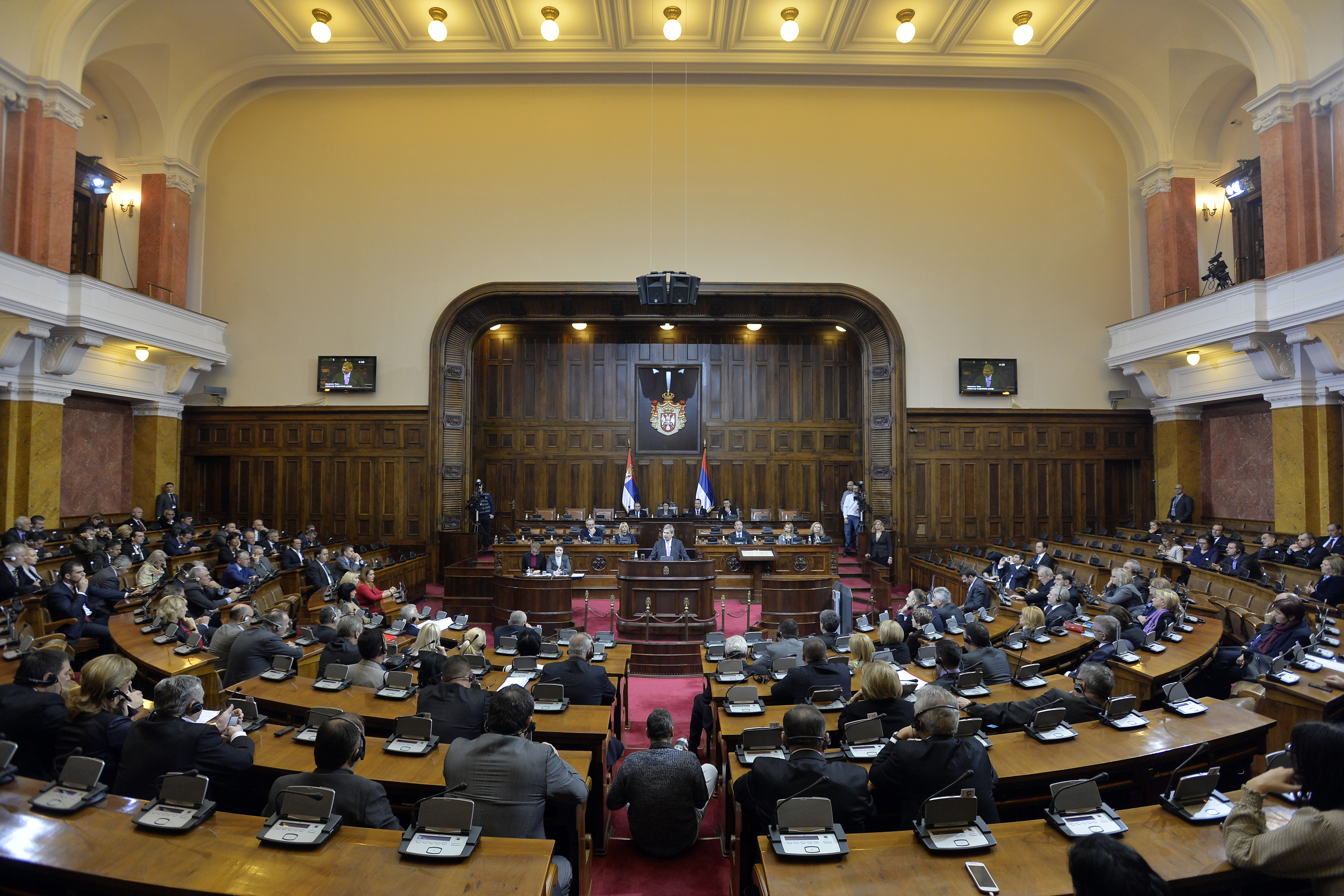 Johannes Hahn in National Assembly of Republic of Serbia

Mrs Speaker, Honourable Members, it is a great honour for me to address the Serbian parliament.

The timing is just right because next Monday, the European Union and Serbia will open the first two negotiation chapters, chapters 32 – financial control, and chapter 35 which deals with the normalisation of relations between Belgrade and Pristina.

The intergovernmental conference on December 14th will mark the beginning of the substance of our accession process and make the perspective of Serbia’s joining the EU family not just an idea, but a tangible and reachable objective.

This is the result of our common efforts and strong commitment.

As assessed in the Commission’s report of 10 November, Serbia has reached major achievements on its EU path. Let me stress here the intensive work to finalise the action plans on the rule of law, the key agreements with Kosovo, and the important steps taken to improve regional ties and strengthen relations with neighbouring countries.

The Serbian government has also moved ahead with an ambitious economic and structural reform agenda which, I am confident, will contribute to a more attractive business environment: restoring growth, improving competitiveness and creating new jobs. The first encouraging results can already be seen.

I am also impressed by the very positive and humane manner in which Serbia and Serbian citizens have handled the unprecedented numbers of refugees and migrantsarriving in the country under very difficult circumstances. This is widely appreciated by Member States of the European Union. We will support Serbia in facing this challenge just as we did after the floods of last year.

All this has required courage and effort and shows Serbia’s ability and willingness to deliver.

On our side, we have also been working very hard to support and drive Serbia towards itsstrategic goal of membership of the European Union. I remember the first time I visited Serbia one year ago in my capacity as Commissioner responsible for enlargement negotiations. I stressed the depth of my commitment to Serbia’s EU path and I meant business!

The upcoming inter-governmental conference will show that the EU delivers on its commitments once countries make the necessary progress.

A renewed commitment is needed

We should now build on this momentum. December 14th will mark the beginning of a process, and I am confident that this process will continue, while allowing the sound implementation of necessary reforms.

What is needed now is a renewed commitment to move decisively forward with reforms, in particular in the areas of the judiciary, the fight against corruption, freedom of expression – which is non-negotiable from EU perspective -, public administration, anti-discrimination and the economy.

Equally important is further progress in normalisation of relations with Kosovo, which is key to moving forward through accession negotiations.

Serbia needs these reforms not because of the European Union, but because they have the potential to modernise Serbia, bringing benefits to its people. The Serbian administration will be more efficient, Serbian citizens will have access to better public services, better education for their children and better healthcare. The economy will grow as a confident business sector thrives in a more stable environment, where the rules are transparent and there is no room for corruption.

Serbian parliament has a key role to play

Member States are currently assessing Serbia’s state of preparedness in all areas covered by the EU acquis. In all those areas, I know we can count on Serbia and the Serbian government to make sustainable progress across all areas.

This parliament is the institution which also ensures a high level of alignment with the European Union acquis.

I know that an impressive number of legislative drafts have been submitted to you over the last year, and more are on the way! It will be important to allow enough time for all the preparatory steps, in particular consultations with stakeholders, international partners and of course the Commission. This House is the forum where reforms should be discussed, challenged, debated and strengthened.

In that regard, urgent procedures should only be used for real emergencies and fully justified exceptions. This is essential for ensuring respect for the Rule of Law and the overall inclusiveness of the accession process.

The Serbian parliament should also play a lead role in the oversight of the executiveand monitor effective implementation of reforms on the ground, in close cooperation with independent regulatory bodies.

You have also a role to explaining to the wider public. The European integration process is already becoming an increasingly concrete experience for all in Serbia. This is not only true for the administration, civil society, business people, students and researchers. It is also true for society at large, for all citizens of Serbia, as these reforms touch upon a large variety of sectors and influence many aspects of daily life.

Another issue that is of utmost importance is regional cooperation and good neighbourly relations and here I would like to acknowledge Serbia’s constructive commitment. The enlargement process for the region should be an anchor for building stability. We simply cannot afford any backsliding either in terms of reforms being slowed down or regional ties being loosened or even broken again.

That brings me to a vital element of regional cooperation: the connectivity agenda.

Building and connecting transport and energy infrastructure is at the very heart of our efforts. The Vienna summit and the overall Berlin process have created a positive momentum and helped the countries in the region to achieve substantial progress. The commitments made by Serbia and the other countries at the summit now need to be fully implemented.

Not just the infrastructure investments, but also the supporting measures that will unlock their full potential, such as smoother border crossing procedures, interoperability, maintenance plans.

The EU is Serbia’s main partner in facing global challenges

Serbia is also an important foreign policy partner for the EU.

We have all been impressed by the responsible handling of Serbia’s Chairmanship in Office of the OSCE during 2015 and the successful handling of last week’s Ministerial in Belgrade.

We have built a Union of 28 Member States that has achieved an unprecedented degree of economic and political integration.

A Union that is, first and foremost, a place where peace and stability prevail and war has become unthinkable. A Union founded on the shared values of democracy, fundamental rights and the rule of law.

But stability, be it political, economic or financial, is a fragile concept. We have suffered the worst financial and economic crisis since World War II.

Our neighbourhood – from Ukraine to Syria, the Middle East and North Africa – remains unstable. Numerous challenges lie ahead of us ranging from terrorism and migration to energy shortfalls. In an increasingly interdependent world, these challenges are not exclusive to Europe. These are global challenges that we need to address together as a Union and together with Serbia.

Because a European Serbia is part of our common vision. There should be no doubtabout it.

The whole European Union, that is, its institutions and the 28 Member States, firmly stand by Serbia’s European perspective.

The EU is Serbia’s biggest provider of assistance

This is why we “invest” substantially in Serbia. The European Union is Serbia´s biggest provider of assistance, with about 200 million euros each year in grants, without counting the unprecedented 170 million euros provided in the aftermath of last year´s dramatic floods of which I still have very strong memories. We have also provided immediate funding and humanitarian aid to support Serbia in dealing with the afflux of refugees and we are working closely with the Serbian authorities on further medium to long term assistance.

The European Union is also Serbia’s top partner in terms of trade, investment, and favourable loans. We also “invest” in Serbia’s youth. More than 1600 Serbian students will have benefitted from the Erasmus programme in 2015.

I hope that this number will continue to grow in the years to come, because today’s younger generation will shape tomorrow’s Europe.

A lot of work lies ahead of us. But I am confident that together, as partners and friends, we will handle the next steps smoothly and soon open a new chapter of our common history to bring Serbia where it belongs: into the European family.

Rama: SP-SMI coalition, a chance to DP to listen to reason

Ederer, Dačić: Serbia most important partner of Germany in region