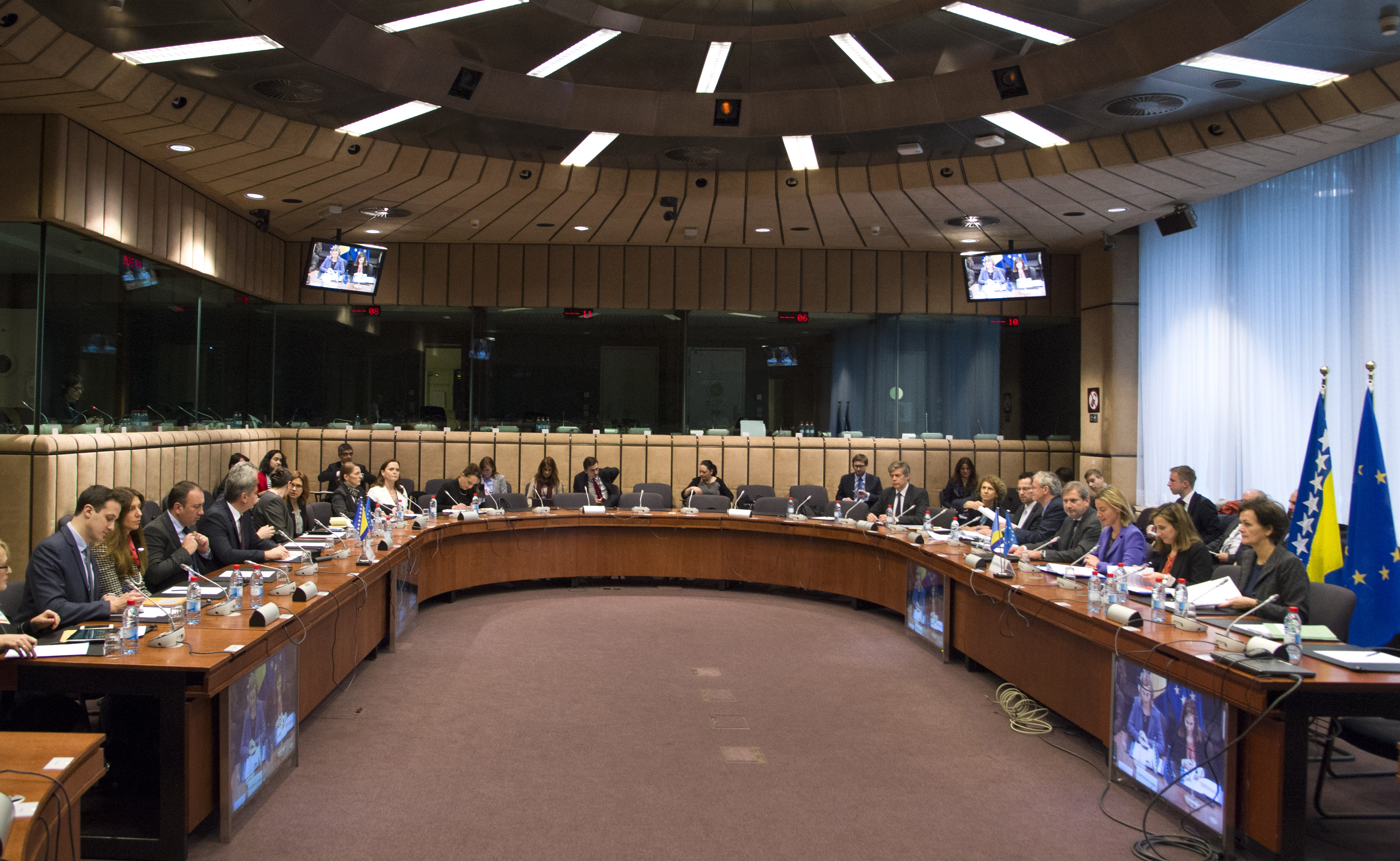 General view of the meeting

The Stabilisation and Association Council (SA Council) between Bosnia and Herzegovina and the European Union held its first meeting on 11 December 2015. The meeting was chaired by Ms Federica MOGHERINI, High Representative of the Union for Foreign Affairs & Security Policy and Vice-President of the European Commission, in her capacity as President of the Foreign Affairs Council. The Delegation of Bosnia and Herzegovina was led by the Chairman of the Council of Ministers Denis ZVIZDIĆ who was accompanied by Deputy Chairman of the Council of Ministers and Minister of Foreign Trade and Economic Relations Mirko ŠAROVIĆ and Minister of Foreign Affairs Igor CRNADAK. Commissioner Johannes HAHN also took part in the meeting.

The SA Council welcomed the entry into force of the Stabilisation and Association Agreement on 1 June 2015 and commended Bosnia and Herzegovina for its progress in 2015 on its path towards the European Union. The European Union noted that the Stabilisation and Association Agreement (SAA) is an important step for Bosnia and Herzegovina’s EU integration process and that it provides the broad framework within which the EU and Bosnia and Herzegovina will intensify their co-operation on the political criteria, economic criteria as well as trade and legal approximation with the EU acquis.

The SA Council recalled that the SAA will help Bosnia and Herzegovina harmonising its legislation and policies with EU acquis in key areas creating a new impetus for the country’s economy and economic welfare of its citizens, as well as additional opportunities for Bosnia and Herzegovina and EU companies alike. Moreover, the SA Agreement will further reinforce the benefits of the Interim Agreement especially in the area of trade. Improvement of internal coordination on EU affairs will enable Bosnia and Herzegovina to fully benefit from opportunities provided under this agreement especially once an effective and efficient coordination mechanism on EU matters is set-up and functioning and adjusted to reflect the entry into force of the SAA.

The SAA will remain at the core of the relationship between the EU and Bosnia and Herzegovina until accession. Upholding of all commitments and obligations under the SAA, including those relating to its adaptation following the accession of Croatia to the EU, is an important element of the commitment to EU integration process. The SA Council welcomed Bosnia and Herzegovina’s statement that negotiations should be resumed swiftly to find a mutually agreeable solution in line with the principle of traditional trade.

The SA Council welcomed the Strategy paper and the Report on Bosnia and Herzegovina adopted by the Commission on 10 November 2015.