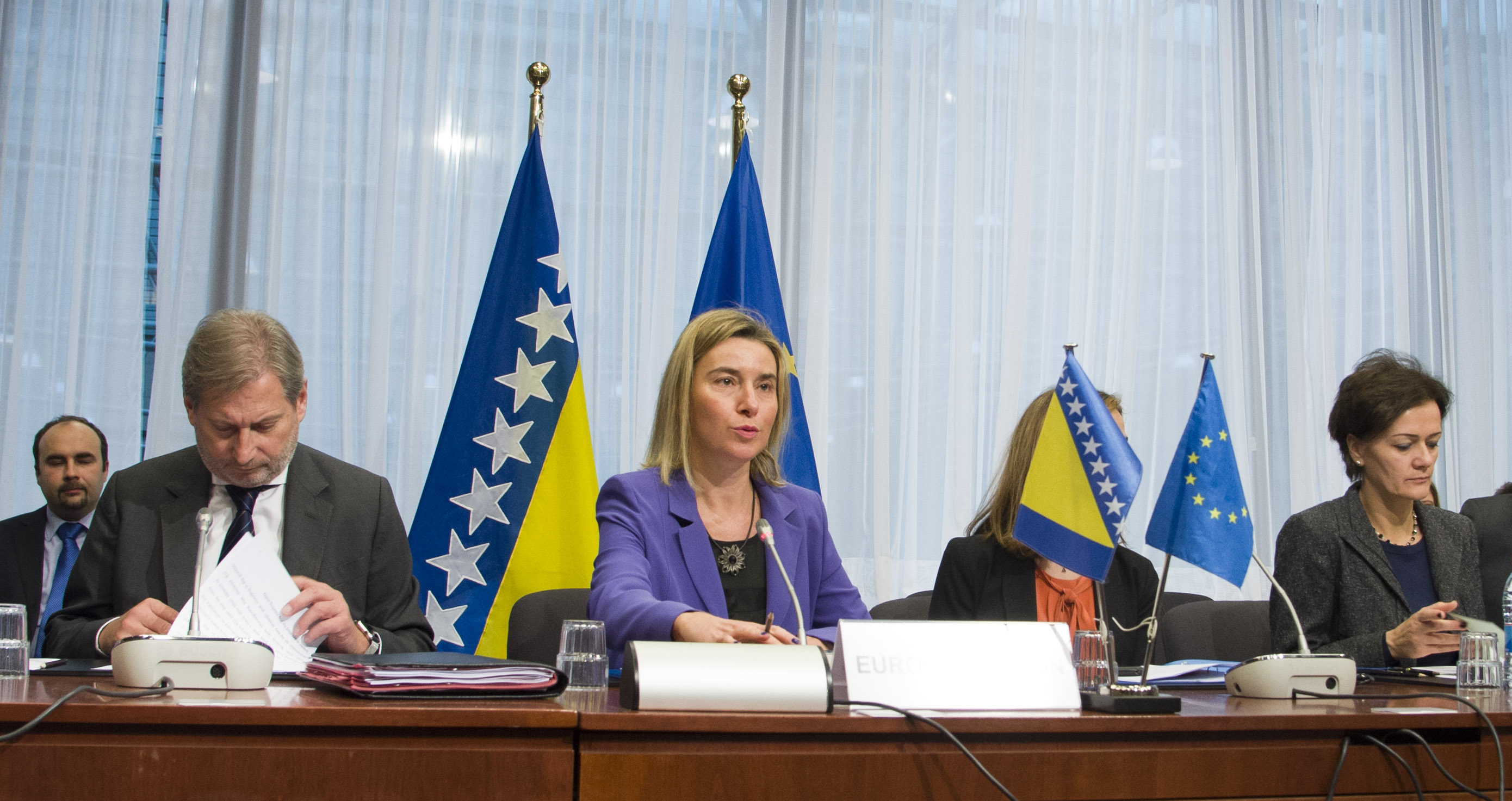 Federica Mogherini, in the centre, and Johannes Hahn, on the left (in the foreground)

First of all, I can really confirm and subscribe what both of have said. It was a very constructive meeting, it was a premiere. For the first time we had this Association Council and certainly not for the last time. Indeed, I would like to stress, first of all, what has been said by Mr. Zvizdić. It is about now to have a coordination mechanism in place, in force, which allow us, which allows Bosnia and Herzegovina to have a regular cooperation, discussions and dialogue with us. In the run-up of  this European path is absolutely necessary to have a mechanism which allows Bosnia and Herzegovina to speed up in their aspirations and, therefore, I really welcome all the efforts to find a solution which mirrors the situation, the tradition, the understanding in the country. But allows, on the other hand, to look forward, to look into the future of the country, in particular into the European future.

I also welcome the commitment of the government to respect, to be in line with our methodologies and on the other hand we have reassured the government that immediately we will be available on the technical level to sit together and to see how we can support the country meeting all these requirements and challenges, but on the other hand we would not have the SAA if it is not also an opportunity for the country itself and, in particular, I would underline what a German has said it is about the economic development of the country.

Yesterday I had the pleasure to be in Belgrade to, so to say, celebrate that on Monday we will officially open chapters and Prime Minister Vučić told also to the public that this has already attracted the interest of companies from outside Europe, such as Korea, to invest in the region, in the country. And I am pretty sure that also for Bosnia and Herzegovina if so to say this cooperation with Europe becomes more and more stronger, tougher, in a positive way, this will also support EU efforts to attract foreign investors and it is a further development of rule of law and everything that is related to it. So one should not underestimate the very positive effects of this close cooperation already in the run-up of the future membership, in order to boost the economy, to create jobs, to give people – in particular young people a perspective – and we also notice with pleasure that apparently the high unemployment rate is already started to decline. I think this is already a first result of the momentum we have gained over the past couple of months and I hope this continues.

The next months will be definitely about implementation, implementation and once again implementation. This is important and it is also the pre-condition to submit a credible application at a time when it is appropriate for everybody because it should be received as an application at the right time allowing also our Member States to follow up on that. And I think we have to work together on that and once again we would like – and I think I can also speak on behalf of the High Representative – to recall that we are ready to support you. And we also discussed – both the High Representative and myself – we are both coming from countries which have a great experience with regions, with municipalities, with a high level of decentralisation, so I think we both have a good understanding about the complexity of a country and there is no interest to change things in substance. And we are ready also  to communicate on this in order to support all your efforts. Once again, thank you for what you have done so far, but once again now it becomes tougher and tougher in the way we have to implement. Thank you very much.