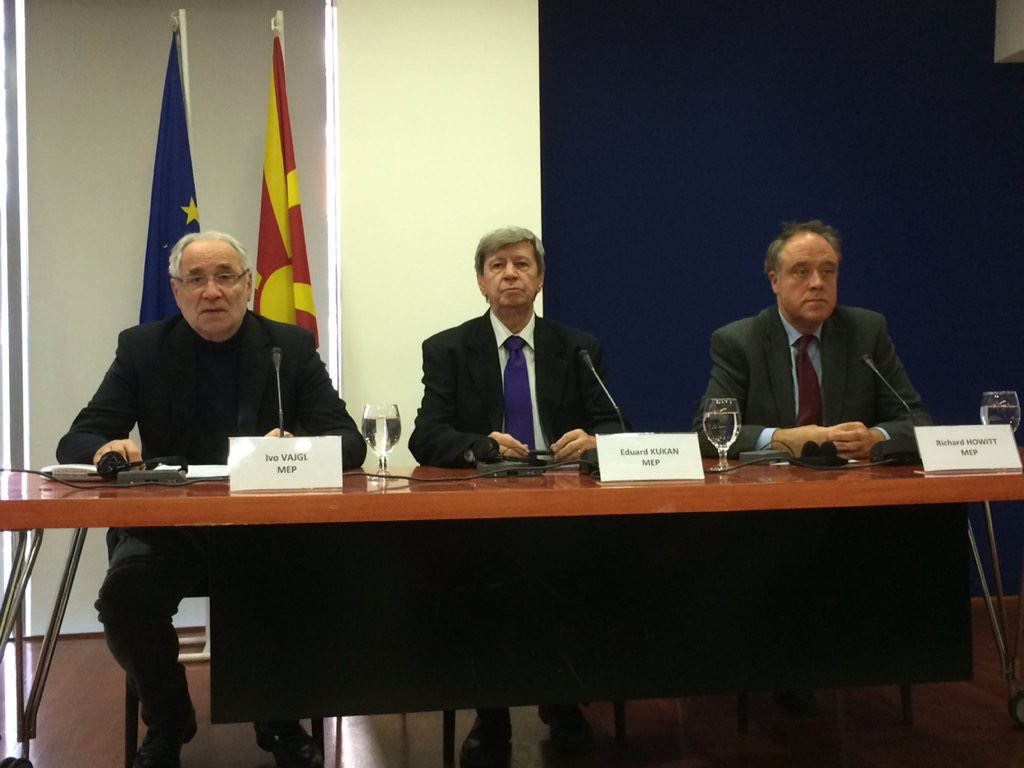 BRUSSELS / SKOPJE – During their visit in Skopje on 11-12 January, Members of the European Parliament Richard Howitt (S&D, UK), Ivo Vajgl (ALDE, SI) and Eduard Kukan (EPP, SK), EP mediators for the implementation of the Przino Agreement between political forces in Skopje, called in a statement today on all the parties to spare no time and effort to implement swiftly all outstanding aspects of the agreement.

We strongly urged all political party representatives to spare no time and effort in implementing the Przino Agreement and the urgent reforms. We underlined that this is a political priority which is still required to move the country beyond the recent political crises. The full dedication and focus of all parties on the remaining steps of the agreement is critical. As such, we encouraged all parties to swiftly act to prepare the voter register, with an agreed methodology for a credible level of field checks and to take steps in enhancing media freedom.

We called on all parties to use the discussions this week with the European Parliament and the European Commissioner to secure agreement on the implementation of all outstanding issues.

We reaffirmed that there must be full support in the country to enable the Special Prosecutor to conduct her work.

We expressed concern about delays and some retrograde steps in relation to urgent reform priorities, and emphasised the aspects of the Przino Agreement which refer to structural reforms as well as the need for all parties to engage in the Working Group convened by the European mediator on a continuous basis including during the election period.

We are convinced that taking these measures and fully implementing the Przino Agreement (and making substantial progress in implementing the urgent reform priorities) is the way to meet the democratic aspirations of its citizens as well as for maintaining a positive recommendation to open accession negotiations, ensuring Euro-Atlantic integration and a European perspective.

Considering the importance of these elections in making progress on the Przino Agreement and to the future democratic development of the country, we expect the European Parliament to be present around the elections as a further demonstration of our commitment and solidarity with all citizens.

Will the ICTY’s acquittal of Vojislav Šešelj heighten tensions in the Balkans?