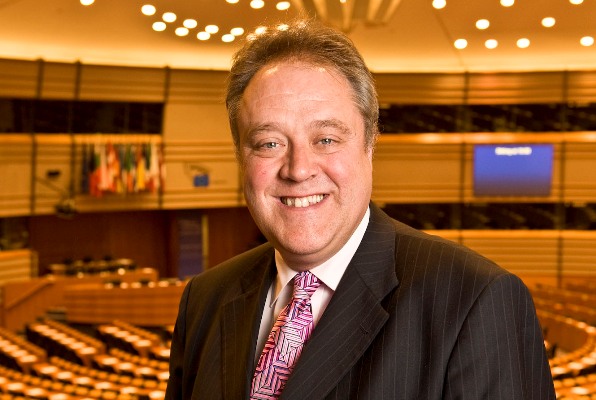 Transcript of statement by Richard Howitt MEP at the Press Conference by European Parliament mediators for fYR Macedonia, EU Info Centre, Skopje, 12 January 2016.
Good morning, I’m Richard Howitt MEP and I’m proud to be here with my fellow European Parliament mediators to try and assist in this country which we love and which jointly we want to see as a future member of the European Union.
This week you will see combined international diplomacy and pressure from the European Union, from our friends and colleagues in the United States, from us directly in the European Parliament and later this week from our colleague the European Commissioner for Enlargement and Neighbourhood policy, Mr Hahn.
Each of us is saying exactly the same thing to this country and to its politicians: that the only future is based on full implementation of the Przino agreement.
It is not being fully implemented or we would not be here.
It must be.
That must include the resignation of the Prime Minister.
It must include structural reforms, as well as the other parts of that agreement.
On the most contentious issues that have been discussed between the parties this week, we say in our statement jointly today that there must be a credible level of field checks for the voters’ list for the elections. We also say that we believe it is still possible to make progress in relation to the structural reforms, in particular with relation to the freedom of media.
Although there are some long term changes that need to be made, we believe that it is possible for further short term changes to be agreed which can make a difference in terms of having a level playing field in relation to the election.
I’ve been and we’ve been very struck by work of the working group between the political parties, convened by our EU colleague, Peter Vanhoutte. He has our full support and confidence.
One of the things we say today to the political parties and we have said to their representatives, is that we want full engagement in that working group, even during the time of the election period, difficult though that is.
We say this because we are concerned that in some of the EU’s urgent reform priorities for this country, that there has either been no progress or actual retrograde steps.
We also want to express support and confidence in the work and mandate of Katica Janeva, the Special Prosecutor, who we also met.
We express concern that she told us that the courts have been obstructing evidence being passed over to her in relation to the so-called coup case and potentially in other cases. We appeal for all evidence to be shared with her and for support for amendments that she is bringing forward to the law on protected witnesses, to support the autonomy of her role in this society.
Two final points.
First, the President of the State Election Commission, told us that in order to meet their obligations under the Przino agreement, it would require some level of what he called “improvisation” or “improrivizira”.
I have to say that causes some concern in relation to the credibility of the elections.
Secondly, you will see from our statement today that we say that the full honouring and respect for the Prizno agreement is in the democratic interest, and that of the Euro-Atlantic perspective of this country.
I want to say, its fulfilment can help in terms of the resolution of the name issue. The Commissioner believes that and we believe that too.
But the failure to do so does cast in to doubt the positive recommendation for the opening of EU accession talks for this country, with the consequences for the economy and for investment, that would follow.
Those warnings must be heeded.
The Przino agreement must be implemented in full.
In response to questions, Richard Howitt MEP added:
I join with my colleagues and endorse their statements and I simply want to add this: We know that there has been a deep democratic shortfall in this country and the political crisis is a reflection of that.
But we believe it can be different, we believe this can change and we believe that the citizens of this country and its future deserve that.
That is why together, jointly, across any political differences which we may have, we come with common encouragement to the country and to make a joint appeal to all of the political actors here to undertake their responsibilities.
A new vision for Macedonia is possible.
previous post