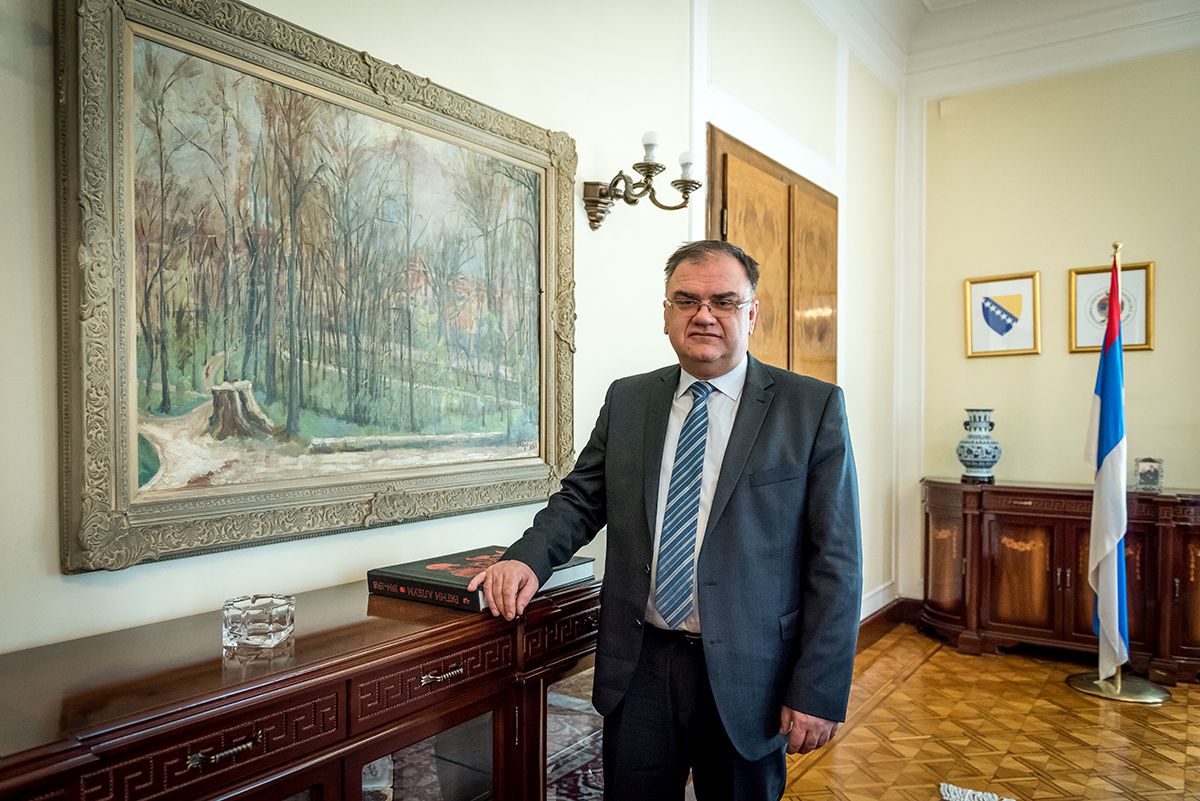 This time European Western Balkans spoke to Mladen Ivanić,  Member of the Presidency of Bosnia and Herzegovina. He was chairman of the presidency from November 17, 2014 until July 17, 2015.

European Western Balkans: Mister Ivanić, thank you for your time for this interview. To begin with, we ask all of our interviewees what the European Union represents to them. How do you perceive the EU?

Mladen Ivanić: For me the European Union represents a broader space with certain rules that primarily can help Bosnia and Herzegovina. Why? Because by entering the EU, Bosnia and Herzegovina would receive rules developed by a third-party, thus making the internal differences less relevant. Also, it is a good economic space, which from an economic perspective, is the most important.

EWB: This year Bosnia and Herzegovina will apply for EU membership. What are you next steps in submitting the application for EU membership? What difficulties does BiH encounter in the process of faster accession negotiations?

Mladen Ivanić: As far as the application for membership goes, that is a common stance on all governmental levels. There is absolutely no dilemma about it and all political actors agree on it. This common stance is defined by signatures of all political leaders and a unanimous decision of the BiH Parliament. This might be the only decision that was reached unanimously. Although we have signed the Stabilization and Association Agreement (SAA) seven years ago, it was ratified just last year. This happened as a result of the work of the Presidency but also because of the common statement I previously mentioned. We are currently in the preparatory phase for submitting the application for membership and expect a positive reply by the end of this year, beginning of the next at the latest, which would grant as a candidate country status.

When we talk about difficulties, it is above all a question of efficiency of decision-making within BiH. It happens often that we are slow with making decisions. I would say the problem is also the concept of BiH itself. Some political actors within BiH are still dealing with the past and internal conflicts, and less with what should now be the essence, which is adjusting our legal framework to the European one and the internal situation within the EU. Therefore, it is a whole array of reforms that need to be agreed on so that our economic, political, legal and judicial systems can adapt. These are the key challenges. There is a number of personalities to which the EU does not suit and they would more than anyone want us to be isolated and separated because it creates a condition in which it is the easiest to manipulate people and stay in power.

EWB: You mentioned reforms, one could say that the British-German plan unlocked many processes in BiH. What is the content of reforms implemented through this plan?

Mladen Ivanić: Objectively speaking, the EU made a huge leap when it comes to BiH accession. What does this leap represent? All these years since we signed the SAA, we have been dealing with the internal organisation of BiH. This means that there have been attempts to change the Constitution, attempts to look at things regarding internal organisation differently, attempts for BiH to have one only president. Of course, none of this was realistic, and thus no agreements were reached. We have spent ten years on internal conflicts and things for which it was known from the start that they would never work. Europe became aware of it and then said, mostly because of the British-German initiative: “Ok, leave the Constitution aside. Those are things about which you will not be able to agree in the near future. We shall not deal with this anymore. This is not a condition of progress of BiH towards the EU. The condition is economic reforms, and those are the things in which you should have a common interest.”

After we have signed the aforementioned statement, a set of economic reforms was agreed with European institutions, the IMF, and the World Bank, which was adopted last summer and began to be implemented. That was the condition for us to be able to submit a credible membership application and to be granted a candidate status. This is the essence we are dealing with now. About 70% of these laws have already been changed, and one of the main ones was the Law on Labour. Reforms encompass different areas, such as pension security. What is important is that there is a consensus, that we are working on this and that these are the issues BiH is seriously dealing with.

EWB: It is a fact that the legal system of Republika Srpska is better coordinated with the EU acquis communitaire than the one of Federation of BiH is, as well as of the national one. Is a positive “spill-over” of this trend possible, from one entity onto the other?

Mladen Ivanić: I have to point out that this is a consequence of the Republika Srpska structural simplicity. Hence, Republika Srpska has a Government, a Parliament and a President, and decision-making is a lot simpler. This goes to show that Republika Srpska is not the legal problem of BiH functionality, much bigger problem are relations within the Federation. This was not preceived before because this political assumption existed that Republika Srpska is a problem. It turned out to be the opposite, that the problem are the internal relations (within the Federation). Even now during the preparation for candidacy we are in conflict with our partners from the Federation about the method of coordination. The multilevel government coordination problem was solved easily between the entities and BiH, but it is far more complicated when it comes to the cantons and the Federation of BiH. Therefore, this is all a consequence of internal relations. I think that this can also be overcome if the key personalities are truly devoted to the European path. If on one hand then say it, but on the other hand they are not truly European-oriented, there will always be some excuses.

EWB: How much are the neighbours helping BiH on its European path?

Regarding our neighbours, there used to be an idea that Croatia has taken a fair stance in support of BiH deciding for itself. However, lately I believe that strong, positive stance to be coming from Serbia. Serbia said one sentence that is simple, but essential – We love Republika Srpska, but we respect territorial integrity of BiH and we shall not do anything to jeopardize it. I find this to be a very fair and honest approach, and if they both really endorse this, and I am under the impression that they will, than this will be very beneficial for BiH.

EWB: It seems that the view from Banja Luka on Sarajevo is different from the one on Sarajevo from Brussels. How can you as a member of the Presidency influence this dialogue and mutual understanding?

Mladen Ivanić: It is my role to try to build better internal relations and spread trust as much as I am able to. A precondition for functioning of BiH is building trust in order to have less conflicts. I think that the Presidency has lately made a serious step for the better, which can be seen in the fact that during the last year, the time since it started functioning, has not been a problem at all. Members of the Presidency do not cause conflicts and arguments. I believe these to be prerequisites for creating greater trust. Without more trust, we will not amount to anything serious. Also, trust-building is a prerequisite for calming the situation in BiH.

EWB: Wider European public cannot always understand the reasons for having referendums in Republika Srpska and everyone interprets them in their own way. What is your opinion on this?

Mladen Ivanić: I believe that Republika Srpska has the right to hold a referendum, that is the first and a very important thing. Secondly, I find that the judiciary system in BiH is not good, that it is under immense political influence and that this was objectively pointed out by international representatives. I think that the judiciary was a mechanism of political action of international representatives in BiH and this has not proven to be a good thing. However, I do not support organising a referendum right now. I do not believe that it would produce a solution. We know the results of the referendum. If it happens, 90% of citizens of Republika Srpska will say that they do not accept imposed decisions of the High Representative, especially the decision about forming the court and the prosecutor’s office of BiH. My key question is: What happens the day after? Since the government of Republika Srpska did not say what comes after, because they do not have a concept nor a vision of steps to follow, I cannot be the one to promote the referendum.

EWB: Lastly, could you please comment on the role of the EU in BiH? Also, to point out where the EU could help more.

Mladen Ivanić: When we are talking about the role of the EU so far, it has mostly been one of principle and formality. It was not one of essence. It seems to me that with the British-German initiative, the EU is starting to take on a more essential role in BiH. So far it has been mostly on the part of the Office of the High Representative, which represented a compromise in certain stages of US, Russian and even EU politics. After this initiative, the EU began a more serious influence. I think that is predominantly because of its own political interests. Since the EU is dealing with a crisis in Libya, migrant crisis from Syria, migrants from Ukraine, it does not need an unstable Balkans. I think that all of this happened because of geopolitics.

In order for citizens to feel closer to the EU, I think that it is highly important that besides the reforms, from which the people cannot see practical benefits, more concrete projects happen. It would be very beneficial to have one or two visible projects in the region that the EU would in some way finance to show the people that EU membership is worth fighting for. I believe that a project called Connectivity, an infrastructural project in the region, is crucial in this sense. It cannot remain only a principle, but has to be concrete and real effects and a positive approach need to be seen. Without this, I think it all might be negative. Therefore, alongside this very good political phase, a realistic approach to BiH and for the time being not opening the topics on which BiH cannot achieve agreement, the EU has to aim for concretisation visible to a regular citizen.

EWB: Mister Ivanić, thank you kindly for you time. We wish you a lot of success in the future.