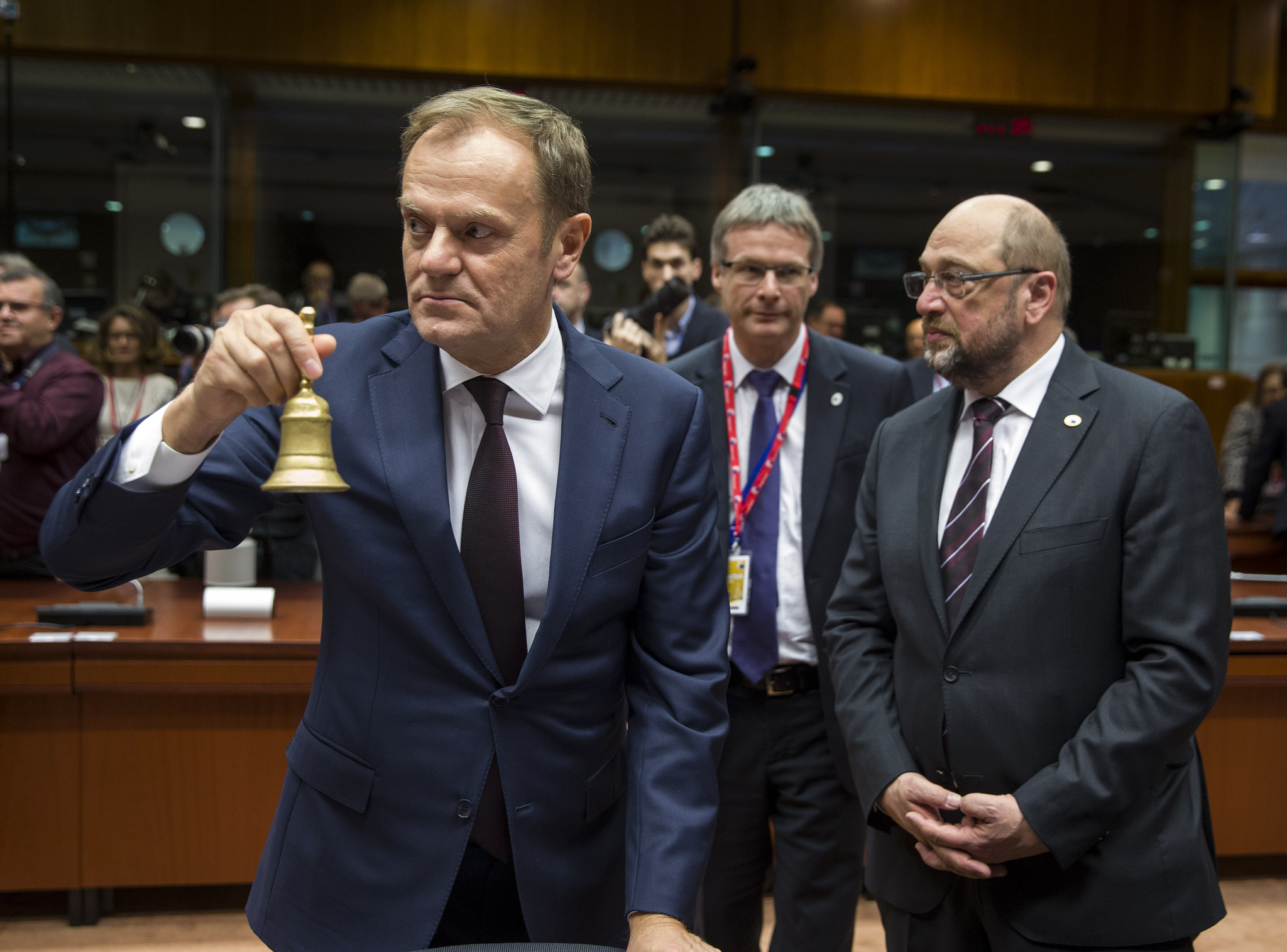 4. In response to the migration crisis facing the EU, the objective must be to rapidly stem the flows, protect our external borders, reduce illegal migration and safeguard the integrity of the Schengen area. As part of this comprehensive approach, the European Council assessed, on the basis of detailed reports from the Presidency and the Commission, the state of implementation of the orientations agreed in December.

5. The European Council welcomes NATO’s decision to assist in the conduct of reconnaissance, monitoring and surveillance of illegal crossings in the Aegean sea and calls on all members of NATO to support this measure actively. The EU, in particular FRONTEX, should closely cooperate with NATO.

6. The full and speedy implementation of the EU-Turkey Action Plan remains a priority, in order to stem migration flows and to tackle traffickers and smugglers networks. Steps have been taken by Turkey to implement the Action Plan, notably as regards access by Syrian refugees to Turkey’s labour market and data sharing with the EU. However, the flows of migrants arriving in Greece from Turkey remain much too high. We need to see a substantial and sustainable reduction of the number of illegal entries from Turkey into the EU. This calls for further, decisive efforts also on the Turkish side to ensure effective implementation of the Action Plan. The European Council welcomes the agreement reached on the Facility for Refugees in Turkey and calls on the Commission and the Member States to implement swiftly the priority projects. It also welcomes the progress on preparing a credible voluntary humanitarian admission programme with Turkey.

a) regarding relations with relevant third countries, the comprehensive and tailor-made packages of incentives that are currently being developed for specific countries to ensure effective returns and readmission require the full support of the EU and the Member States. The European Council also calls on the Commission, the High Representative and the Member States to monitor and address any factors that may prompt migration flows;

b) implementation and operational follow-up to the Valletta Summit, in particular the agreed list of 16 priority actions, should continue and be stepped up;

c) humanitarian assistance should continue to be provided to Syrian refugees and to the countries neighbouring Syria. This is an urgent global responsibility. In this context, the European Council welcomes the outcome of the Conference on supporting Syria and the Region in London on 4 February and calls on the Commission, Member States and all other contributing countries to rapidly implement their commitments;

d) the continued and sustained irregular migrant flows along the Western Balkans route remain a grave concern that requires further concerted action and an end to the wave‑through approach and to uncoordinated measures along the route, taking into account humanitarian consequences for Member States affected. It is also important to remain vigilant about potential developments regarding other routes so as to be able to take rapid and concerted action;

e) the Council adopted a Recommendation on 12 February 2016. It is important to restore, in a concerted manner, the normal functioning of the Schengen area, with full support for Member States which face difficult circumstances. We need to get back to a situation where all Members of the Schengen area apply fully the Schengen Borders Code and refuse entry at external borders to third-country nationals who do not satisfy the entry conditions or who have not made an asylum application despite having had the opportunity to do so, while taking into account the specificities of maritime borders, including by implementing the EU-Turkey agenda;

f) with the help of the EU, the setting up and functioning of hotspots is gradually improving as regards identification, registration, fingerprinting and security checks on persons and travel documents; however, much remains to be done, in particular to make hotspots fully functional, to ensure the full 100% identification and registration of all entries (including systematic security checks against European databases, in particular the Schengen Information System, as required under EU law), to fully implement the relocation process, to stem secondary flows of irregular migrants and asylum-seekers and to provide the significant reception facilities needed to accommodate migrants under humane conditions while their situation is being clarified. Asylum seekers do not have the right to choose the Member State in which they seek asylum;

g) the humanitarian situation of migrants along the Western Balkans route calls for urgent action using all available EU and national means to alleviate it. To this end, the European Council considers it necessary to now put in place the capacity for the EU to provide humanitarian assistance internally, in cooperation with organisations such as the UNHCR, to support countries facing large numbers of refugees and migrants, building on the experience of the EU Humanitarian Aid and Civil Protection department. The European Council welcomes the Commission’s intention to make concrete proposals as soon as possible;

h) all the elements agreed last December should be implemented rapidly, including the decisions on relocation and measures to ensure returns and readmissions. As far as the ‘European Border and Coast Guard’ proposal is concerned, work should be accelerated with a view to reaching a political agreement under the Netherlands Presidency and to make the new system operational as soon as possible;

i) the European Council invites the European Investment Bank to rapidly develop ideas, in cooperation with the Commission, on how it can contribute to the EU response.

8. The comprehensive strategy agreed in December will only bring results if all its elements are pursued jointly and if the institutions and the Member States act together and in full coordination. At the same time, progress must be made towards reforming the EU’s existing framework so as to ensure a humane and efficient asylum policy. To this end, following today’s in-depth discussion, preparations will be stepped up so as to allow for a comprehensive debate at the next European Council, where, on the basis of a more definitive assessment, further orientations have to be fixed and choices made.