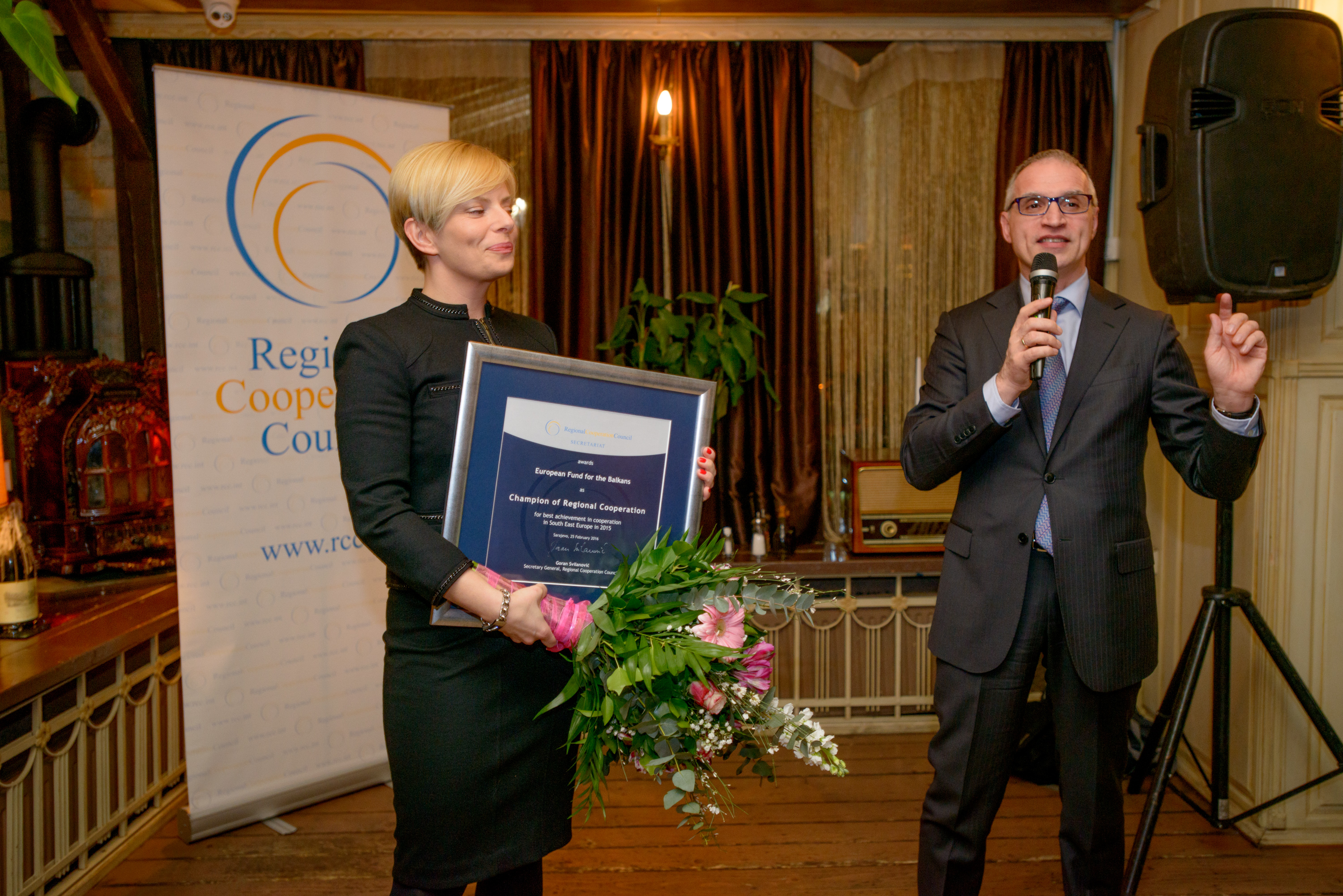 SARAJEVO – Interview with Hedvig Morvai, the Executive Director of the European Fund for the Balkans (http://balkanfund.org/ ), the recipient of the “Champion of Regional Cooperation” award for 2015. The award is a recognition of an individual or an institution that the Regional Cooperation Council considers to have contributed most to the development of regional cooperation in South East Europe over the course of the past year. The interview was conducted by the RCC PR team.

The European Fund for the Balkans has been a strong EU integration actor in the region for almost a decade now. What would you select as the best results, as your greatest achievements?

Through its programme activities since 2008, the EFB has established communication channels with high-level regional and European decision-making institutions and individuals, and rounded up the “critical mass” of policy- and opinion-makers among its community members—thus creating the pre-conditions to exercise an impact on regional policy-making. Secondly, the careful selection of fellows and partners resulted in an alumni body which accrued – within the EFB community – a social capital that remains unmatched in the region. Thirdly, our hybrid “local-European” nature, and non-partisan position, proven over the years, have provided the EFB with an aura of impartiality and credibility as well as the capacity to help build trust among regional and European actors.

The European Fund for the Balkans has a series of multi annual flagship initiatives which have become a brand in the region. The EFB developed and implemented programmes aimed at professional and administrative capacity-building of young government officials from the Western Balkans supporting initiatives which enable the youth in the Western Balkans to experience and learn about Europe; at supporting individual and collaborative research and policy development projects in the Western Balkans and at creating a policy research platform, promoting European integration and the consolidation of democracies in the region.

Staying with the EU integration process, what are the greatest obstacles, where do the EFB and all other players need to double their efforts?

More than a decade after the summit in Thessaloniki the promise of EU membership remains unfulfilled in the Western Balkans. And the longer the process is protracted, the greater the risks that elites and citizens in these countries might see the process either as hopeless or of little effect on their lives. The Balkan states have the demanding task of reconstructing post war institutions and societies, building and consolidating democracy and eventually becoming “good” member states of the EU. The Union’s enlargement strategy has managed to keep the process rolling; however the drawbacks of the current EU strategy are more and more obvious. What we see is a frontloading of conditionality in the early, pre-accession phases of the process coupled with strategic attention to specific political issues often at the expense of structural reforms and core EU conditions. This trend of retreating from agreed standards and procedures in the name of changeable priorities has reduced the speed and traction of the process, undermining its credibility in the region.

The momentum generated immediately following the democratic changes in the region in 2000 has now been halted, and the current situation can best be described as the consolidation of unconsolidated democracies. Moreover, these days, with growing Russian, Turkish, Chinese and United States’ influence, “Europeanisation” in the Western Balkan countries is no longer “the only game in town”, with its alternatives arousing serious security concerns for the states, the region, and ultimately, for the European Union itself.

The EFB was very prominent at last summer’s WB Summit in Vienna – with a highly praised study on bilateral issues and a TV talk show featuring the Prime Ministers of Albania and Serbia and the RCC Secretary General; a show which reached millions of homes in the Balkans. What are your plans for this year’s Paris summit – how will you match the high expectations from the EFB?

The EFB remains one of the key actors in the Civil Society Forum of the “Berlin Process”. It means that we are involved in shaping the civil society side of the agenda for the Paris Summit and in carrying out activities which build a continuous process between Summits and beyond. In addition to that, we continue to work on following up on the progress made by the governments of the Western Balkans in regard to bilateral relations and outstanding bilateral questions, in close cooperation with the Austrian Ministry for Europe, Integration and Foreign affairs. We hope, that the success of the Vicinities TV talk show can be repeated in Paris as well, in cooperation with our partner organisation, the Center for Democracy and Reconciliation in SEE.

The EFB has been at the forefront of Civil Society Activism in the Balkans. Where does the Civil Society stand today in the region… is it still an “enemy of  the state”, or has it been accepted as an integral part of the EU accession process?

The civil society throughout the region is in a very challenging situation. The complex socio-political and economic situation, paired with a backsliding of democracy is pushing the reform oriented civil sector into a troublesome position. That goes especially for watchdog organisations and those dealing with human rights issues; both are struggling not to be earmarked as the “enemy of the state”. In addition, lack of financial support, both local and international, creates quite a struggle for the organised part of the civil society. The attention of large international donors has long since shifted to other regions and domestic, sustainable sources of support have never been established. The Civil society as an integral part of the accession process appears to be more and more a mantra than an accepted reality. Those who manage to push through their efforts, crossing tremendous obstacles, provide significant support to the process. Which is, again, rarely recognised by the decision makers. That is why initiatives such as the Civil Society Forum of the Berlin Process are important, both as an advocacy effort and as an actual demonstration of the ways in which Civil society organisations can be valuable partners for their governments in many fields. Even some which are not obviously linked to the civil society (such as energy or infrastructure). A modern and EU oriented state needs democratic leadership including a respectful dialogue between all actors in politics and society.

How does it feel to be the Champion of Regional Cooperation, what does this award mean personally to you and the whole EFB team which is more than just its staff, but also all of the alumnae, partner organisations and – last but far from least – your parent organisations (Robert Bosch Stiftung, Erste Foundation, King Baudouin Foundation)