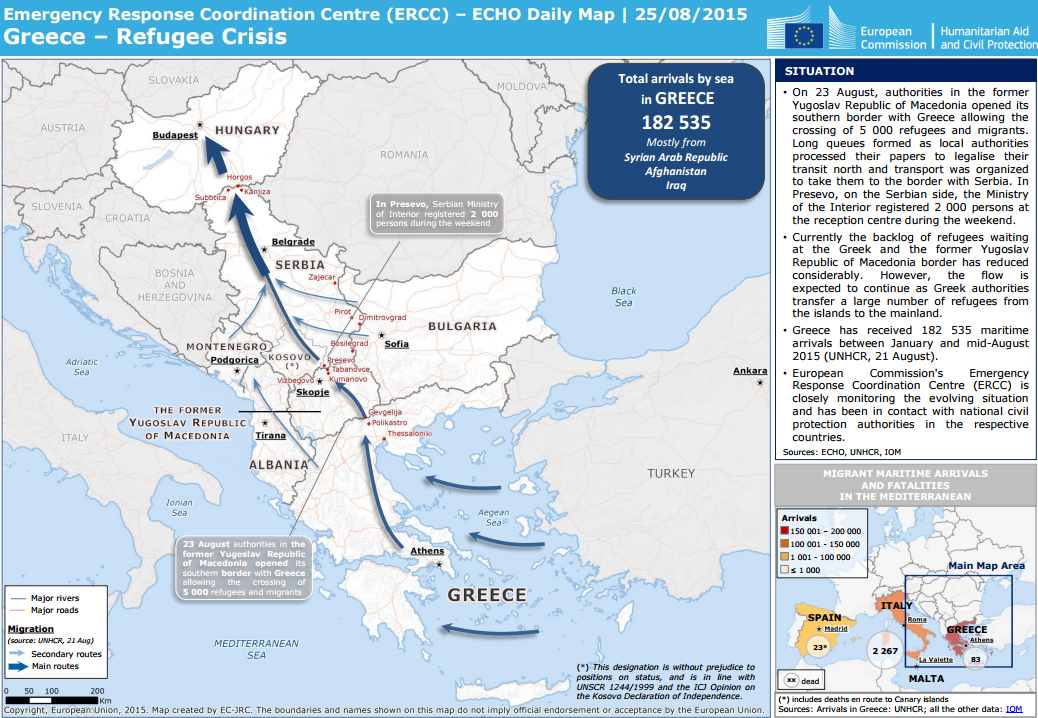 Map of the refugee crisis 2015

BELGRADE – The EU Delegation and the Humanitarian Aid and Civil Protection Directorate (ECHO) mobilised more than €800,000 for emergency assistance in Serbia in the first weeks and months of the migration and refugee crisis of 2015. In November 2015, EU Delegation awarded grant agreements to partners to start the implementation of a new aid package worth €7 million,  part of a special measure adopted on 7 October by the European Commission. The grants were developed in close cooperation with all partners and processed in record time by EU Delegation staff.

The €7 million special measure is structured as follows:

The European Investment Bank (EIB), the bank of the EU, contributed €5 million to the Migrants and Refugee Fund (MRF) recently founded by the Council of Europe Development Bank (CEB). This has enabled CEB to grant, at the end of October 2015, €2.3 million to the Serbian Government for improving living conditions for refugees and migrants in reception centres.

In addition, ECHO released €8.5 million for emergency humanitarian aid for Serbia and the Former Yugoslav Republic of Macedonia in October 2015 and a further €13 million in December 2015 aimed at supporting refugees along the Western Balkans route. Out of this package close to €10 million have been deployed for Serbia for winterization, provision of basic health and protection services, shelter and delivery of hot meals to refugees. ECHO aid is delivered by the EU’s international partner organisations including UNHCR, UNICEF, the Serbian Red Cross, the Danish Refugee Council, World Vision and others.

A regional programme worth €8 million has been launched in March 2016 to deal with protection-sensitive migration management in the Western Balkans and Turkey, mainly related to Serbia and the former Yugoslav Republic of Macedonia. The programme is led by Frontex and IOM, and is implemented in partnership with EASO and UNHCR.

In the medium and long-term, the EU will continue supporting the reform of Serbia’s asylum system and improving border controls. Projects are already being implemented or should start within the next year:

The EU also supports local civil society organisations involved in relieving migration pressures in Serbia. Currently the EU is supporting the Asylum Protection Center – APC – with a grant worth €130,000 to provide support to asylum seekers in Serbia and prevent discriminatory practices against them, with a special focus on accompanied and unaccompanied minors.

A new call for proposals worth €3.8 million will be launched this spring aiming at supporting local NGOs acting on topics related to chapters 23 and 24. Part of these funds will be made available for migration/refugees issues.

EU assistance to Serbia outlined above amounts to more than €30 million, in addition to significant support from individual Member States. The EU and the European Commission stand ready to continue supporting financially Serbian efforts on migration through further appropriate financial allocation, in particular under the Madad Trust Fund. This will address key needs such as support for voluntary return programmes.

In addition to the direct assistance to the current refugee and migration situation, since 2001, the EU has acted as Serbia’s main partner and donor when it comes to managing migration having allocated some €80 million from pre-accession funds. This assistance includes, amongst others, construction and renovation of border crossings, supply of equipment and IT infrastructure for better border management, upgrade and extension of asylum facilities, as well as assistance to improve the efficiency of the asylum system. This support will be continued with fresh financial allocations under the regular IPA 2016 budget for Serbia.