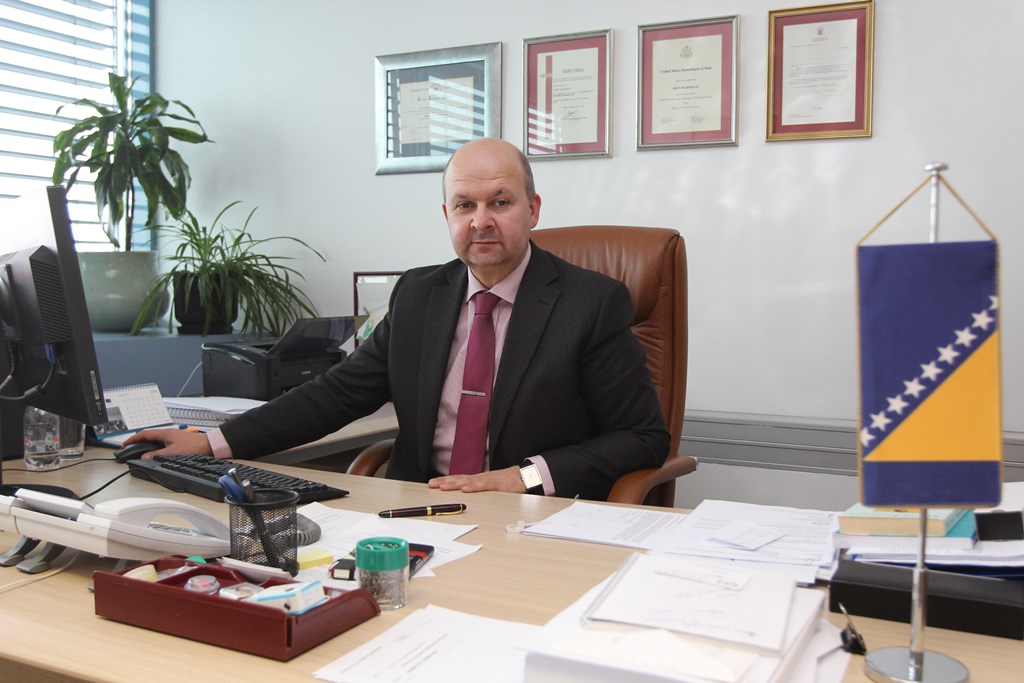 This time we spoke with Mr Edin Dilberović, Director of the Directorate for European Integration of the Council of Ministers of Bosnia and Herzegovina.

European Western Balkans: Dear Mr Dilberović, thank you for your time, we have great pleasure to speak with you.

It seems as if you have taken the reigns of DEI at the time when BiH is once again on the large Brussels doorstep. Could you tell us your impressions of the first few months of your work as the director of DEI, and are you satisfied with what has been achieved so far?

Edin Dilberović: You are completely right, BiH has indeed returned to the EU integration scene. I may quite openly say that BiH integration process in 2015 advanced more than during the whole of the progress summed up over the past few years together. The SAA has entered into force, the Reform Agenda has been adopted and started to be implemented and the provisions have been made for the export of honey, potatoes and thermally processed milk from BiH into the EU. Still, I would say that the principal change was the development of climate in which BiH is committed and willing to work on meeting the European standards. Despite the fact that for years on end we have been branded as the “case study state” and that huge amount of money and time was spent on large political challenges that however have not changed everyday life of BiH citizens, I must be content with what has been achieved so far. Although as a citizen I would like to see faster and more transparent progress, I must remain realistic. If you were a player that has withdrawn from the sport court for a longer period due to severe injuries, it would not be realistic to expect from you to perform as a top scorer during the next season league.

EWB: On 15 February, Bosnia and Herzegovina submitted the EU membership application. Could you tell us about future steps you are planning to take, given that the media forecast an offensive diplomacy of BiH towards the EU Member States in terms of lobbying their unanimous support in forwarding this application to the European Commission. To what extent has the DEI been involved in this process?

ED: Lobbying is an indispensable activity in such situations and no matter how well informed and positive our European partners are, advocating promotion of BiH interests must not ever come to a halt. I use every opportunity during the course of regular meetings with the ambassadors of EU Member States in BiH and EU officials to present the facts which support BiH intentions and commitment to the integration process. Besides its dominant economic aspect, the European Union is also a political project accepting ever more different interests upon each and every new enlargement. Therefore, there is absolutely no doubt that widely dispersed attention of the EU decision makers should be ever more often focused on BiH. The best way to ensure this result is to work on meeting the reform objectives and proving our credibility with deeds rather than words.

EWB: Prior to submitting the EU membership application, the Council of Ministers of BiH adopted a Decision on Coordination Mechanism. This Decision conferred on DEI additional responsibility to act as the secretary of the highest body (Collegium for European Integration) and to provide necessary professional and technical support to the work of other bodies as well. Have the preparations for this task taken place already and what is the planned deadline for the establishment of the bodies under the said Decision?

ED: Since its establishment, the DEI has had a coordinative role and provided professional and technical support to BiH institutions and this Decision has not introduced any new amendments to its mandate. In addition, the DEI secretary role is not a new one either given that it has already had that role for the SAA Interim Committee during implementation of the Interim Agreement. The DEI has called upon institutions to appoint their representatives within the structures referred to in the Decision, i.e. within the bodies stipulated by the SAA to the purpose of monitoring its implementation. The appointment of representatives to these structures should be brought to an end as soon as possible, not only because of subcommittee meetings, but also because this will have a direct impact on other concrete activities during the process.

ED: The National Integration Programme, i.e. an on-going planning document or whatever we may call it, is something that ought to facilitate the work of everybody in BiH, because it has been planned to contain the review of all activities throughout the process, single out the persons in charge of execution of these activities and set deadline for their realisation. If, for instance, we speak of law harmonisation, the Integration Programme would address the question as to which institution or institutions together should transpose a relevant part of the EU acquis and incorporate it into the national legislation, by which type of a legal act and under what deadline. Without an Integration Programme and without uniform harmonisation of legislation, we are dealing with the situation that is rather absurd. For instance, owing to different solutions being at stake at the moment, the shelf life of iodized salt in one part of the country lasts for two, and in another part of the country for three years for the same type of salt; this misleads consumers given that the salt as such does not have an expiration date.

The Directorate for European Integration has prepared all the methodological documents pertaining to the Integration Programme. The structure, guidelines, charts and requests for IT support to the Programme have all been prepared, as well as the initial division of the acquis. Still, the DEI nor any other institution can develop the Integration Programme on its own. Once the enhanced coordination mechanism structures have been completed, we will pave the way for the competent institutions to cooperate in the acquis analysis in terms of its division and relevance for BiH at first and after that agree upon the method and timeframe for its transposition. The same principle will be applied to all other tasks during the process.

EWB: Before and after the application was submitted, different opinions and positions could be heard from the civil society on the appropriateness of that move, as well as much criticism on the non-transparent manner of making the vital decisions on the European path of BiH. How do you plan to include the civil society in the coming phases of the BiH integration process?

ED: It is hard for anyone to tell what is the right time for submitting an application for EU membership. In talking with our colleagues from the region, we have been told that the public opinion on the EU membership application was very similar in their countries. The estimate of BiH authorities, based on the progress achieved over the past year, was that the application should be submitted, so this was done. The Earth has not stopped spinning and we still have some major challenges before us in the process. The civil society will play an important role in these and its engagement will probably be the best indicator of the democratic capacity of BiH. The civil society is already participating in the planning of the EU pre-accession assistance through the consultation process. It monitors the process and participates in communication and training activities. Upon the invitation, representatives of civil society organisations also took part in meetings to monitor the implementation of the Agreement. Anyway, just like the institutions, the civil society organisations will also need to act in unison, which in a country with more than 12,000 registered civil society organisations is much more challenging than it appears.

EWB: Are there administrative capacities in institutions at all levels of government in BiH with sufficient level of training and preparation for future stages of integration of BiH into the EU? What else do you plan to do about this issue?

ED: All future stages of the EU integration process will be first-time experiences for us and lacking our own, we can benefit from the experiences of other countries. However, the administration has a background in this field. Behind us is seven years of implementation of the Interim Agreement, thousands of pages of reports, documents, comparative reviews, hundreds of meetings with European partners. The capacities should of course be additionally reinforced, especially as regards harmonisation of legislation, knowledge of EU working languages and reporting and negotiating skills, but integration into the EU is a process of learning by doing, for which nobody was completely ready in advance. Beside the capacities, considering the complex administrative structure of BiH, the most important thing for the process is coordination among the different levels of government. The need for the somewhat famous “single voice” from BiH has already cost us a lot.

ED: Methodological preparations for the questionnaire have been carried out. Following the analysis of the questionnaires from the countries in the region, DEI has drawn up a list of potential questions. Guidelines have been developed for the institutions that will prepare answers, which should provide for good quality, clear and precise answers as well as uniform methodology. Seminars and training are planned for the representatives of institutions, as well as translators, given that the answers to the questionnaire as well as thousands of pages of legislation and supporting documents need to be translated into English. A list of potential legislation and policy documents to accompany the answers has been developed. The DEI has taken steps to create IT base. It should facilitate easy management of working documents and real time tracking of drafting the answers. It is clear that we will not have too much time to answer the Questionnaire, as was the case in other countries. It may also happen that we, like others, receive additional questions after delivering the answers. It is difficult, therefore, to foresee now all details of the workflow, but we have done our utmost in terms of methodology.

EWB: Mr Dilberović, thank you kindly for you time. We wish you a lot of success in the future, and European integration of Bosnia and Herzegovina.