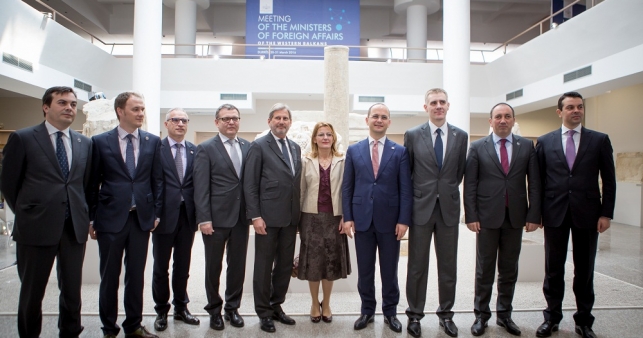 DURRËS – The meeting of Ministers of Foreign Affairs of the Western Balkan countries was held in Durres, in the presence of EU Commissioner for European Neighborhood Policy and Enlargement Negotiations Johannes Hahn, Minister of Foreign Affairs of the Czech Republic Lubomir Zaoralek as chairmain in office of the Visegrad Group (V4), French Secretary of State  Harlem Desir, the Italian Undersecretary for Foreign Affairs Vincenzo Amendola and Secretary General of the Regional Cooperation Council Goran Svilanovic.

Countries in the region reiterated the commitment to create the necessary synergy to advance in the European integration process, towards a higher level of cooperation, in the service of democracy, security, stability and prosperity in the Western Balkans.

Foreign ministers of the region, the European Commission and EU member states attending the meeting expressed their firm commitment to the ‘Berlin Process’ and the agenda of regional interconnection, as a key factor for economic growth and impact on generating new job opportunities in the Western Balkans.

Apart from talks on mechanisms how to boost regional cooperation under the EU enlargement process in the region, importance was attached to further steps that will enable new regional connection projects to be endorsed in the upcoming summit of the Berlin Process, to be held in Paris.

Countries in the region proposed a comprehensive cooperation agenda as regards refugee crisis, putting emphasis on further enhancing the EU-Western Balkans partnership on migration, which should include a reinforced political dialogue at all levels and the EU accession process as well.

Regional countries unanimously called for the conclusion of the visa liberalization process for all Western Balkan citizens.

During the press conference with Commissioner Hahn, Minister Bushati stated that today’s meeting served the coordination of measures, both at national and regional level, so that the Paris Summit be most effective in 5 key areas:

– Full implementation of measures agreed at the Vienna Summit so that all energy and infrastructure projects find appropriate funding in 2016,

– New focus on youth, including student programs and professional trainings,

– Resolution of bilateral issues in the region,

– Cooperation among Western Balkan countries and the EU to cope with the refugee crisis but also successfully fight terrorism and violent extremism,

– Need for active participation of civil society as a facilitator in the qualitative implementation of agreements regionally reached.

With regard to the regional interconnection agenda, Minister Bushati stated: “Albania was granted at the Vienna Conference support for the project on electric interconnection system with Macedonia. Today we asked support from the Paris Conference for the restoration of the railway line Durres-Tirana and construction of a branch to “Mother Teresa” Airport “.

At today’s meeting, talks also dwelt on measures for the opening of the Western Balkan Fund to be soon established in Tirana, as a new dimension of regional cooperation, as well as on Regional Youth Cooperation Office, an initiative of the prime ministers of Albania and Serbia, already agreed by all, which will be headquartered in Tirana.

EU Commissioner for European Neighborhood Policy and Enlargement Negotiations Johannes Hahn praised the stabilizing and dynamic role of Albania in the region and expressed confidence that the commitments in the framework of the Berlin Process will provide a better connection to the Balkan countries.

Commissioner Hahn expressed the support of the European Commission to finance up to 150 million euros at the Paris Summit for projects coming from the Western Balkan countries, whose approval would depend on their quality.

“During a meeting in Brussels between the Ministers of Transport and Energy of 6 Western Balkan countries and the Commission, we agreed to create a master plan in the field of hydropower. Also, we are focusing on strengthening existing energy networks in the Western Balkans “, Commissioner Hahn concluded.

Ilazi: Through the SAA, Kosovo is part of the EU membership process as all regional countries