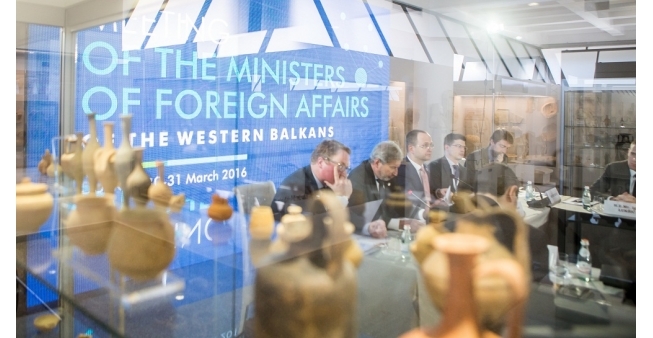 The Western Balkan summit in Vienna was successful because we managed to reach agreement on a number of tangible and important issues such as the Core network corridors for the Western Balkans.

We aim to have an equally successful summit in Paris on 4 July. This requires that we deliver on all the issues agreed in Vienna including in particular the “soft measures” on energy and transport.

It also requires that we keep the political momentum created by the Berlin process by setting new relevant targets. Tonight I willconcentrate on the connectivity elements.

I organised a WB6 Ministerial with your energy and transport colleagues on 1 March in Bruxelles.

We discussed progress on the implementation of the “soft measures” on energy and transport. It also provided the possibility for reflecting on the potential political deliverables we could envisage for Paris.

Connectivity is not only about building new infrastructure. It is also about integrating with markets to ensure better use of existing networks and infrastructure.

You can have the nicest physical infrastructure – it will still be useless without the necessary legal and technical permits, agreements, etc. in place to make full and efficient use of them. This is why the soft measures agreed in Vienna are so important: they are essential to deliver benefits for citizens and businesses.

This work is at the very heart of the Commission’s efforts to strengthen integration between the individual countries of the Western Balkans and with the EU: driving forward their European perspective through concrete projects.

It means focusing investments on establishing and improving transport and energy infrastructure and networks, and thus to strengthen the countries’ competitiveness. It creates opportunities for businesses and people, and it also contributes to developing good neighbourly relations and promoting peace and reconciliation in the region.

As we heard from your colleagues on 1 March, the track record so far has been mixed with insufficient progress in a number of areas.

The credibility of the Berlin process and the momentum of our connectivity agenda depend on maintaining progress. We have provided each country with a 1 page summarizing the commitments on soft measures you undertook in Vienna to address until Paris.

Looking at the list, clearly work has been done. It is also clear though that we need to see more efforts still in time for Paris.

The key outstanding issues for energy are:

For Transport, there has been progress in a number of areas but we have a list of examples which still need to be addressed:

Please help to ensure that your colleagues redouble their efforts on these issues before Paris.

There is also money at stake: We will soon decide which projects will receive funding under the 2016 investment exercise to be announced in Paris. We will favour those projects where all soft measures have been addressed.

I do not want to put money into infrastructure which won’t be immediately operational.

We envisage presenting a new comprehensive investment package in Paris amounting to as much as €150 million – provided that the soft measures will have been implemented by you.

I see two substantial political deliverables: the Transport Community Treaty and the creation of a Regional Market for Electricity for the Western Balkan 6.

It seems possible to have the Transport Community Treaty initialled before Paris.

On energy, we would propose that the Western Balkan 6 commit to establishing a regional market for electricity. It would build on the soft measures agreed in Vienna: another reason why they must be fully implemented.

The regional market for electricity was agreed in principle at the WB6 Ministerial on 1 March in Brussels. The declaration should be adopted at the Paris summit and we envisage a time horizon of 2-3 years to make it happen.

With this genuine regional market, it will be much easier to integrate it with the Energy Union.

Combining a regional electricity market with targeted investments will reduce the need for new generation plants by ensuring efficient use of the existing capacity. This project will also help integrate renewable energy production across the region.

In this regard, we have agreed to help prepare a regional hydro-power master-plan. We aim to organise a first regional workshop on this still before the summit in Paris.

We remain committed to providing up to 1 billion EUR for co-financing of the connectivity agenda over the period 2014-2020. In 2015 we have provided €200 million for 10 priority projects valued at €600 million.

The Western Balkans Investment Framework is the key platform to ensure close cooperation on the appropriate prioritisation of regional projects and blending of funding from all stakeholders. It has now been adapted to take connectivity co-financing on board.

We hope to be able to put together a substantial amount for the 2016 investment package, which we are planning to present in Paris. In this regard, we will carefully review your priority funding requests we have just received.

We also need to deliver on the positive agenda for youth agreed in Vienna. The Commission will organise a youth forum on 4 July before the summit. We will also present a revamped youth portal which will facilitate the information gathering for young persons from the region interested in working or studying abroad.

Finally, we are planning to launch a new pilot scheme for young civil servants from the Western Balkans, who will be offered to attend together a 4 week executive programme at Sciences Po in Paris (or alternatively the London School of Economics).

They will also be required to spend 2-3 months working in the administration of a neighbouring country.

Ministers, dear colleagues, the Berlin process has helped put focus on the Western Balkans and regional cooperation. The WB6 has ensured that it delivers concrete and tangible outcomes. Let us use this ministerial to build up speed for the final lap to Paris.