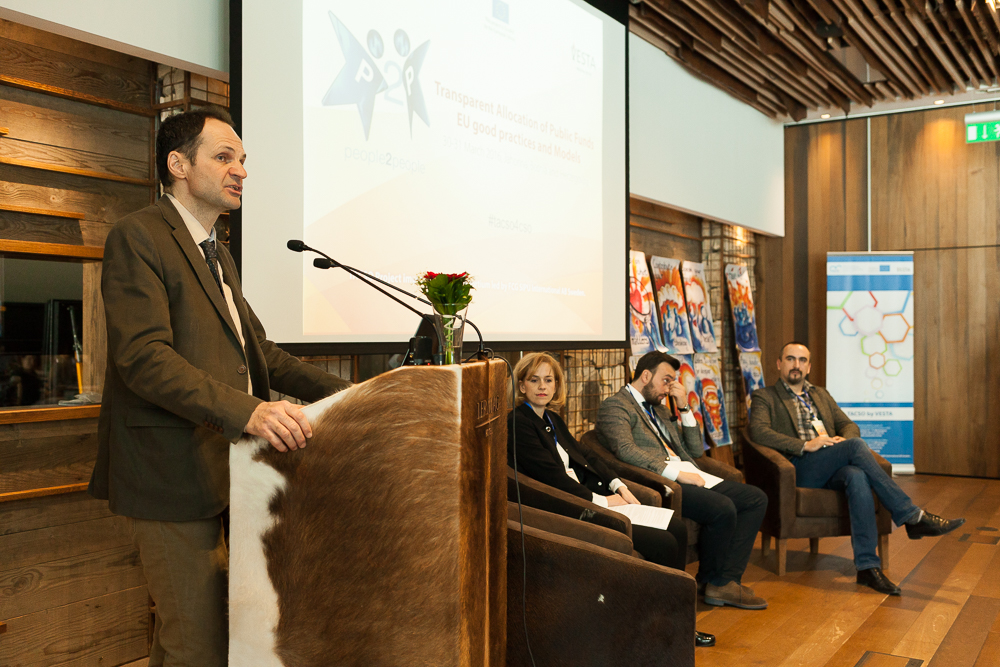 SARAJEVO – The two-day regional conference “Transparent Allocation of Public Funds – EU good practices and models” concluded today in Jahorina. It was jointly organised by the EU Project of Technical Assistance for Civil Society Organisations (TACSO) in BiH and TACSO by VESTA with the aim to examine good models and practices for ensuring transparency of public funding for the civil society.

The conference brought together more than 80 participants from Albania, Serbia, Montenegro, the Former Yugoslav Republic of Macedonia, Kosovo, Turkey and Bosnia and Herzegovina with the aim of establishing a joint platform for the Western Balkans and Turkey which will align the practices of those countries in the field of allocation of public funds with best European practices.

In his opening address Massimo Mina, Head of Operations Section for Social Development, Civil Society and Cross Border Co-operation in the EU Delegation to BiH noted the importance of transparent allocation of funds. “We, as the European Union, and in general as donors, worry so much about the way we are allocating our funds to the civil society and sometimes we forget that a much bigger envelope, much bigger funds are coming from the public authorities, from the government at different levels. And it’s even more important that these funds are allocated wisely, in a sound and transparent manner. That’s why this conference is so much at the heart of what we are doing in pre-accession countries,” said Mina.

He also added that the citizens, both individually and through civil society organisations, should be in a position not only to participate in policy-making and legislative processes but also to closely monitor the proper implementation of the existing rules and regulations.

Jasenka Perović, TACSO Team Leader, emphasised that they are not only interested in a transparent allocation of public funds but also in following the full cycle of public spending. “Both parts, the government and civil society share the responsibility for non-transparent spending of the taxpayers’ money. The countries in the region do not have a sound system in place and the civil society organisations serve mainly as social service providers,” Perović added.

Goran Kučera, Senior Adviser in the Ministry of Justice of Bosnia and Herzegovina gave more insights in the allocation of BiH public funds. “The last available and validated data from 2012 indicate that 100 million KM is allocated to the civil sector in BiH. The largest percentage, 40 percent, was allocated to sports organizations, 15 percent to the war veterans associations, 12 percent to  organizations providing social services, and only around 33 percent is shared by other organizations dealing with human rights, fight against corruption, environment and other areas,” Kučera concluded.

The conference was designed to involve all participants in an exchange of experiences and joint work focusing on finding the best model applicable to the existing conditions in each country.

The project TACSO is a part of the EU’s Civil Society Facility (CSF) which aims to strengthen the civil society as a key element of participatory democracy and encourage the development of a stimulating environment for civil society in the beneficiary countries of the Instrument for Pre-Accession Assistance (IPA).

The Price of Peace: Lessons from Northern Ireland

ALDE Group: EU perspective is vital for the future of Western Balkans