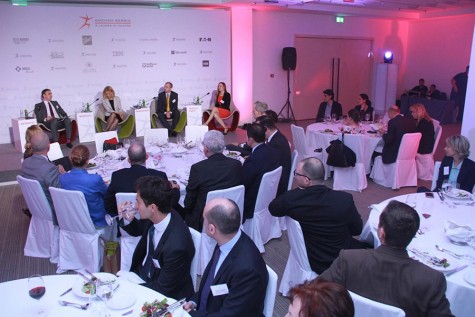 Head of the EU Delegation to Serbia Michael Davenport said it was important for future government to confirm its commitment to economic and political reforms.

“It is highly important that future government, which will take office in summer, confirms its commitment to continue reforms, both economic and political,” said Davenport during the business lunch organised by American Chamber of Commerce in Serbia.

Commenting on EU challenges and enlargement fatigue, he said the EU-28 strongly supported such policy, but apart from the official Government’s position on this issue, citizens’ views should also be discussed and taken into consideration.

Davenport and Head of negotiating team for accession of Serbia to the EU Tanja Miscevic pointed to the importance of reforms implemented on the EU path for the creation of business-friendly environment and, in this context, they particularly focused on reforms in the area of the rule of law and public administration.

Miscevic said chapters 23 and 24 where the backbone of the reform process and the basis of private and business security. Miscevic and Davenport said Serbia had good negotiating capacity, but Miscevic pointed out that next accession phases should be strengthened. They both stressed the important role of business community’s experience and know-how in the negotiations with the EU.

Davenport: EU expects Serbian authorities to give answers about Zelezara

Head of the EU Delegation to Serbia Michael Davenport told the press that European Commission was engaged in discussions with Serbia regarding the plans to sell Zelezara Smederevo and the EC expected Serbian authorities to give certain answers about this issue.

He said two days ago marked the launch of Zelezara negotiations in Brussels. “I think that Serbian delegation has presented its plans for Zelezara and I believe European Commission representatives had questions about those plans,” Davenport said.

When asked what is European Commission’s position on the use of state aid and whether its position could affect the conclusion of Zelezara contract, Davenport said they expected Serbian authorities to provide “concrete answers.”

“This is indeed about state aid and I believe we will make contact again, though I am not familiar with the exact date,” Ambassador Davenport said. On 5 April, Serbian Government accepted the offer made by Chinese company Hestil to purchase Zelezara for EUR46 million. If the EU approves the transaction, the contract will be signed on 18 April.

Miščević: It is realistic to see chapters opened in June

Hahn: Croatia consents to opening of chapters with Serbia