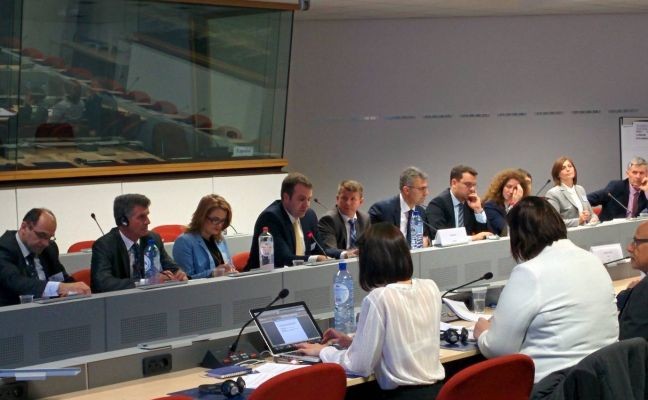 Brussels, 14 April 2016 – Trade, industry policy and policy towards small and medium enterprises (SMEs), customs, taxation and free movement of goods were the main topics discussed at the Stabilisation and Association Process Dialogue (SAPD) meeting on Thursday, 14 April in Brussels.

Both sides expressed satisfaction over the entry into force of the Stabilisation and Association Agreement (SAA) on 1 April 2016. Given that all topics discussed feature prominently and represent the cornerstone of the SAA, the meeting was particularly important also to start the implementation of the Agreement. The importance of Kosovo’s Economic Reform Programme and its timely implementation was also stressed.

Among concrete issues raised during the meeting, Kosovo’s trade integration and trade balances with its main trade partners were discussed. The Commission raised in particularly the need for careful consideration in Kosovo’s approach to the WTO. In addition, Kosovo presented the state of play in negotiations within CEFTA, in particular problems encountered during the negotiations and in implementing the agreement. The Free Trade Agreement with Turkey was also discussed.

In the area of customs and taxation, the administrative capacities and performance of both authorities were discussed. The planned merger of the two authorities was presented by the Government. The European Commission raised, in particular, concerns over the accumulating backlog of customs and tax-related cases in the fiscal division of the Basic Court in Pristina. The Commission encouraged the authorities to address the issue as soon as possible and prepare a detailed plan on solving the backlog and efficiently solving current cases. A stronger fight against the informal economy was identified as key to further economic development. As last year, the European Commission encouraged Kosovo to adopt and implement the necessary legal framework that will take into account the evaporation of petrol products upon their import. The European Commission also shared information on the EU Customs Code that will enter into force in May 2016.

As regards the industry sector and development of SMEs, the upcoming publication of the 2016 SME Policy Index for Western Balkans and Turkey and its assessment were presented. The gaps and problems with the necessary business statistics for policy purposes were also discussed. In addition, Kosovo presented the state of play of implementation of its private sector development strategy.

As regards free movement of goods, the areas of standardisation, conformity assessment, accreditation, metrology and market surveillance were discussed in detail.

The SAP Dialogue meetings, the conclusions of which feed into the next Country Report, are organised jointly by the European Commission and the Ministry for European Integration.

There are seven areas covered in sectoral meetings and they follow closely the format of the dialogue that the EU has with other candidates and potential candidates. These seven sectors are:

Under the SAA, the SAP Dialogue meetings will be transformed into and replaced by Stabilisation and Association sub-Committees.