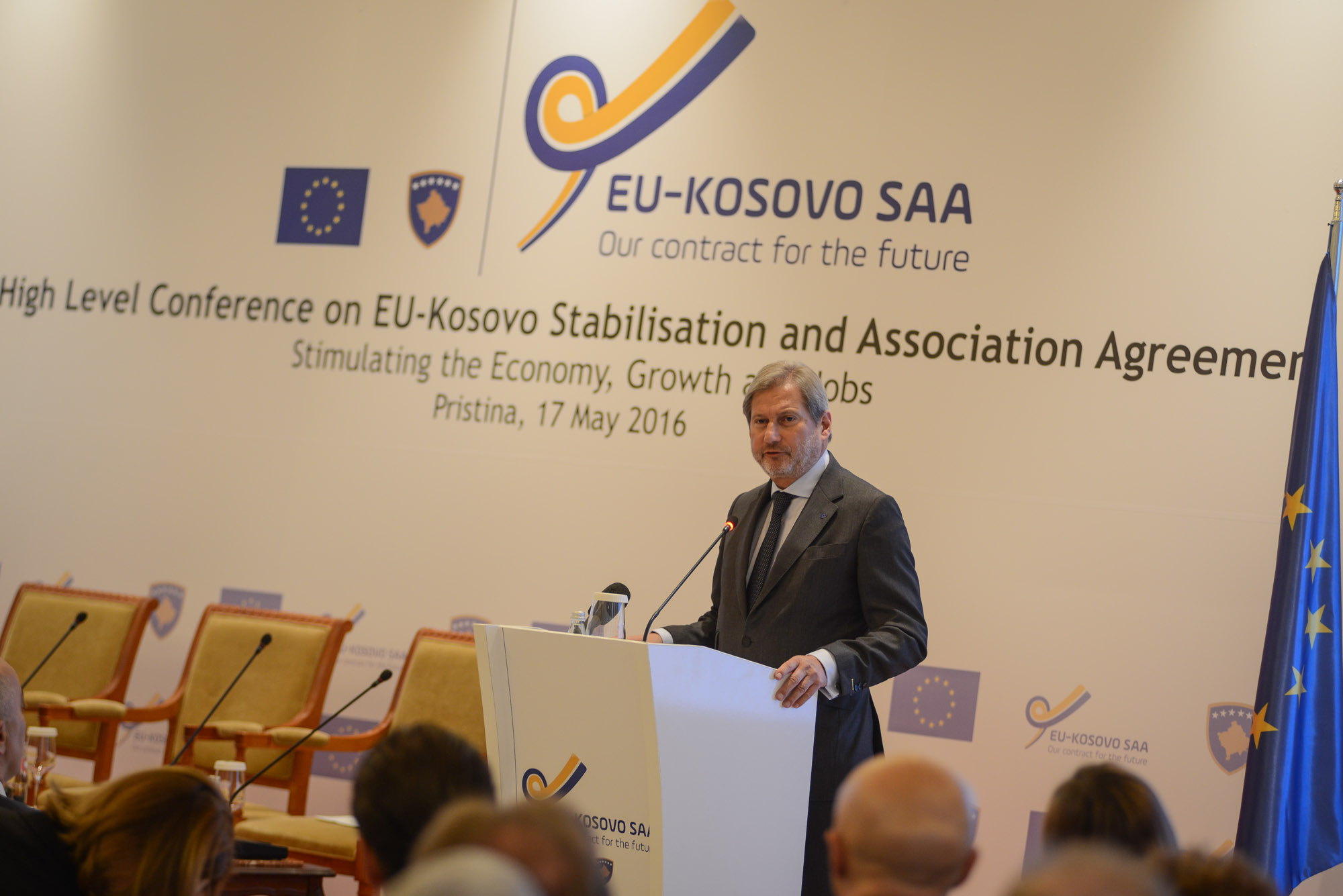 I’m delighted to be here with you today to celebrate the entry into force of the Stabilisation and Association Agreement between the European Union and Kosovo on the 1st of April.

While I cannot take credit for Kosovo becoming a member of UEFA, I am very proud that not only are we celebrating the entry into force of the SAA, we’re also celebrating our proposal of May 4th for visa free travel for the people of Kosovo.

Once our proposal is approved by the European Parliament and the Council, visa free travel should bring real changes to the lives of Kosovo citizens who would like to visit the EU for business or pleasure. It will remove walls and tie us even closer together.

But the focus of our conference today is on the entry into force of the SAA. This is a historic moment in our relationship and crucial for Kosovo’s future. It confirms Kosovo’s clear European perspective and it confirms Europe’s clear engagement with Kosovo. It is the proof that our relations with Kosovo intensify and that Kosovo’s European aspirations are real. An economically and politically strong Kosovo, in a stable region, is in the interest of Kosovo and its citizens, the Western Balkans, and the whole of Europe.

A contract between the EU and Kosovo

Most importantly, the Agreement is a contract that, for the first time:

My main emphasis today will be on the economic dimension of the SAA. But before that, let me just briefly say that politically, the Agreement includes provisions that commit Kosovo to high international standards in terms of respect for democratic principles and the rule of law.

These are not only essential for Kosovo’s European perspective, they are also basic requirements rightly demanded by your citizens.

Turning to the economic side, the Agreement provides a strong foundation for economic development and job creation:

Firstly, it strengthens and expands trade relations between the EU and Kosovo. We’re moving gradually towards the development of a free trade area by providing almost unrestricted EU market access for Kosovo products. Meanwhile Kosovo has up to 10 years to fully open its market to the EU.

The examples in neighbouring countries are encouraging. Within 5 years following the entry into force of SAAs in Albania, Croatia, the former Yugoslav Republic of Macedonia, Montenegro and Serbia, trade volumes increased by an average of almost 36% and trade deficits were reduced by over 4% in the same period.

Secondly, the SAA provides a stable legal framework and a more predictable business environment which is crucial for increasing domestic and foreign investment in Kosovo.

Thirdly, the Agreement supports the gradual alignment with EU laws and standards. For example, it promotes the free movement of goods, services and capital. This should open up business to more competition, contributing to lower prices and a larger selection of goods and services for Kosovo citizens to choose from.

SAA is an opportunity but requires actionLet me be clear: The SAA is a landmark in our relationship. However, as much as we like to celebrate this, now is not the time to sit back. Now is the time to intensify our joint efforts more than ever to make use of this huge opportunity, which is the SAA.

The SAA, if used efficiently, provides an excellent opportunity to stimulate Kosovo’s economic development and to create jobs. To make the most of the SAA, its implementation should be accompanied by a series of awareness raising initiatives, as well as by necessary economic reforms, underpinned by the rule of law.Here there is a key role for the government in:

The EU is already Kosovo’s largest investor, trade partner and donor. Since 1999 we have provided over EUR 3 billion of assistance, which has contributed to the creation of thousands of new jobs and to the improvement of the lives of your citizens.

Now the SAA will deepen this relationship. But change will not happen by itself. Making full use of the SAA needs serious commitment from all stakeholders. The issues covered by the SAA are vital for the whole country. Its implementation therefore concerns not only the government but also the opposition, public administration, business community, civil society and society at large. To be successful, a joint effort focussed on maximising opportunities will be required.

[That is why I invited political leaders to sit around the table this afternoon and discuss the issues at stake for Kosovo’s development and EU integration for the sake of Kosovo as a whole].

A key step on Kosovo’s road to Europe

The Agreement cannot fix Kosovo’s internal political problems. But it is clear that the SAA provides an opportunity for all interested parties to work together for the necessary reforms that will underpin its success.

Several robust strategies are already in place to guide this work. Not only your national strategy for the implementation of the SAA, but more broadly, Kosovo’s National Development Strategy and  Economic Reform Programme, which in a few days (25 May) will lead to targeted recommendations from the EU Ministers of Finance and the Ministers of Finance of the region.

These ambitious programmes now need to be translated into concrete actions. The task at hand might seem overwhelming. But Kosovo has demonstrated its ability to deliver on key reform measures: it has successfully negotiated the SAA and it has concluded the technical process of visa liberalisation.

What is needed now is for Kosovo to focus on a select number of reform priorities that are of common concern for all stakeholders. Together, we should monitor progress in these priority areas over the coming 12 months.

The Agreement that we celebrate today will take time to show its full benefits. The next challenge is implementation and in that regard you can count on our political and financial assistance as Kosovo continues on its path to European integration.

Hahn in EU-KS SAPC: Kosovo can make great progress by working together towards a common goal