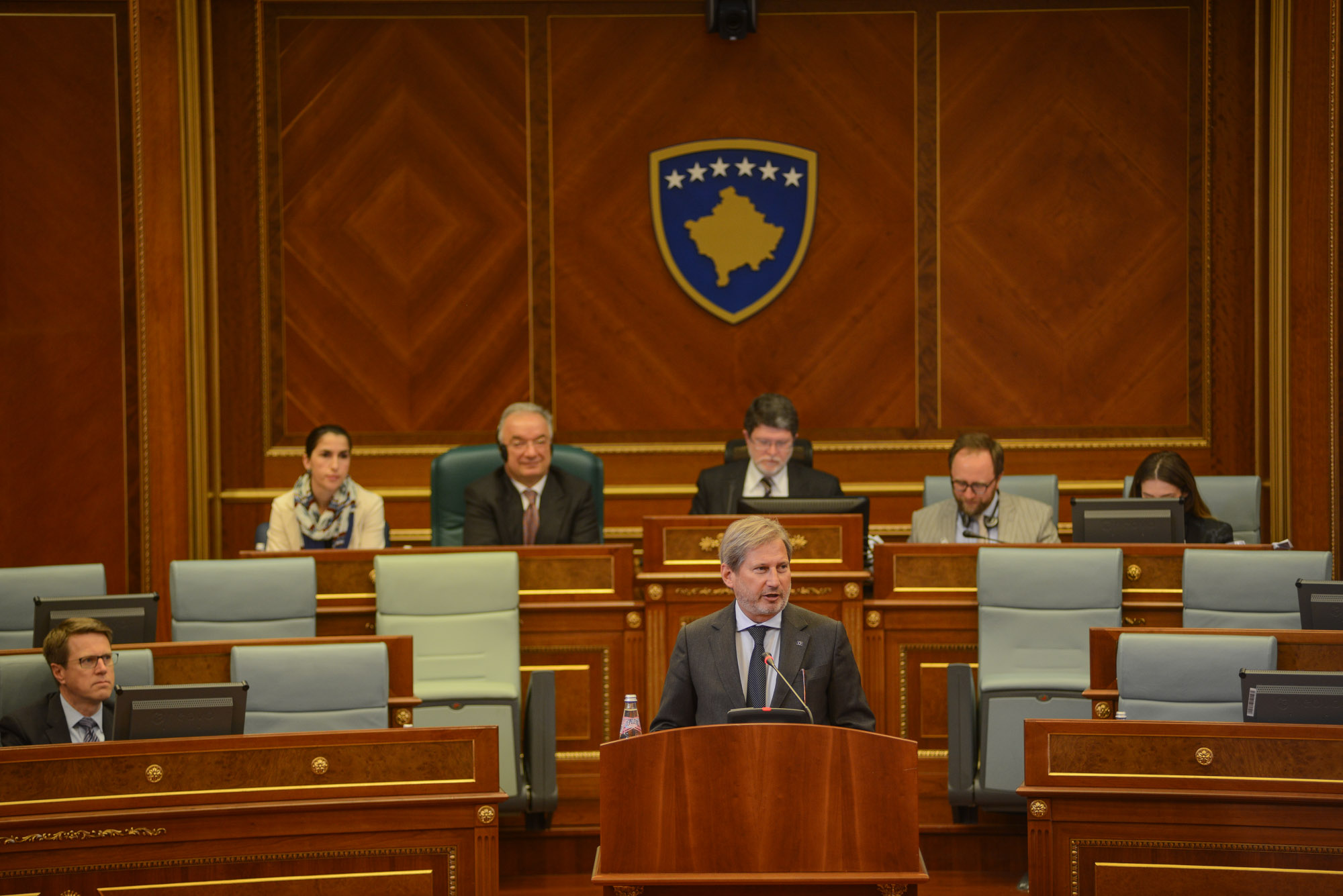 Speech by Commissioner Hahn at inaugural meeting of the EU-Kosovo Stabilisation and Association Parliamentary Committee, Pristina, 17 may 2016

A historic step and a huge success

I officially launched the SAA between the Kosovo and the EU today with the government. The SAA is a historic step and a huge success which not only marks a new beginning in our relationship; it also marks the first contractual and binding relationship between the EU and Kosovo, covering both rights and obligations.

I am particularly happy that this comes only two weeks after the Commission proposed visa free travel for Kosovo citizens, a proposal which we hope our European Parliament and Member States will soon agree to. Visa free travel should bring real changes to the lives of Kosovo citizens, opening new possibilities for exchange and dialogue.

I am happy to note that the success with the SAA and visa liberalisation is the result of the firm and unequivocal commitment of Kosovo’s politicians, its institutions and citizens to European values. It is living proof that Kosovo – and this parliament – can make great progress by working together towards a common goal.

The SAA is the basis for a deeper and wider relationship with the EU across a whole range of issues. It creates the formal structures such as this one, which will monitor the implementation of the SAA and reforms in general.

Rule of law – one of the biggest challenges

As you are well aware, one of the biggest challenges for Kosovo is the rule of law, with a number of recurring problems that need to be addressed such as the independence of the judiciary, political interference in the judicial process, and the fight against serious organised crime and corruption. With the SAA, we will enter into aformal political dialogue on these issues.

Together with other strategies, this should boost economic reform and development.

Economic reforms, as well as reforms on the rule of law, will contribute to a more predictable business environment. Combined with the predictable trade relationship that the SAA brings, this should also help to increase the confidence of domestic and foreign investors.

By supporting the gradual alignment with EU laws and standards, the SAA will, for instance, raise consumer protection standards in Kosovo.

This will benefit Kosovo citizens and improve their lives in various ways over the coming years.

But this won’t just happen by itself. The SAA is not the end of a process; it is the beginning of an era of opportunity.

It also requires strong and efficient institutions – an independent public administration, an impartial and well-resourced judiciary and other rule of law bodies and a fully functioning Parliament.

Change will not happen without serious and continued commitment from all parties. From the government and the various Ministries of course. But also from all those with  an interest in improving Kosovo including businessmen and women who push for high standards, and civil society representatives who push for democratic reforms and rule of law.

Parliamentarians have a particularly important role to play. The functioning of the Assembly has been badly affected in the past months, but I hope that we can treat this as a new start, an opportunity for political parties to put their differences aside and reconcile with each other in the interests of Kosovo as a whole.

The EU cannot fix internal political problems in our partner countries. It cannot substitute for politicians’ determination to deliver on reforms or agree on difficult issues. This can only be done by a country’s elected politicians, by you.  I therefore urge you and your parties, to look to your country’s future.

I am glad to see that the representation in this SA body is cross-party in nature, reflecting the fact that the SAA and its implementation should be a common endeavour, bringing all parties together in Kosovo’s common interest. So I’m particularly happy to see the opposition representatives here today. The recent important steps on the SAA and visa liberalisation are proof that unity can bring change. The same unity is now needed to push for reforms which are of common interest to all and move Kosovo even further on its European integration path.

The SAA demonstrates the EU’s clear engagement with Kosovo and our mutual cooperation. An economically and politically strong Kosovo, in a stable region, is in the interest of Kosovo, the Western Balkans and the whole of Europe.

So I wish you well with your work in the years ahead. The Commission will remain firmly by your side on your path to European integration.

Gruevski to Hahn: VMRO-DPMNE to support all reforms in interest of citizens