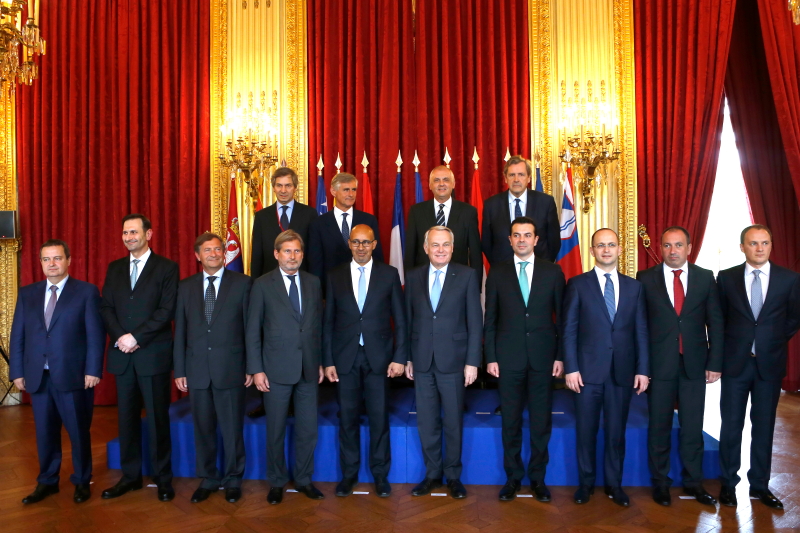 PARIS – The Foreign Ministers of the countries participating in the 2016 Paris Balkans Summit met on Wednesday in Paris. This meeting, in which European Commissioner Johannes Hahn and the European External Action Service took part, follows on from the ministerial meeting held in Brdo in April 2015 as part of the Brdo-Brijuni process, and contributes to the preparation of the Paris Balkans Summit which will be held on 4 July 2016, following the Berlin Summit in 2014 and the Vienna Summit in 2015.

The Ministers recalled the capital importance of the European horizon of countries in the region and their European integration for political, socio-economic and institutional reforms. They reaffirmed that the EU and the Western Balkans countries share the same common concerns as regards their neighbourhood, and face the same global challenges.

In this context, they acknowledged that the migration challenge requires an inclusive, comprehensive approach. Cooperation needs to be stepped up in this area, in accordance with the declaration of the mini-summit of 25 October 2015. They reaffirmed the need to focus as a priority on fighting criminal networks involved in trafficking migrants, on asylum and on strengthening border control and information exchange capacities, particularly with Europol.As regards counter-terrorism, and following the Paris and Brussels attacks, the Ministers emphasized the importance of identifying collective solutions, the only means of addressing this threat and combating religious radicalization. The challenges of radicalization, terrorism and violent extremism, particularly foreign fighters from or crossing the European Union or the Western Balkans to reach Syria and Iraq, require enhanced cooperation, including greater information exchanges, identification of best practices for training, prevention of radicalization, deradicalization and responding to terrorist activities, as well as common values. In this context, cooperation between regional countries and the European Union is increasingly important for the region’s stabilization. The European integration of the Western Balkans countries requires alignment with European legislation, but also needs to involve concrete projects in the areas of infrastructure connectivity and new prospects for young people.In accordance with these principles, the Ministers welcomed the progress made in regional cooperation. The participants emphasized the importance of connectivity in the transport and energy sectors, which is a key challenge for the region’s development and economic growth.

They acknowledged that further efforts from each country are needed to speed up the implementation of the soft measures adopted during the Vienna Summit, and welcomed the recent presentation by the European Commission of a roadmap towards the establishment of a regional electricity market. They also welcomed the prospect of the Transport Community Treaty being signed soon.The participants reaffirmed their commitment to continuing the implementation of the “Positive Agenda for Youth in the Western Balkans”, launched by the Foreign Ministers in Brdo in April 2015. They welcomed the progress already made to transform this commitment into concrete proposals. The participating countries also committed to encouraging their universities to offer an increasing number of places in cooperation programmes, as well as grants for students from the Western Balkans. In this respect, they reaffirmed, along with the European Commission, their determination to move forward in the implementation of the Positive Agenda during the Paris Summit.

Lastly, the participants welcomed the progress made in establishing the Regional Youth Cooperation Office (RYCO) and emphasized the commitment of the Balkan countries with this in mind. They recalled that this office will be officially launched during the Paris Summit.