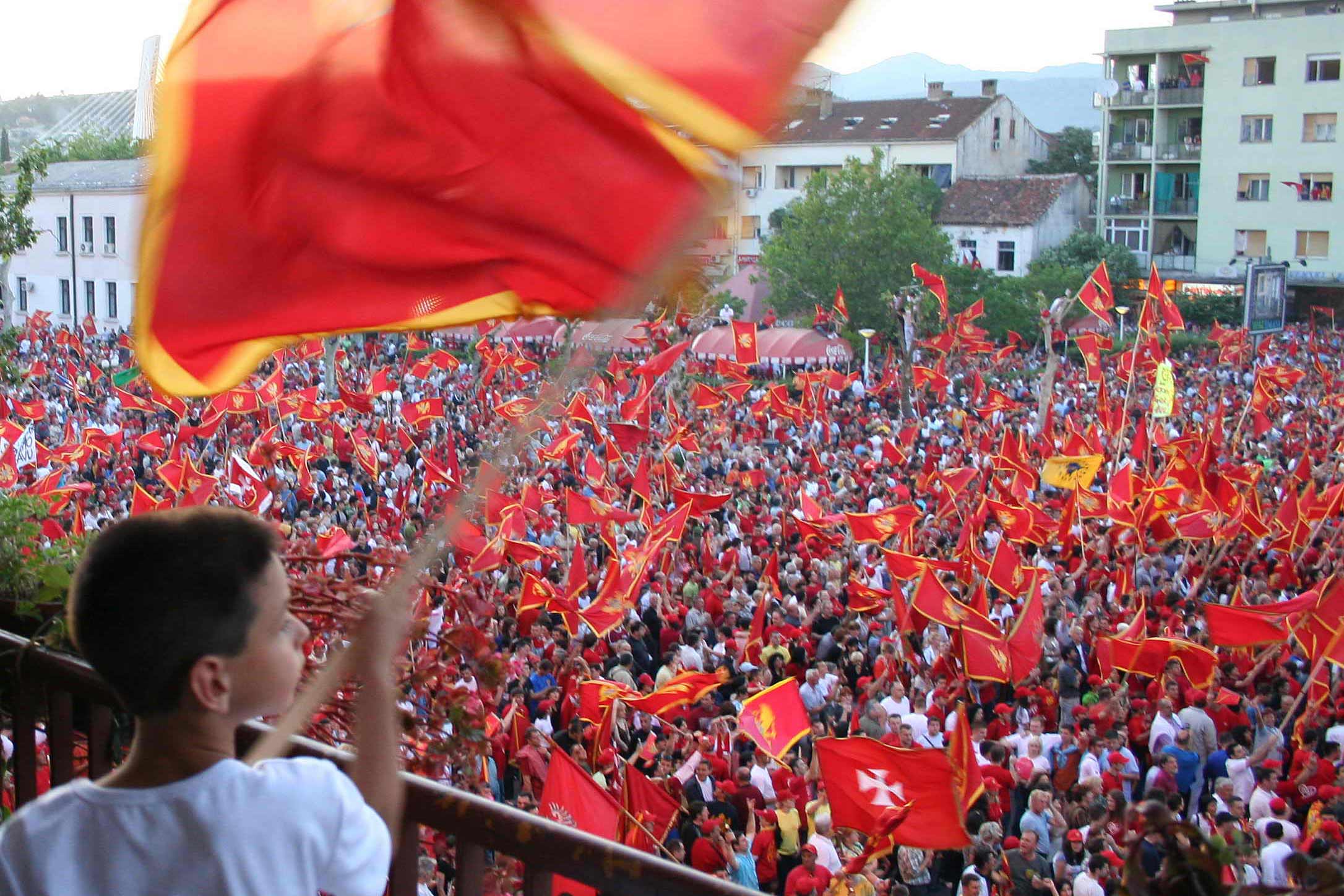 On 21 May, Montenegro marked the ten-year anniversary of its independence in 2006. A pompous celebration was organised on the capital’s main square to commemorate this landmark date. Podgorica’s Independence Square itself tells a tale of the country’s volatile history, having changed its name for the fourth time in the last 70 years in anticipation of the celebrations.

The anniversary celebrated the outcome of the independence referendum held in 2006, when Montenegrins opted for the dissolution of the short-lived union of Serbia and Montenegro by a tight margin of votes, just over the 55 per cent threshold prescribed by the EU. As a peaceful conclusion of a secession process in South Eastern Europe, it was an exception rather than a rule. And marking this milestone offered an opportunity to take stock of all that had been achieved and review how many of the bright dreams for the future, unburdened by Montenegro’s complicated federal ties to Serbia, had been realised.

From Pericles’ Funeral Oration to Lincoln’s Gettysburg address, momentous political ceremonies and rituals such as this one have always been an effective ‘political formula’ for underscoring triumphs, strengthening the political cohesion of a citizenry and reinstating the founding and guiding values, norms and goals of a polity. Albeit of lesser oratorical significance, the speech delivered last Saturday by Montenegro’s Prime Minister, Milo Djukanovic, aimed to perform the same function.

Following a decade of political learning and economic trials, Montenegro now projects the image of a leader among Western Balkan states, built on multi-ethnic stability, or at least that is what the governing elite would have us believe. And the event was yet another occasion to demonstrate one of the key reasons behind the durability of the regime – a sound western-oriented foreign policy. In the presence of many esteemed foreign guests, led by the President of the European Council, Donald Tusk, it was acknowledged that the referendum had underscored Montenegro’s dedication to its process of Euro-Atlantic integration, as enshrined in the preamble of the country’s 2007 Constitution.

Only two days earlier, Montenegro signed the Accession Protocol with NATO, ensuring that its status as the 29th member of the Alliance is now only a matter of time. From the outset, EU accession dynamics have also been positive. Three years after the accession negotiations were launched in June 2012, Montenegro has opened 22 negotiation chapters out of which two have been provisionally closed. The expectation from the Montenegrin side is that all chapters will have been opened by mid-2017.

Montenegro’s anniversary demonstrated the potential of such events to legitimise political orders and inspire allegiance – where the past is used in the present to justify the future of the incumbents in power. But it is useful to go beyond the festive surface to uncover the various threads that are being woven in Montenegro and discern how reality differs from the vision put forward by the country’s leaders – and perhaps more importantly, what this vision conceals.

The anniversary presented something of a surprise for the domestic public as “a decade of restoration of independence” was accompanied by yet another tribute – that to “a thousand years of statehood” for Montenegro. There is no doubt that today’s Montenegro is founded on a long and glorious history. Nevertheless, the government’s decision to pinpoint the year 1016 as the birth of the state seems somewhat arbitrary. It evokes the year of the death of prince Vladimir, the first ruler of Doclea (a medieval ancestor-state of Montenegro) nominally independent from the Byzantine Empire.

The notion of choosing death or defeat as the point of departure for the statehood of any country is bizarre in itself. A comparable example can only be found in Serbia, whose defeat in the battle of Kosovoin 1389 has been employed to historically ground the state and to legitimise the Serbs as a chosen people, consciously sacrificing their kingdom on earth to gain the gates of heaven. This is ironic, considering that it is the very foundational myth that Montenegro’s political leaders have tried so hard to symbolically escape during the state-building process over the last ten years.

But a bigger issue lurks: if all is well in the state of Montenegro, why involve the distant past? Why was the celebration of the referendum deemed insufficient in itself? In order to gauge the motivation behind this dual tribute to the living history of Montenegro, it is useful to go through some of the concerns over the past decade, starting from those in the domain of politics.

Djukanovic has undoubtedly dominated the political landscape of Montenegro ever since he first assumed office as Prime Minister in 1991 on his 29th birthday, thus becoming the youngest head of government in Europe’s history. He is now concluding his 7th term as PM, thereby mirroring the effect Giulio Andreotti had on the contemporary political history of the country on the other side of the Adriatic, Italy. A more cynical observer would not miss the family resemblance of the two statesmen with regards to their alleged involvement in corruption and organised crime, as well as their impunity.

Last year, the Organized Crime and Corruption Reporting Project (OCCRP) dubbed Djukanovic the‘Person of the Year’ for “his work in promoting crime, corruption and uncivil society.” This impression is mitigated by increased efforts of the judiciary to combat these phenomena, also as a result of EU conditionality – albeit without touching upon the PM’s inner circle. Only a few years earlier, the signing of aplea deal by the former second most powerful figure in the ruling Democratic Party of Socialists for his involvement in the embezzlement of millions would have been unthinkable.

Economic concerns are also pressing. In spite of economic liberalisation, Montenegro’s economy has mostly been relying on tourism as its socialist-era production base gradually crumbles under the weight of unsuccessful privatisations. State debt has been rising and has already breached the EMU golden rule of 60 per cent. The average salary of circa 480 euros fares well in comparison to the rest of the region, but is lagging behind with regard to inflation. Particularly worrisome is the youth unemployment rate, which sits at a staggering 38 per cent. This reflects the gap between education policy and market demands, in spite of the government’s success in closing the EU accession chapters on science and education.

Lastly, in line with the rest of the region, the state in Montenegro is by far the biggest employer in the country – which is significant for the issue of patronage between politicians and citizens. In a strategy meeting by the ruling party prior to the 2012 elections, one of the country’s MPs was secretly recordedstating that ‘one job is equal to four votes’. And if this is indeed true in Montenegro, then it underlines the harmful link between politically driven employment and the distortion of electoral accountability.

This year’s celebrations also took place in the shadow of an escalating political crisis. Freedom Househas found that among Western Balkan countries experiencing democratic stagnation, Montenegro has had a particularly steep downward trend, from being considered ‘free’ to ‘partly free’ for the first time since it recovered from this status in 2010. This is the result of increasing pressure from the opposition, civil society and the EU on the government to transparently reform the electoral system and dismantle the mechanisms of corruption that are suspected to have led to electoral fraud in several previous cycles of elections.

This combustible atmosphere is coupled with concerns regarding the “abuse of state funds for political party purposes,” indications that the head of government had “sanctioned the harassment of independent media,” and allegations of excessive use of force against protesting citizens. All this has precipitated the beginning of a parliamentary dialogue between the leaders of the main political parties in Montenegro, under the observation of the head of the local EU delegation. The dialogue is ultimately aiming to restore trust in the electoral process and, and, after several months of back and forth, has finally brought about a deal to form a transition government that would assure the next elections scheduled for later this year are free and fair.

Twenty-five years after the establishment of the multiparty system, Montenegro has yet to experience a democratic turnover of government. While outcome-based explanations of democratic consolidation, such as Huntington’s ‘double turnover test’, are insufficient to account for a country’s democratic record, we are still faced with an issue of the falsifiability of Montenegro’s democratic status (known as the ‘Botswana problem’). Put simply, it is impossible to assess the democratic capacity of a government that continuously wins elections because there is no empirical data on how it would behave should it happen to lose. This is all the more so when it appears that the regime is more responsive to the EU, to international capital, or to its own clientelist network than to citizens.

The commitment of local elites to the preservation of Montenegro’s independence deserves praise. However, rather than diving back into history for millennial anchors, they would be well advised to take heed of Massimo d’Azeglio’s lesson from the infancy of Italy’s modern state, which can be paraphrased as: “We have made Montenegro: now we must make Montenegrins.”

The People addressed here are not the ethnos, as all actors within and without agree that dwelling on national differences should be abandoned as remnants of the past. It is the demos – the active, self-conscious and sovereign body of citizens of the country who are hereby called into existence. Only when their ‘birth’ is concluded will Montenegro truly have a cause for untarnished celebration.

This article gives the views of the author, and not the position of EUROPP – European Politics and Policy, nor of the London School of Economics.

The original article can be found here >>>

40 years of the EPP Party