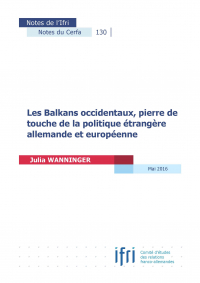 German’s policy towars the Western Balkans is marked by continuous commitment that put different emphasis in different phases: reconstruction, stabilisation, consolidation of rule of law and market economy as well as member-state building.

Since autumn 2013, the federal government CDU/CSU and SPD has set new priorities in its policy towards the Western Balkans, e.g. the British-German initiative for Bosnia and Herzegovina in November 2014 or the annual Western Balkans Summit that have been taking place since August 2014. In both cases the federal government has opted for joint initiatives with European partners or the continuation of its initiatives by other EU member states or EU institutions. France will host the Western Balkans Summit on July 4, 2016.

The Western Balkans Summits bear the potential to increase confidence into their European future among the population of the six Western Balkan countries. They also promote regional cooperation and contribute towards anchoring the necessary mechanisms for coordination and cooperation between EU member states. At the same time, they bear the risk of diverting attention of political elites away from lengthy rule of law-related reforms to mid-term projects. Germany and France should advocate the EU’s further active support for a continuation of democratic and market economy reforms in the Western Balkans.

This article has been originally published on the Ifri  (French Institute for International Relations) web page, and it is a part of abstract of “Les Balkans occidentaux, pierre de touche de la politique étrangère allemande et européenne” article form Notes du Cerfa, n° 130, mai 2016. Article has been republished with permission of the author. The original article can be found at: http://www.ifri.org/fr/publications/notes-de-lifri/notes-cerfa/balkans-occidentaux-pierre-de-touche-de-politique-etrangere