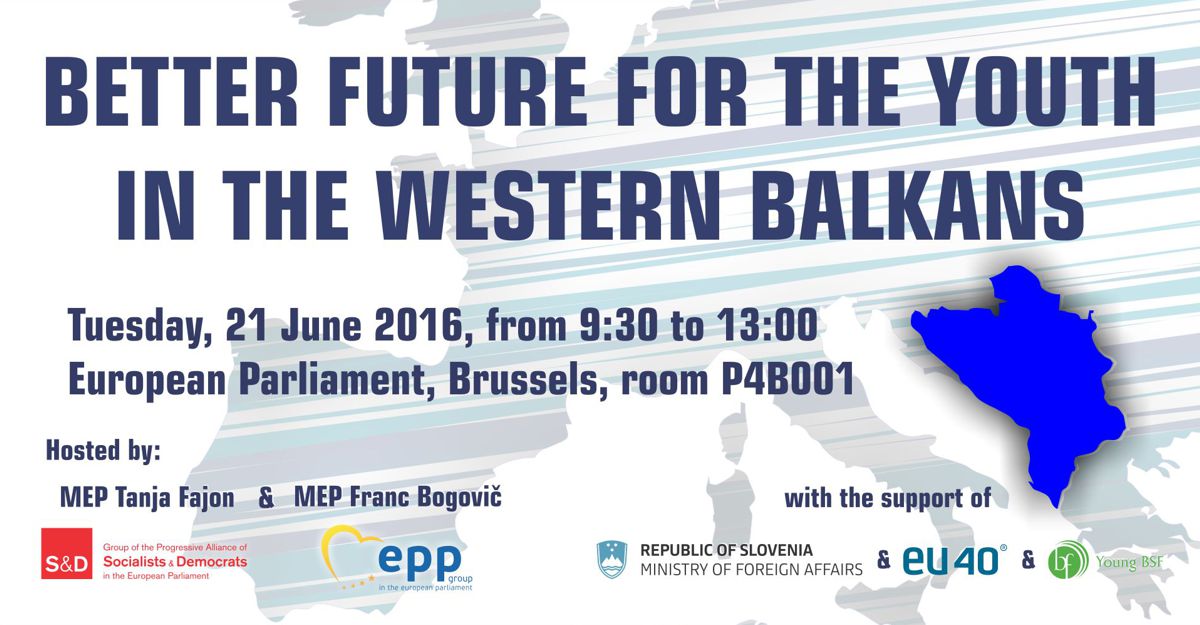 BEUSSELS – Conference “Better Future for the youth in the Western Balkans”, hosted by MEP Franc Bogovič (EPP) and MEP Tanja Fajon (S&D), will be held in the European Parliament, Brussels, on June 21st 2016.

Following the idea born within the framework of the Berlin process to improve the perspective of young generations in the Western Balkans, and Slovenia’s commitment to be a front runner in this field -which was cemented with the adoption of the Positive Agenda for the Youth in the Western Balkans at Brdo-Brijuni process summit last spring, main topic of the conference will accordingly be youth in the Western Balkans. The aim of this conference is to give additional push to this topic ahead of the next Berlin process summit in Paris in July, as well as to help improve the prospects of young people in the region by emphasizing the importance of the European perspective.

Conference will be consisted of two panels. Keynote address will be given by Mrs Corina Cretu, EU Commissioner for Regional Policy. Participants of the first panel, named “Positive Agenda for the Youth: a positive step in the right direction?” and moderated by the hosts, will be dr. Maja Makovec Brenčič, Minister of Education, Science and Sport of the Republic of Slovenia, Mr Blendi Klosi, Minister of Youth and Social Welfare of Albania – TBC, Mrs Darja Bavdaž Kuret, State Secretary at the Ministry of Foreign Affairs of the Republic of Slovenia and Mrs Tanja Miščević, Chief negotiator for Serbia’s accession negotiations with the European Union. The second panel “Balkan youth bloom for brighter future of the region”, will be moderated by Mr Peter Grk, Slovenian national coordinator for the Western Balkans and the discussants will be: Mr Muharem Bazdulj, Writer and journalist from Bosnia and Herzegovina, residing in Serbia, Mr Ardian Hackaj, Director Shtetiweb portal, Cooperation & Development Institute, Albania, Ms Zorica Stamenkovska, Macedonian Agency for Youth and Sports; representative of the Regional Youth Cooperation Office, Macedonia Mr Milan Petrović, President of Serbian Association of Managers (SAM), Serbia, Mr Janez Škulj, chairperson of the governing board of MOVIT – Institute for the development of youth mobility, Slovenia. Finally, hosts MEPs Bogovič and Fajon will give the closing remarks.

Mogherini: Serbia has key role in region under pressure