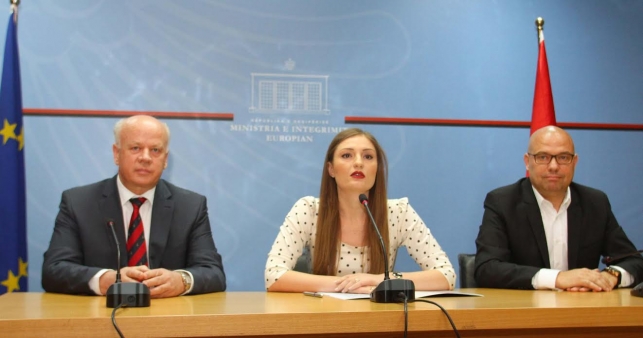 TIRANA – Memorandum of Cooperation between the Ministry of European Integration, the Supreme Court and Ministry of Justice signed. This memorandum will enable a solid track record on corruption and organized crime cases, from investigation to final decision. These data will make it possible to track the case at all levels of law enforcement.

“This cooperation is in full compliance with the recommendations of European Commission, underlining that Albania should demonstrate progress in establishing the track record of investigation and convictions on corruption and organized crime”, Minister Gjosha said in her word.

Minister of European Integration expressed her thanking to all institutions included in the process so far, such as State Police, High Inspectorate of Declaration and Audit of Assets, General Prosecutor Office, Ministry of Justice and Supreme Court.

“I take the opportunity to thank you for the will and contribution to this process. Inclusiveness of all stakeholders can advance the process of European integration. Today’s Memorandum witnesses our joint commitment to accelerate this process”, Minister Gjosha added.

Minister of Justice, Mr. Ylli Manjani said that although powers are divided according to the Constitution, the country works as a whole.

“In this point of view, Albanian state when faced with other subjects, other persons undoubtedly should be unique in providing the official statistical data. Concerns are raised several times about the way European Commission will be informed and not only with state data on the war issue against organized crime, fight against traffic as well as fight against corruption”, Minister of Justice Manjani said.

Mr. Manjani added that Albania has always been able to provide police and operational type data, but no data on the scale of punishment applied.

“So this memorandum is the instrument that makes it possible to the government on behalf of the Albanian state to uniquely report, correctly, and updated with recent data from the judiciary”, Minister Manjani added.

Chief Justice of the Supreme Court, Mr. Xhezair Zaganjori mentioned that the main problem in the justice system remains performance and efficiency particularly in the fight against corruption and organized crime, and in fact continuously in the progress reports, the European Union stressed out the need to establish a sustainable track record which would impact positively in the investigation of the criminal cases.

“Through this Memorandum, we respect these recommendations. This impacts positively to the fight against criminal offences and strengthening of inter-institutional cooperation”, Chief Justice of the Supreme Court, Zaganjori concluded.

Hahn urges removal of obstacles to flow of goods, capital