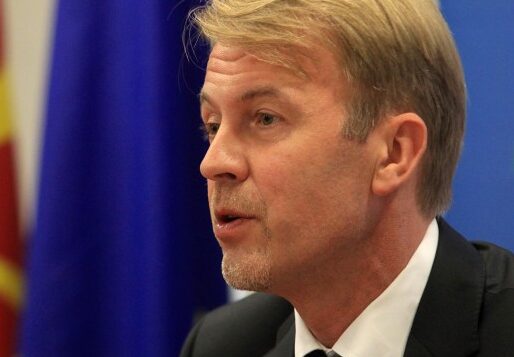 SKOPJE – The European Union is deeply concerned about the political crisis. Instead of finding a solution, the country is again at a standstill, announced today in Skopje EU Ambassador to Macedonia Aivo Orav, accompanied by other Ambassadors of EU member states.

“More than a month has passed since the Parliament has reconvened. Regrettably, we have not seen much progress to address the deep political crisis the country is in. The EU is seriously concerned about the situation.
We are united on the need to have the country’s political leadership engaging in an open dialogue. Parties need to agree on the way forward to implement the 2015 Pržino agreement, including to create the conditions for credible elections”, Orav said, reading a joint statement by all European Ambassadors.

The Ambassador stressed that in the past period, serious violations of the rule of law have been noted and he stated that this behaviour is contrary to democratic principles.

“In recent months, the rule of law has suffered further challenges, including pardons by the President of the country. Rule of law is fundamental to a strong democratic society. Therefore, it is also key that the Urgent Reform Priorities as proposed by the European Commission are implemented”, said the Ambassador.

Ambassador Orav reiterated that the no-one should interfere with work of the Special Public Prosecution and called on the authorities and institutions to stop any obstructions.

“We remain concerned about the challenges to the work of the Special Prosecutor. We call on all bodies, in particular on all parties that agreed to establish the Special Prosecutor, to stop obstructing and instead give the office their full support. Additionally, all issues that this office faces also need to be addressed as a matter of priority”, said Orav.

Regarding the SDSM’s decision to freeze its participation in Parliament, the Ambassador said it is against the tendency to strengthen democracy.

“We also recall that democracy is strengthened through full participation in institutions, to ensure their democratic functioning and greater checks and balances. We recall that the Pržino framework remains the best way to move the country out of the current crisis. We believe that it is in the interest of this country and its Euro-Atlantic path that the main political parties agree a common way forward out of the crisis in a matter of days rather than weeks or months”, said Orav.