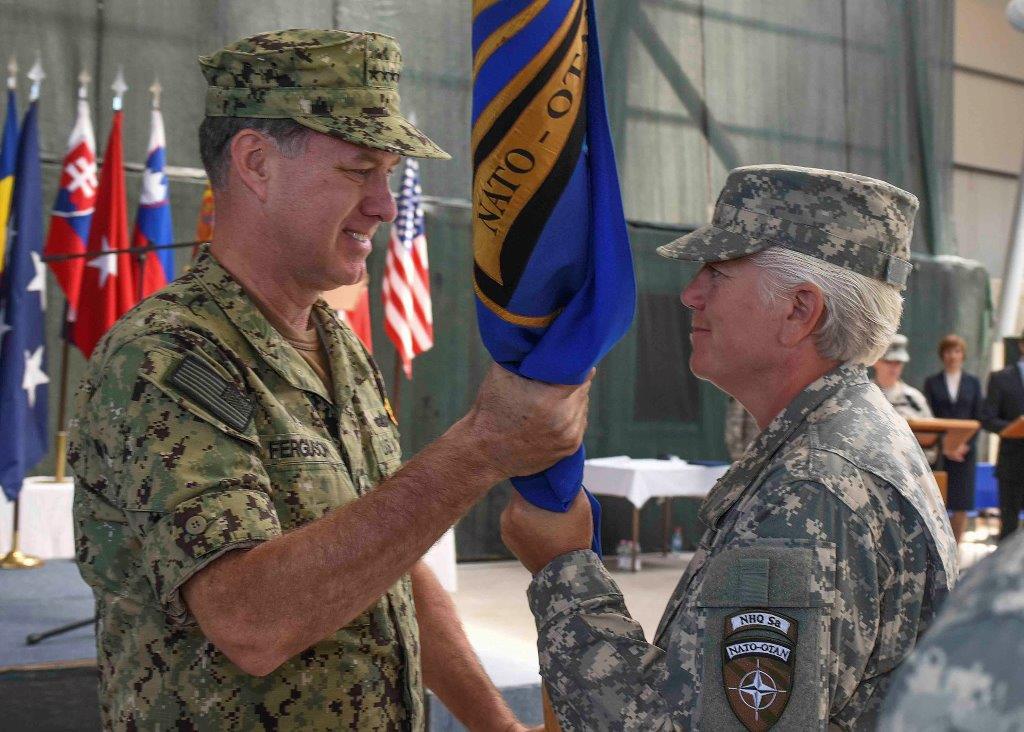 It has been a tremendous privilege to serve as the Commander of NATO Headquarters Sarajevo over the past year. As I look back on my experiences, the most prominent impression I have is the incredible potential that exists within the people of Bosnia and Herzegovina.  The diversity and resiliency of its citizens should not only be celebrated, but should be used as a catalyst to drive reconciliation and change, rather than a tool to divide, especially in their aspirations for Euro-Atlantic integration. This impression tells me that although they face significant challenges as a country, specifically the political stalemate, that they are more than capable of meeting those challenges, and building a secure and prosperous future.

It is clear that the best way to attain that is to integrate Bosnia and Herzegovina into the wider Euro-Atlantic framework:  in other words, to join NATO and the European Union.   I have had the opportunity to meet many of BiH citizens, in government, the military, civil society, students, the media and the general public, and I have learned that the country is making progress on those goals, but it should be faster, for everyone’s benefit.

Bosnia and Herzegovina has been a NATO partner for the past ten years, and has been working on many tasks related to joining NATO.  Defense reform is a large part of this, and the Ministry of Defense and Armed Forces of Bosnia and Herzegovina have shown great dedication to the complex tasks of building a single military force and developing the capabilities to operate with NATO forces.  AFBiH contributions to the NATO operation in Afghanistan have demonstrated that BiH can play a valuable international role alongside NATO members and partners.

Meanwhile the other institutions of Bosnia and Herzegovina have been working to meet wider obligations related to NATO membership.  These wider obligations are not as well-known as defense reform, but the fact is that NATO expects prospective members to carry out broad political, economic, security and legal reforms, not just reforms in the defense sector. These reforms help countries to become credible candidates for NATO membership by improving governance, security and stability, education, economic competitiveness, financial management, and much more.

Once in the Alliance, countries continue to benefit from such reforms, and they also benefit from being part of NATO’s political and military structure – the “security umbrella – including NATO’s collaborative, cost-sharing approach to defense and security issues.  As well, NATO membership is a sign that a country has attained a level of governance and security that is commensurate with Euro-Atlantic expectations, and thus a sign that a country is ready for investment and economic growth.

At this stage of the integrations process, I believe that preparation for NATO membership is crucial for people of Bosnia and Herzegovina. During the past year, I have engaged in discussions with people all over the country, and listened to their views of NATO. Regardless of whether those views are positive or negative, we have realized that there is a lack of information and understanding of the Alliance.  Together with our local and international counterparts, we are working to improve this, and I would like to use this opportunity to address one concern that I have heard repeatedly.

Many people believe that moving closer to NATO or becoming a NATO member would cause Bosnia and Herzegovina to be forced into actions that it does not support.  This is simply not true. The fundamental and founding principle of the Alliance is consensus: “one country, one vote”, whether we are talking about the United States of America with 311 million inhabitants, or Slovenia with 2 million. The principle of consensus means that each NATO member country contributes equally to the work and decision-making processes within NATO, at every level from technical committees to the senior decision-making level.  A decision reached by consensus is a decision that is accepted by each member country, thus as a NATO member BiH would retain full control over its actions.

I am confident that BiH political leaders, in whose hands the citizens have placed their future, will find a way to resolve the most immediate challenge – registration of ownership of immovable defense property to the State of Bosnia and Herzegovina – so that the country can begin working within the NATO Membership Action Plan.  The Membership Action Plan, which is an  agreement of reforms needed to meet the requirements of Membership; however, more importantly than membership itself,  are the reforms needed for Bosnia and Herzegovina to achieve its democratic commitments to its citizens, including a safe and secure environment, a defense and security sector responsive to the needs of its citizens, an environment of liberal democracy and personal liberty that contribute to political, economic and cultural development, and a functioning police and legal system where the rule of law is applicable to everyone, regardless of ethnic, religious or even political affiliation.

There is a lot of work to be done before Bosnia and Herzegovina could be invited to join NATO, but it can be done. Given the benefits of NATO integrations process, it is essential to maintain the momentum that has been built up to date and to move beyond current political and technical challenges.

Brigadier General Giselle M.Wilz is the Commander of the NATO Headquarters in Sarajevo since June 2015. Wilz has previously served at the North Dakota National Guard, where she has started her military career in 1983.

Brussels has stopped funding for Corridor 8

Kovač: Serbian law on war crimes must not apply to Croatia according to the EU common position for Chapter 23