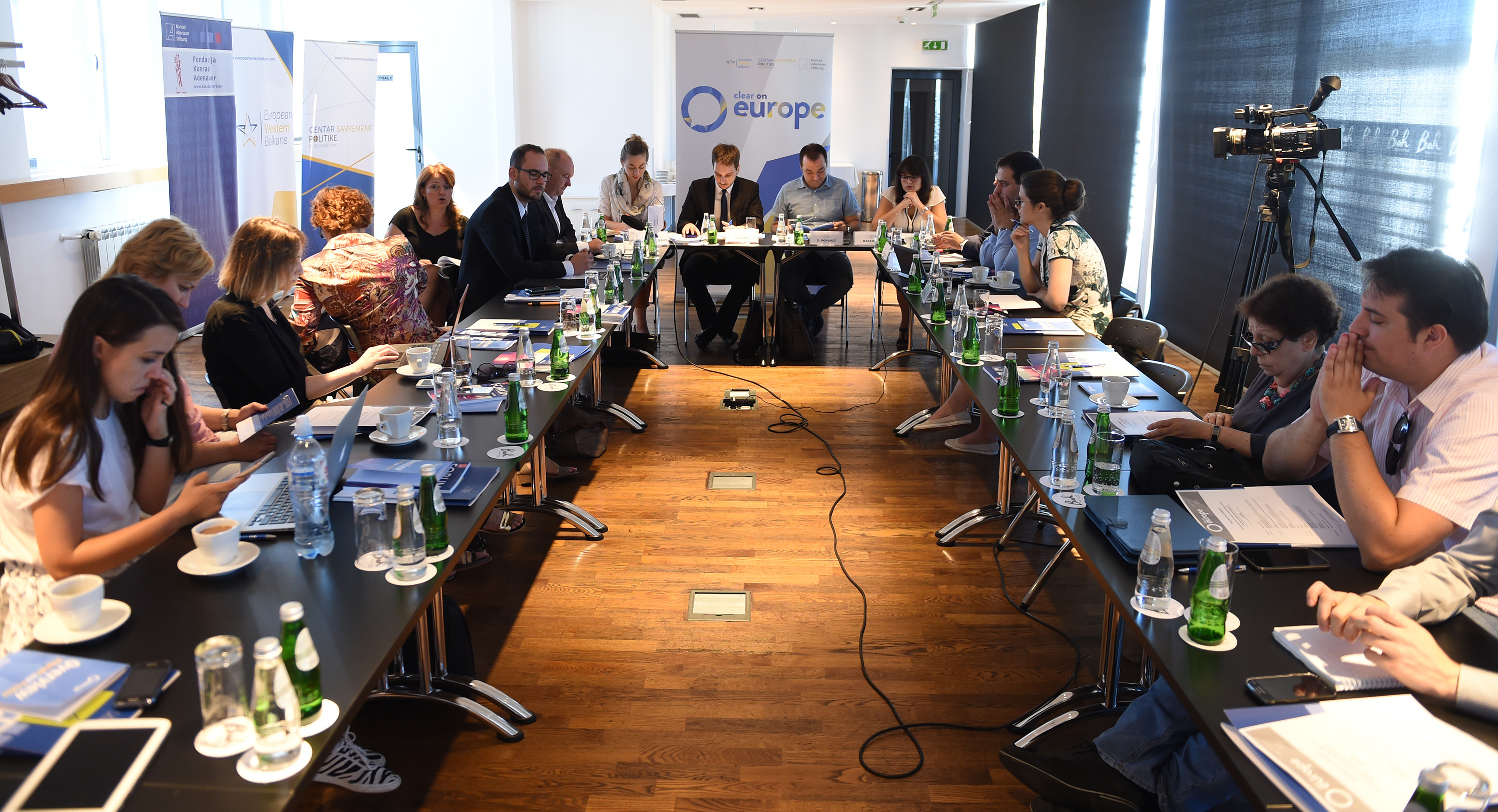 BELGRADE – The process of normalization of relations between Serbia and Kosovo, the essence of Chapter 35 in the process of Serbia’s accession to the European Union, is questionable since representatives of civil society and public and society in general are excluded from the dialogue, was the main message of a workshop, organized by the Konrad Adenauer Foundation and the Centre for Contemporary Politics on June 11th, in Belgrade. Workshop named “Normalization of relations and European integration of Serbia and Kosovo” was organized within the framework of the project “Clear on Europe! 2”. During the two panels, participants have raised many important issues concerning the relations between Serbia and Kosovo, as well as the process of European integration.

Opening remarks were given by Norbert Beckmann-Dierkes, Head of Konrad Adenauer Foundation in Belgrade, and Nemanja Todorović Štiplija, President of the Centre for Contemporary Politics and Editor-in-chief of European Western Balkans. The hosts highlighted the importance of the topic and expressed the necessity of a constructive dialogue, with the inclusion of civil society sector.

Speakers in the first session „Implementation of the Brussels agreement and further steps in negotiating Chapter 35“ were: Dragan Popović, Director at Policy Center, Ksenija Marković, Program Associate at the Forum for Ethnic Relations and Maja Bjeloš, Researcher at the Belgrade Centre for Security Policy.

The participants agreed that civil society has not been sufficiently involved in the dialogue from the very beginning. General public has been left out and deprived of any substantial information on the process, which has consequently caused distrust among citizens of both Serbia and Kosovo. It was highlighted that without transparency and the inclusion of civil society organizations in the process of normalization of relations, no long-term results can be achieved. Many more interesting questions were raised during the discussion, such as whether the EU will have the energy to deal with this issue, concerning that the process is currently stalled and the EU itself internally shaken. Also, it was pointed out that women were excluded from the process, voice of women and their organizations cannot be heard.

At the second session „Comprehensive normalization of relations between Serbia and Kosovo –What is at the end of the road?“ speakers were: Nikola Burazer, Program Director at the Centre for Contemporary Politics, Igor Novaković, Associate at the Council for Inclusive Governance in Serbia and Milica Andrić, Program Manager at NGO Aktiv from Kosovska Mitrovica. Moderator Nikola Burazer has expressed concern over the lack of sincere will for the implementation of the Brussels agreement, since its implementation affects the entire European integration process. Moreover, he added that public is not adequately informed and there is not appropriate paradigm within the society, thus, the awareness of the importance of the process is on a very low level. Burazer also highlighted that civil society sector needs to find a way to be important, relevant factor and to help make the process more sustainable.

Throughout the debate it was pointed out that it cannot be predicted what is at the end of the road, and what will „comprehensive normalization of relations“ eventually entail. Furthermore, it was noted that the conditions are worse now, in comparison to 2013 when the high-level negotiations started, rhetoric is harsher, and public opinion radicalized. It was noticed that the dialogue and negotiations are seen as some kind of a match or a competition, where one side is supposed to win, and the other one to lose. This type of a perspective certainly impedes constructive negotiation process. Finally, the issue of creation of the association of Serbian municipalities and whether they will have executive powers was discussed.

Speech by Foreign Minister Lajčák at the EP Committee AFET

Hahn: Reforms are crucial for Albania to move forward on its EU integration path