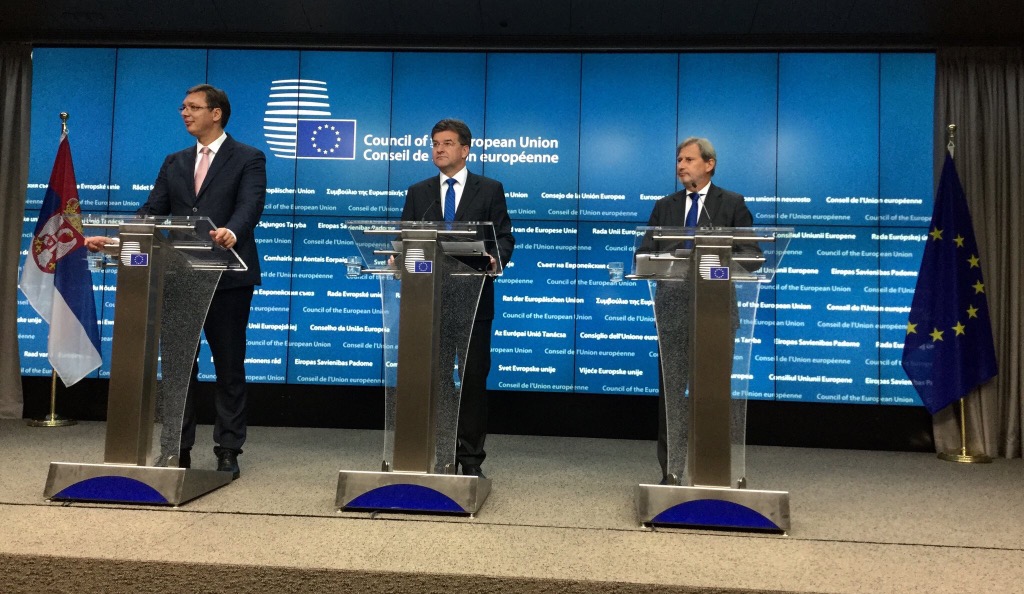 BRUSSELS – The third meeting of the Accession Conference with Serbia at Ministerial level was held today in Brussels to open two important negotiating chapters: Chapter 23 – Judiciary and fundamental rights, and Chapter 24 – Justice, freedom and security.

The European Union delegation was led by Miroslav Lajčák, Minister of Foreign and European Affairs of the Slovak Republic, on behalf of the Slovak Presidency of the Council of the European Union. The European Commission was represented by Johannes Hahn, Commissioner for European Neighbourhood Policy and Enlargement Negotiations. The Serbian delegation was led by Prime Minister Aleksandar Vučić, accompanied by Ivica Dačić, First Deputy Prime Minister and Minister of Foreign Affairs, and Jadranka Joksimović, Minister without portfolio responsible for European integration.

With today’s conference, out of a total of 35 negotiating chapters, 4 chapters have now been opened for negotiations.

“This is a very good news for Serbia – we are opening two important and demanding chapters in the accession process. These chapters are tied to basic values and principles of the EU: democracy, rule of law, independent judiciary – areas crucial for the introduction of European standards and strengthening rights of the citizens,” Minister Miroslav Lajčák has said.

He added that “today’s conference also represents a concrete delivery on one of the Presidency´s priorities – to reinforce the credibility of the enlargement. Once the candidate country delivers on the necessary commitments, the EU moves it forward in the accession process.”

The opening of the two chapters represents an important milestone in the accession negotiations with Serbia. Under the new approach, both chapters are tackled early in the enlargement process to allow Serbia to develop a solid track record of reform implementation. This will ensure sustainable and lasting reforms in the area of the rule of law.

The EU developed its common positions on the basis of the Action Plans, which Serbia has elaborated in order to fulfil the opening benchmarks for the two chapters. The Action Plans will allow the EU to assess the substantial reforms Serbia is planning in the months and years ahead, inter alia in areas such as judiciary, fight against corruption, fundamental rights, migration, asylum, visa policy, external borders and Schengen, judicial and police cooperation, and the fight against organised crime and terrorism.

Monitoring of progress in the alignment with and implementation of the acquis will continue throughout the negotiations.
A final assessment of the conformity of Serbia’s legislation with the acquis and of its implementation capacity can only be made at a later stage of the negotiations. The Conference will have to return to these chapters at an appropriate moment.
The comprehensive list of interim benchmarks for Chapters 23 and 24 are included respectively in the following documents AD 20/16 and AD 21/16.