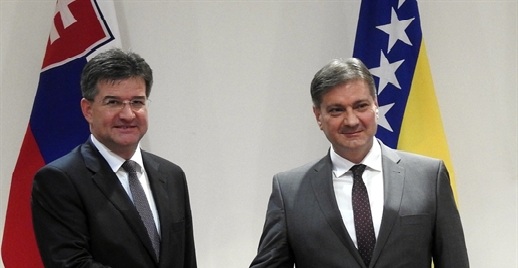 They discussed the realisation of tasks on the road of BiH towards the European Union and NATO integrations.

Chairman Zvizdić thanked for the assistance and support Minister Lajčak and the Slovak Republic extended to Bosnia and Herzegovina during the term of Slovak chairing over the European Union. He said Bosnia and Herzegovina has made a notable progress in reform implementation and that it is ready for taking over the questionnaire of the European Union to be forwarded to our state in early December.

Foreign Minister Miroslav Lajčak commended the efforts of the Council of Ministers of BiH, led by Chairman Zvizdić, and encouraged for the continuation of positive processes. He said the Slovak Republic and tis mandate at the chairmanship of th European Union, and expressed his satisfaction for Bosnia and Herzegovina is to receive the questionnaire in that period of time. He also expressed his wish for BiH to get the candidate status as early as possible and start the European Union accession negotiations.

They agreed that I the future period reconciliation processes should be encouraged, along with strengthening of the regional cooperation.

Chairman Zvizdić said the European way has no alternative and that the Council of Ministers will work devotedly on the realisation of all the tasks and obligations concerning the European integrations. He stressed that the European way is the paramount foreign policy priority of BIH, underlining how difficult and demanding process it is, filled by many challenges and difficult reform measures.

Stability vs. Democracy? The Dilemma of Illiberal Tendencies in the Enlargement Region

Fleckenstein, meetings with senior officials: Each political party has its place in parliament