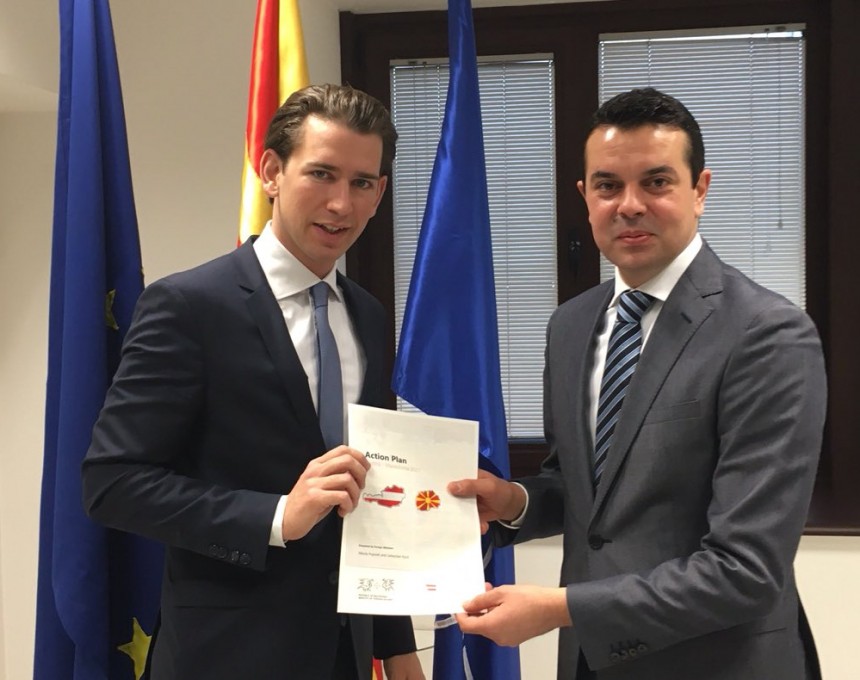 VIENNA – Austrian Foreign Minister, Sebastian Kurz’s appearance at the VMRO-DPMNE central rally in Skopje, on Sunday, came too late and was bad compensation to the Macedonian authorities for closing the Macedonian-Greek border and stopping the flow of migrants into Austria and to Western Europe, wrote Vienna newspaper “Der Standard“.

“Many have asked themselves in recent months: “What did the Macedonian government actually get for closing the border with Greece in March, so that the refugees could no longer travel to Central Europe and Germany as easily, and the great refugee crisis ended has been? The answer from Skopje has always been – nothing. Since Sunday, we are now all the wiser: the reward was now personally delivered by Foreign Minister Sebastian Kurz, who came to Skopje to support the national-conservative VMRO-DPMNE’s election campaign”, said the article in “Der Standard ” regarding Kurz’s controversial visit to Skopje.

The article went on to say, that the support of such a party indicates that the demand for democracy and rule of law are ranked very low on the priority list, and this has consequences and the European Union “is losing its credibility”.

“Most parties in Southeast Europe are like kleptocratic clubs, that provide the people with jobs in exchange for votes and lure them in with a dose of nationalism. However, the VMRO-DPMNE leads a negative ranking list: the regime in recent years has become more courageous and authoritarian, controlling the police and judiciary and wiretapping its citizens”, writes “Der Standard”.

The Belgium weekly “New Europe” has an identical attitude, and also reported that Kurz’s participation at the VMRO-DPMNE’s election campaign was to return the favour to the Macedonian ruling party for their help in closing the Balkan Migration route.

“His statement on membership directly contradicts the spirit of the European Commission progress report on the country, which talked of “state capture” of democratic institutions, violations of freedom of speech and rule of law”, reported “New Europe”.

The performance of the Austrian Foreign Minister at the VMRO-DPMNE rally was criticized by several European politicians who assessed that Macedonia needs free elections, without the influence of foreign ministers or governments.

The European Commission declined to comment on the Kurz’s visit. From Brussels, sources told Macedonian news agency “Meta” that they stand behind the statement that was given on the 18th of November by EU Ambassador Samuel Žbogar and the ambassadors of the EU member countries in Macedonia regarding the upcoming elections, which at the same time calls for the separation of party and state activities.