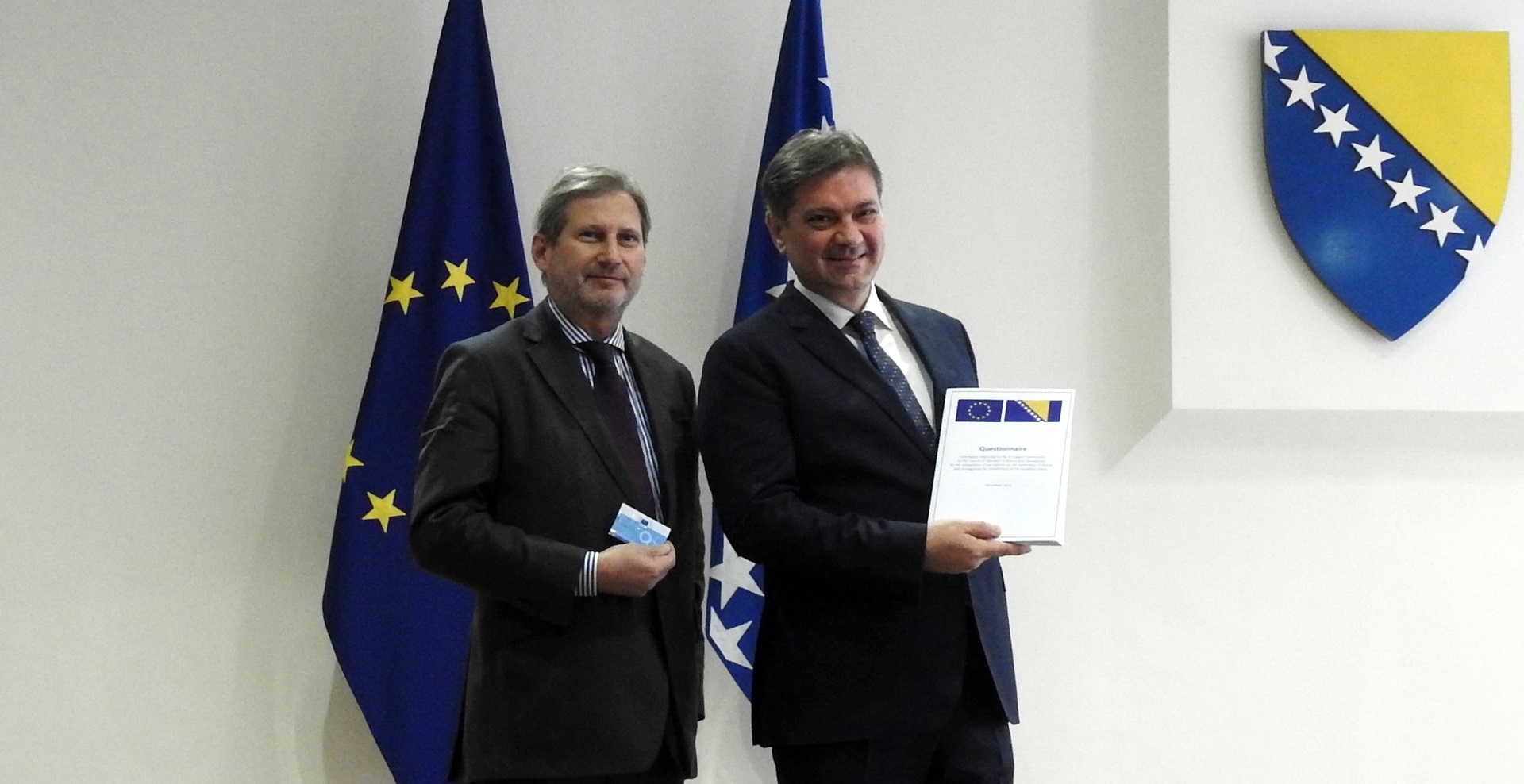 SARAJEVO – Chairman of the BiH Council of Ministers Denis Zvizdić received today in Sarajevo the Commissioner for European Neighbourhood Policy and Enlargement Negotiations Johannes Hahn who handed him the Questionnaire of the European Commission to prepare the opinion on the application for membership of BiH in the European Union.

The questionnaire for BiH consists of 33 chapters and 3.242 questions.

After the meeting with the Commissioner for Neighbourhood Policy and Enlargement of the Johannes Hahn, Zvizdić pointed out that the Questionnaire is a key precondition for obtaining candidate status.

According to him, there are no additional requirements that the European Commission set before BiH.

“That is, it is a key precondition for obtaining candidate status. There is an important fact, for the candidacy status of BiH is only important to properly and professionally in the time provided, for about six months, answer questions from the Questionnaire. There are no additional conditions that either the European Commission or any other European institution set before BiH,” said Zvizdić and welcomed Hahn who, as he said, is sincere friend of BiH.

According to him, all other conditions about which we had the opportunity to hear in the last few days, “from the closure of the OHR, international judges in the Constitutional Court and similar conditions, are conditions not defined by the European institutions and are not actual requirements for candidacy status of BiH”.

He pointed out that the answer to these more than 3.200 questions is the only requirement for candidacy status of BiH, “and that is our key objective, thus with obtaining candidate status  we could open a new chapter between BiH and the EU, in order to have access to new funds and that citizens of BiH have new benefits from the European integration process of BiH”.

“Getting the Questionnaire for us is one of the most important dates in the process so far,” said Zvizdić. As he said, the country has passed a very serious path to obtain this Questionnaire.

He added that they will continue to work very responsibly and hard on all projects. Answers will be prepared by institutions at all levels.

“The goal is better life for BiH citizens in every sense. The society of equal opportunities, society of knowledge, European BiH”, said Zvizdić.

Zvizdić said that the BiH Council of Ministers is in contact with all levels of government.

“In the next six to seven months it will be necessary to meet and at the higher level of executive power to make analysis of processes and direct attention particularly on those issues on which the EC will base the quality of answers. Answers will be prepareed by BiH institutions at all levels, and then they will go through the Coordination Mechanism thus BiH with one voice could go to the European Commission,” concluded Zvizdić.

“I want to point out that this is not something that is done to satisfy us, or services and bodies of the EU. This, indeed, is a process that brings progress and benefits to the citizens of this country,” said Hahn.

He noted that the process of the European integration, is the process that brings stability, security and peace. The consequence of all this is the increase of the level of prosperity of citizens.

“This is something that brings better prospects – that is better prospects in the country itself, without the need for population to migrate to other countries outside of Bosnia and Herzegovina. It brings jobs, very concrete benefits for citizens” said Hahn.

“We are familiar with the experience of other countries, so this is a proven and tested process. One of the consequences of the process is arrival of more investments from abroad. Foreign companies feel safer, and these things guarantee investments in BiH,” said Hahn .

Hahn pointed out that this process did not come from the thin air. “Activities were carried out, working bodies and groups were established. The coordination process began before this act. This activity is a test of the flexibility of authorities to implement the very coordination.”

European Commissioner for Neighbourhood Policy and Enlargement Negotiations also added that the “electronic version of the questionnaire looks like a credit card, and before you use it, you must charge it. I wish all the best to BiH and I hope you will answer the questions as soon as possible.”

When asked by a reporter about the spread of nationalism and extremism Hahn expressed his views.

“That is a matter of general concern. We are witnessing the nationalist rhetoric in other countries as well, not just in BiH. These things do not help with the current events. On my arrival to the Parliamentary Assembly of BiH, I met a group of students, young people, who look forward and they are interested in the future Bosnia and Herzegovina, and the region as well. ”

He said that the focus of all of us should be on improving the socio-economic situation and job creation.

“The example with the cost of drugs is a good move that brings direct benefits to citizens. People want and expect these things, not building new walls. On the other hand the issue of radicalism is much a broader issue. If we can offer young people better prospects and jobs, then I invite local authorities in Bosnia and Herzegovina, Croatia and other countries to work on that, to be creators of something and to ensure the future. This is the only response to radicalization that can be offered. it will reduce it and mitigate it. That is true for all. This is a cross-border phenomenon and as such requires the same response and reaction,” believes Hahn.