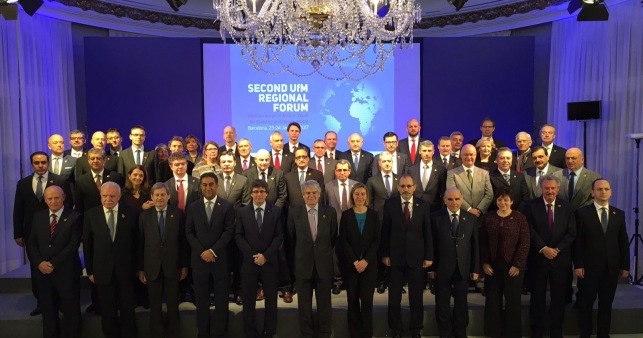 BARCELONA – Albanian Foreign Affairs Minister Ditmir Bushati attended the meeting of Foreign Ministers of the Union for the Mediterranean countries organized in the format of a Regional Forum in Barcelona, states the press release of his Ministry .

The meeting was chaired by two co-presidents of the Union for the Mediterranean, Federica Mogherini, High Representative for Foreign Affairs and Security Policy of the European Union and Ayman Al Safadi, Minister of Foreign Affairs of the Hashemite Kingdom of Jordan. It was also attended by the Commissioner for European Neighbourhood Policy and Enlargement Negotiations Johannes Hahn and Ministers of the Mediterranean region, reads the statement.

In his address, Minister Bushati underscored that: “Because of its geographical diversity and inclusiveness, bringing together 43 countries, 28 of them members of the EU, the Mediterranean South and East countries, and three countries of the Western Balkans, the Union for the Mediterranean can help us find some collective purpose and action in addressing our common security challenges”, said in a statement published on the Ministries website.

ATA reports that on the sidelines of the Mediterranean ministerial in Barcelona, Bushati penned in a posting on social network; “The conversation focused on recent developments in the region. We discussed the latest developments in the region, the stabilizing and Europeanizing role of Albanians in the countries they live in, the vision of Albania for a safe region with democratic state-building processes going on without third parties misusing them. Albania remains committed and willing to contribute to a region involved in Euro-Atlantic course,” minister Bushati said.